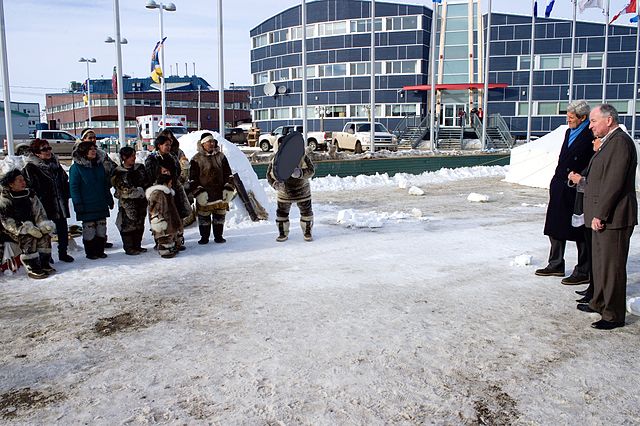 [JURIST] Canadian indigenous people, including Inuits of Nunavut and the Chippewa, were granted an appeal [docket] to the Supreme Court of Canada [official website] earlier this month, challenging the use of seismic testing to find natural gas under the Davis Strait and Baffin Bay. Lead by Jerry Natanine, the former mayor of Clyde River in Nunavut, the Canadian natives contend that they were not adequately consulted before the National Energy Board (NEB) [official website] granted a Norwegian consortium permission to test. Under the Constitution [text], the Canadian government has an obligation to consult [backgrounder] indigenous peoples when taking action that may adversely affect them. The indigenous people fear that the testing, which is described as “about 100,000 times louder than a jet engine,” will drive away native species the Inuit rely upon. A hearing date has yet to be set, but if nothing is done before the Davis Strait and Baffin Bay waters thaw, the consortium will be permitted to go ahead with testing until the Court makes a decision.

The rights of indigenous peoples is a controversial topic in North America. Last month, a New Mexico federal judge approved [JURIST report] an almost $1 billion settlement between the Obama administration and Native American tribes based on claims that the US government had for decades underfunded contract costs for tribes to manage federal services. In 2012 UN Special Rapporteur on Rights of Indigenous People James Anaya visited [JURIST report] the US in order to launch the UN’s first ever investigation into the rights situation of Native Americans. The US endorsed the Declaration on Rights of Indigenous Peoples in 2010, after being one of four member states originally opposed to the treaty when it was adopted by the UN [JURIST reports] in 2007. The other countries opposed to it, Canada, New Zealand and Australia [JURIST reports], have all also changed their views and have since endorsed the treaty. This non-binding treaty outlines the human rights issues faced by the more than 370 million indigenous people throughout the world and encourages nations not to discriminate against them. The declaration was debated for more than two decades before it was passed.