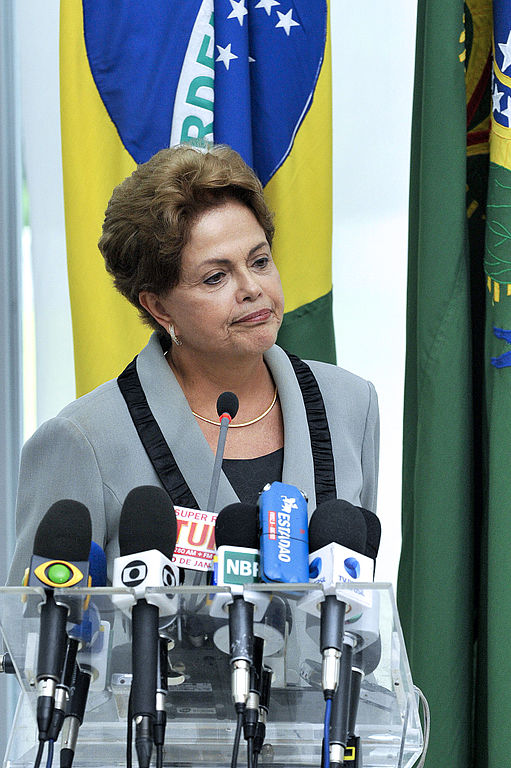 [JURIST] Brazilian President Dilma Rousseff [BBC profile], on Sunday, stated that she will take legal action against the senator who accused her of corruption charges. Rousseff stated [BBC report] that she would sue Senator Delcidio Amaral for his defamatory statements made against her. Amaral worked out a plea deal with the prosecutor over his involvement in the Petrobras [corporate website] scandal before the Prosecutor was able to secure his statements. In October, two Brazilian lawyers filed a new petition in a renewed attempt to impeach President Dilma Rousseff, alleging she forged accounts in 2014. A parliamentary commission found there was no proof [TeleSUR report] that Rousseff, her predecessor or Petrobras were involved in the nationwide scandal concerning investors’ loss of over $2 billion. Rousseff’s opponents called for her impeachment because of alleged connections to the fraud.

Brazil’s political establishment has been in turmoil as many powerful politicians including former presidents have been recently brought to the center of embarrassing corruption investigations. In March, Brazil’s Supreme Court unanimously authorized [JURIST report] the corruption charges against member of Congress Eduardo Cunha to proceed. Eduardo Cunha was implicated in the Petrobras scandal. President Rousseff herself has been implicated in that very same scandal and has been at the center of impeachment proceedings [JURIST report] for months. The opposition lawyers claimed [Reuters report] that Rousseff doctored documents to hide the size of the national deficit in order to spend more government funds as her re-election neared. The lawyers also believed she continued to forge documents in her second term and spent over USD $210 million without the legislature’s approval. Rousseff argued that the opposition is trying to impeach her to hinder government actions. More than 100 individuals and 50 politicians have been arrested in connection to the Petrobras scandal.