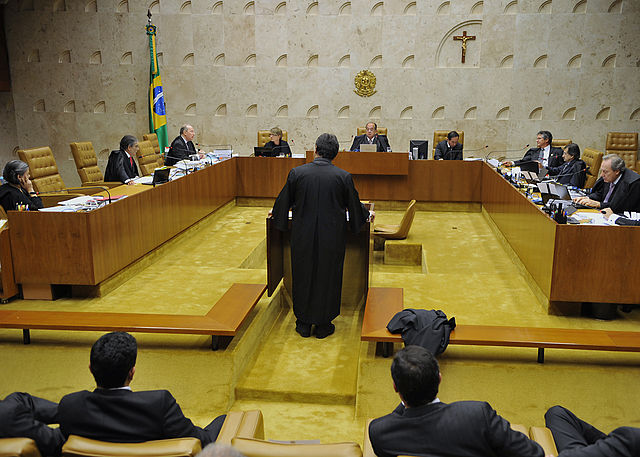 Brazil’s Supreme Court unanimously agreed on Thursday that corruption charges against a member of Congress can move forward, possibly impacting impeachment efforts toward President Dilma Rousseff [BBC profile]. Prosecutors believe [AP report] that the leader of the lower house of Congress, Eduardo Cunha, accepted USD $5 million dollars between 2006 and 2012 in connection to the Petrobras [corporate website] national scandal. The prosecutors in the Petrobras investigation allege that businesses paid a total of over USD $2 billion to obtain Petrobras contracts, which they then exploited by running up costs and delaying completion. Cunha was a key figure in beginning impeachment proceedings against Rousseff, claiming she was involved in the scandal. On a separate matter, a congressional Ethics Committee also decided to investigate [BBC report] whether Cunha lied about holding overseas back accounts. The court has not decided whether Cunha will be forced to step down from his position as the investigation continues.

More than 100 individuals and 50 politicians have been arrested in connection to the Petrobras scandal, including the chief of staff under Brazil’s former President Jose Dirceu and the former President Fernando Collor de Mellon [Britannica profile]. Another Former Brazilian president, Luiz Inacio Lula da Silva [BBC profile], was subpoenaed [JURIST report] by the prosecutor’s office in January as they investigated the possible money laundering scheme. Attempts to impeach [JURIST report] the current president, and former chairwoman of Petrobras, Dilma Rousseff were also made, but the parliamentary commission found no proof implicating her in the Petrobras scandal. In November Brazil’s highest court ordered [JURIST report] the arrest of André Esteves, the chief executive of the country’s largest investment bank, and that of Delcídio do Amaral, a powerful senator of the country’s ruling party, both accused of bribery and corruption affiliated with Petrobras.