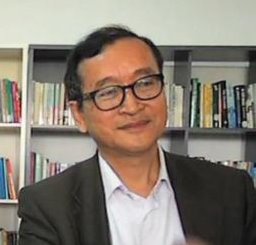 [JURIST] Cambodian opposition leader Sam Rainsy was removed as a member of the country’s National Assembly [official website] on Monday, paving the way for his arrest in connection with a defamation case following his return from South Korea. The National Assembly’s standing committee approved [press release, in Cambodian] Rainsy’s arrest concerning a “previously unenforced 2011 court decision,” which sentenced Rainsy to two years in jail over a 2008 defamation case brought by Foreign Minister Hor Namhong. After the meeting, National Assembly President Heng Samrin issued a statement [Cambodian Daily report], saying “Sam Rainsy has fully lost all rights, prerogatives and membership of the National Assembly.” Opponents of the measure claim that the defamation case was politically motivated. While Rainsy is scheduled to return from South Korea at 10 PM, there have been reports that he is delaying his return [Al Jazeera report].

Rainsy was sentenced [JURIST report] in absentia in September to 10 years in prison for charges of forging and disseminating a false map [JURIST report] of the Cambodia-Vietnam border on his political party’s website. The map, posted on the SRP website, shows an area along the border of the two countries in which Rainsy alleged the Vietnamese government tampered with four border posts, placing them further into Cambodian territory than UN, US Army, Google and French colonial maps specify. The Cambodian government has never released an official map of the country, although they promised to release one in 2012. Human Rights Watch (HRW) called [press release] the closed-door trial of Sam Rainsy and two villagers a “farce,” saying the ruling demonstrates the government’s control over the country’s judiciary. In 2006 Rainsy received a royal pardon for a 2005 defamation conviction. However, in 2011 he lost his final appeal [JURIST report].