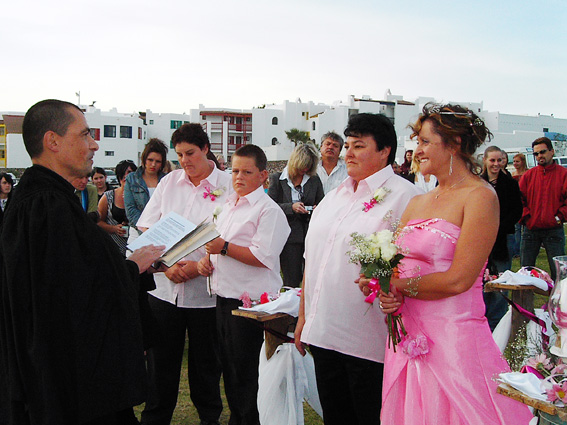 [JURIST] The North Carolina House of Representatives [official website] on Thursday passed a law that would allow some court officials to refuse to perform same-sex marriages [JURIST backgrounder] based on their religious beliefs, overriding a veto [JURIST report] by Governor Pat McCroy [official website]. The law requires that officials who hold such religious beliefs must stop performing all marriages for a period of six months. The vote of 69-41 was just over the three-fifths majority needed to override the veto. Ten members of the House were absent and did not vote. The Senate had also overridden the veto with a vote of 32-16.

Lesbian, gay, bisexual and transgender (LGBT) rights, as well as freedom of religious practice, remain controversial issues in the US. Nineteen states have enacted some variety of religious freedom laws, most modeled after the federal Religious Freedom Restoration Act [text] signed into law by Bill Clinton in 1993. In Louisiana the legislature rejected [JURIST report] a religious objections bill last month that was pushed by Governor Bobby Jindal. In April Indiana Governor Mike Pence signed into law an amended version of the controversial Religious Freedom Restoration Act (RFRA), which critics argued gave business owners the legal right to deny [JURIST report] service based on sexual orientation. Pence signed Indiana’s original controversial version into law after the state Senate approved [JURIST report] the bill by a 40-10 vote.