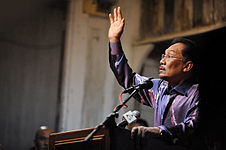 [JURIST] The Malaysian Federal Court [official website] on Tuesday upheld the sodomy conviction and five-year prison sentence of opposition leader Anwar Ibrahim [BBC profile; JURIST news archive], a decision rights groups are calling unjust and political. Anwar was accused of sodomizing an aide in the opposition campaign office in 2008 in violation of Section 377B of the Malaysian Penal Code. The Federal Court rejected Anwar’s argument that the case was a political conspiracy. The court also rejected the defense’s argument that police tampered with evidence. Following the verdict, the US Embassy in Malaysia [official website] issued a statement [press release] expressing “deep disappointment” in the Federal Court’s ruling, writing that “the decision to prosecute Mr. Anwar, and his trial, have raised serious concerns regarding the rule of law and the independence of the courts.” The International Commission of Jurists (ICJ) [advocacy website] has called on Malaysia [press release] to repeal Section 377B, which criminalizes consensual same-sex relations. “It is clear from the decision of the Federal Court today that the Government of Malaysia has once again inappropriately used Section 377B of the Penal Code against its political opponents,” said Justice Elizabeth Evatt, Commissioner of the ICJ. “This is deplorable, especially since Section 377B criminalizes consensual same-sex relations and thereby violates a range of international law and standards, including on the rights to privacy, non-discrimination and equal protection.”

Anwar has continually denied [JURIST report] the sodomy charge. The Kuala Lumpur High Court [official website] acquitted [JURIST report] Anwar in January 2012. In March 2014 an appeals court overturned the acquittal [JURIST report] and sentenced Anwar to five years in prison. The opposition leader was arrested in July 2008 after he filed a lawsuit against his accuser [JURIST reports] a month earlier. In December 2010 Anwar filed a complaint [JURIST report] in a Malaysian court over a WikiLeaks cable published by Australian newspapers stating he had engaged in sodomy. Anwar was Malaysia’s deputy prime minister under former Mahathir Mohamad until he was fired in 1998 following earlier sodomy charges of which he was initially convicted but later acquitted. He reentered Malaysian politics following the expiration of a 10-year ban [JURIST report] against him for unrelated corruption charges.