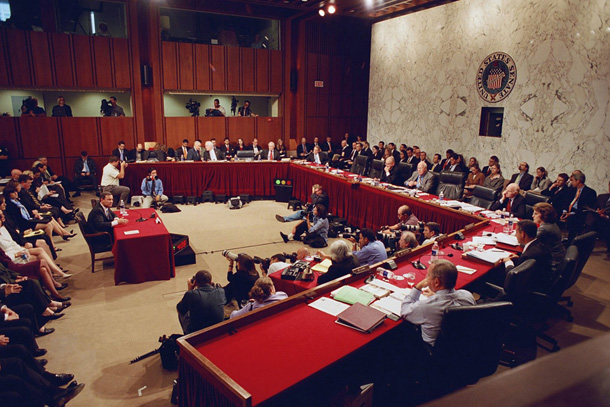 [JURIST] Nominee for the position of US Attorney General [official website], Loretta Lynch, stood before [official meeting notes] the Senate Judiciary Committee Wednesday. Lynch, a US Attorney for the Eastern District of New York, will face two days of hearings led by Republican Senator Charles Grassley [official website] of Iowa. In her opening statement [text, PDF] to the committee, Lynch declared that her “highest priorities will continue to be to ensure the safety of our citizens, to protect the most vulnerable among us from crime and abuse,and to strengthen the vital relationships between America’s brave law enforcement officers and the communities they are entrusted to serve.” Lynch is expected to face [Politico report] challenging questions from the Republican-led committee regarding immigration, the IRS and the US military. If confirmed, Lynch would be the first African-American woman to serve as attorney general.

Current US Attorney General Eric Holder [official profile] has been a controversial figure in American politics, and an accomplished head of the Department of Justice (DOJ) [official website]. Last month he announced [JURIST report] that a civil rights investigation by the DOJ into the Cleveland Division of Police official website discovered “a pattern or practice of unreasonable and unnecessary use of force.” In November President Barack Obama formally nominated [JURIST report] Loretta Lynch to serve as the next attorney general. In September Holder argued before the Thirty-Ninth Annual Convention of the Hispanic National Bar Association [official website] that migrant children who come across the border unaccompanied should have legal representation [JURIST report].