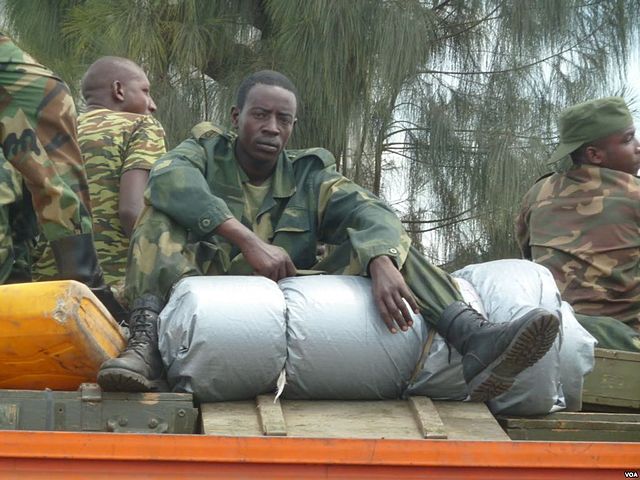 [JURIST] Human Rights Watch (HRW) [advocacy website] on Tuesday urged [press release] Congolese authorities to bring to justice those who commanded rebel troops to commit killings, rapes, mutilations and child abductions across the Democratic Republic of Congo (DRC). HRW pointed specifically to the fact that Mai Mai militia leader Ntabo Ntaberi Sheka, whose arrest warrant was issued four years ago, has yet to be arrested or convicted. Since his arrest warrant was issued in 2011, Sheka’s troops have reportedly caused the deaths of at least 70 civilians. His troops have also committed mass rapes, in addition to mutilating corpses and torturing men and women. Last year the country’s army, along with the UN’s MONUSCO [official website], initiated military operations against Sheka’s group in Walikale. However, the remoteness and lack of roads in the Walikale territory have led to difficulties. Ida Sawyer, HRW’s senior Congo researcher, has insisted that “an arrest warrant alone won’t stop a rebel leader like Sheka from committing atrocities—Congo’s authorities need to bring him to justice. The army and UN peacekeepers should increase their efforts to arrest him before more civilians suffer.”

The DRC [BBC backgrounder] has been the site of considerable human rights abuses committed by both government forces and various rebel groups. In November HRW released a report accusing police officers in the DRC of executing [JURIST report] 51 youths and causing the disappearance of 33 others.The UN issued a report [JURIST report] in October that addressed the human rights violations taking place in connection with Operation Likofi. In July the UN Special Representative for Children and Armed Conflict presented a report outlining the situation of the child in the DRC, which found the recruitment of child soldiers [JURIST report] persists. In June the head of the UN Mission in the DRC strongly condemned [JURIST report] an outbreak of deadly violence in the eastern areas of the DRC, sparked by a confrontation over cattle. In April a coalition of 146 Congolese and international human rights organizations released a joint declaration urging the DRC to create new mechanisms in its national justice system [JURIST report] for prosecuting war crimes.