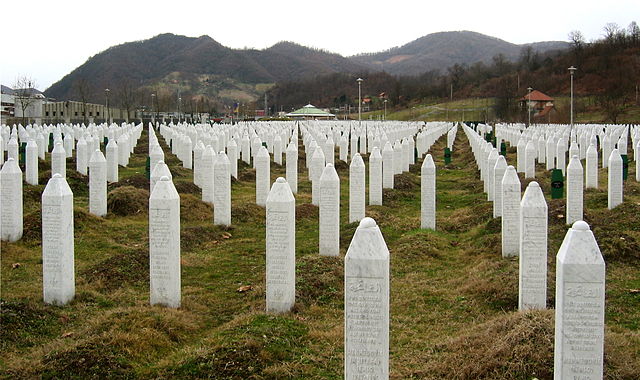 [JURIST] The Dutch government on Thursday announced plans to compensate relatives of three men killed during the 1995 Srebrenica massacre [JURIST news archive]. Each family will receive [AP report] €20,000 euros (USD $27,734) as compensation for the deaths of their relatives. The decision came seven months after the Supreme Court [official website, in Dutch] ruled [JURIST report] that the state is responsible for the deaths of the three Bosnian Muslims who were murdered shortly after being forced to leave a UN designated “safe area” controlled by the Dutch Battalion during the massacre. These three men were among 8,000 Muslim men that were murdered by the Bosnian Serb rebels. The lawyer for the families, Liesbeth Zegveld, described the amount as “shameful” and has said that the families have not made a decision about accepting the money.

Relatives of the victims filed the complaint [JURIST report] with the Dutch prosecutor’s office in July 2010 alleging that three Dutch soldiers, operating as UN peacekeepers, were complicit in the commission of war crimes and genocide during the 1995 Srebrenica massacre. The complaint argued that the soldiers knew the victims would be killed if they were handed over to Serbian troops. Relatives of the victims of the Srebrenica massacre had previously sought justice for the actions of Dutch peacekeeping forces, which they say led to the massacre. In March 2010 The Hague Appeals Court upheld the UN’s immunity from prosecution by rejecting claims [JURIST reports] brought by relatives of victims of the massacre. The relatives, known as the Mothers of Srebrenica, alleged that the Netherlands should be liable for the deaths because Dutch soldiers operating under the UN flag negligently failed to protect civilians by forcing the victims out of “safe area” and turning them over to Bosnian Serbs.