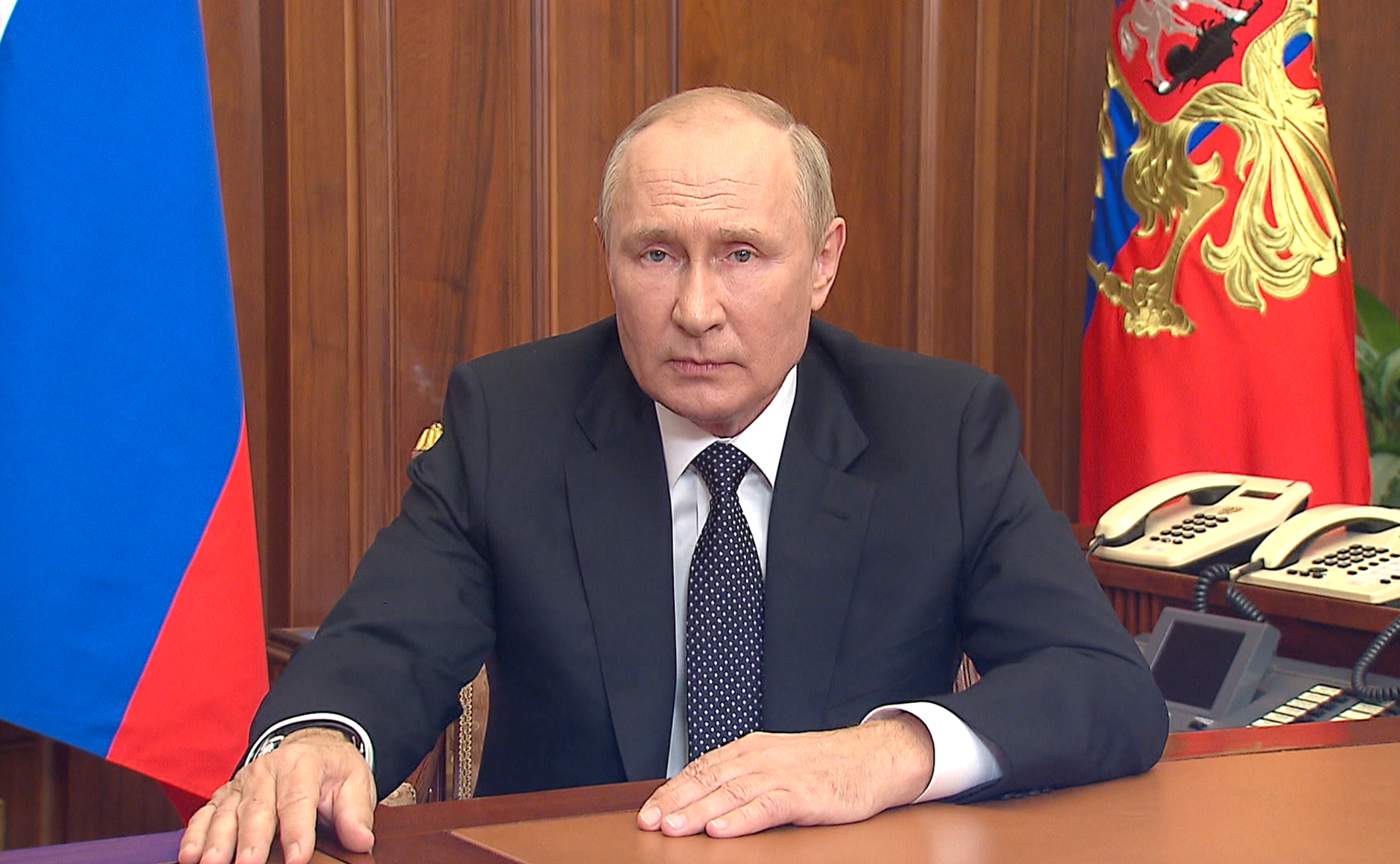 “This is not a bluff,” Russian President Vladimir Putin said of Moscow’s willingness to deploy nuclear weapons in Ukraine during a meandering speech on Wednesday, in which he also laid the groundwork for Russia’s annexation of several Ukrainian regions, and announced a partial military mobilization.

Hours after Putin’s address, US President Joe Biden referred to Russia’s invasion of Ukraine as a “brutal, needless war chosen by one man” and urged concerted action during a speech before the United Nations.

Putin’s remarks to the nation came on the heels of a series of humiliating losses for Russia seven months after it launched an unprovoked invasion of Ukraine. In it, he repeatedly referred to the authorities in Kyiv as “neo-Nazis” and accused Western powers of interfering in the hostilities to advance their own foreign policy agendas.

Framing the decision as a response not only to Ukrainian forces but to “the entire military machine of the collective West,” Putin announced a partial mobilization of Russia’s military, citing his desire to “defend our Motherland and its sovereignty and territorial integrity, and to ensure the safety of our people and people in the liberated territories.”

He emphasized that this would be a partial mobilization, not a general one, and thus that it would pertain only to military reservists, with an emphasis on specialists with military experience. The speech was accompanied by the release of an executive order providing the ostensible legal framework for the mobilization efforts.

Analysts have questioned the ultimate parameters of the order and have cautioned against jumping to conclusions about the mobilization’s likely outcomes.

“There is no doubt that ‘partial’ mobilization is a disguise – there is nothing in Putin’s order that would set limits to the draft,” Greg Yudin, a Russian political scientist who leads the Moscow School of Social and Economic Sciences’ Political Philosophy Department, wrote via Twitter. He added that Putin will continue striving to please both the “passive majority and the crazy militarist minority,” and thus will be motivated to minimize the order’s impact on the everyday lives of the Russian people.

Michael Kofman, director of Russian Studies at US national security think tank CNA, wrote in a Twitter thread on Wednesday: “I wouldn’t suggest that this can turn around Russia’s fortunes in the war. However, I would take care being overly dismissive, especially looking out towards the medium term of this winter and 2023. Force availability and manpower [matter], hence the implications can vary.” He added: “Mobilization comes with significant political risks and downsides for Moscow, but it could extend Russia’s ability to sustain this war more so than alter the outcome … Having used up its best equipment, officers, [and] personnel, I don’t see how this can be recovered.”

In a move bearing close parallels to Russia’s 2014 annexation of Crimea, Putin went on to announce anticipated referenda in several Russian-controlled territories in Ukraine.

Following the Maidan revolution, which ended with the ouster of Kyiv’s then-pro-Kremlin administration in early 2014, and brought Ukraine into closer alignment with democratic ideals, Russia rapidly facilitated a referendum in the Ukrainian peninsula of Crimea. The vote was broadly maligned as a thinly veiled attempt to assert Russian control over the peninsula, which was home to its strategically important Black Sea Fleet.

In that case as well, Putin dismissed Ukraine’s post-revolutionary authorities as “nationalists, neo-Nazis, Russophobes and anti-Semites,” and claimed their rule represented a threat to the people of Crimea. “Those who opposed the coup were immediately threatened with repression. Naturally, the first in line here was Crimea, the Russian-speaking Crimea. In view of this, the residents of Crimea and Sevastopol turned to Russia for help in defending their rights and lives,” he said at the time in a speech. “Naturally, we could not leave this plea unheeded; we could not abandon Crimea and its residents in distress. This would have been betrayal on our part.” He then claimed that given the choice to join Russia 96 percent of voters “spoke out in favor.”

Echoing this rhetoric in Wednesday’s speech, Putin said of the people of Donetsk, Luhansk, Kherson, and Zaporizhzhia: “We have no moral right to let our kin and kith be torn to pieces by butchers; we cannot but respond to their sincere striving to decide their destiny on their own.” He noted Moscow would work to create safe environments for the referenda — which in Crimea, meant a large-scale Russian military presence — and was prepared to heed the voices of each regional majority, laying the Crimea-esque framework for Russia to absorb the regions into its federal fold.

Finally, Putin made clear his willingness to deploy nuclear weapons in Ukraine — though he couched these threats in claims that Western hegemony poses an existential threat to Russia.

“Washington, London, and Brussels are openly encouraging [Kyiv] to move the hostilities to our territory. They openly say that Russia must be defeated on the battlefield by any means, and subsequently deprived of political, economic, cultural, and any other sovereignty,” he said, accusing Western leaders of having “resorted to nuclear blackmail.”

After referencing NATO’s access to nuclear weapons, he said: “I would like to remind those who make such statements regarding Russia that our country has different types of weapons as well, and some of them are more modern than the weapons NATO countries have. In the event of a threat to the territorial integrity of our country and to defend Russia and our people, we will certainly make use of all weapon systems available to us. This is not a bluff. The citizens of Russia can rest assured that the territorial integrity of our Motherland, our independence, and freedom will be defended – I repeat – by all the systems available to us. Those who are using nuclear blackmail against us should know that the wind rose [sic.] can turn around.”

Speaking before the 77th session of the United Nations General Assembly in New York later Wednesday, Biden referred to Russia’s invasion of Ukraine as a “brutal, needless war chosen by one man,” and urged unified UN action in the face of Russia’s ongoing attack.

“Just today, President Putin has made overt nuclear threats against Europe in reckless disregard for the responsibilities of a nonproliferation regime. Now Russia’s calling up more soldiers to join the fight, and the Kremlin is organizing a sham referendum to try to annex parts of Ukraine, an extremely significant violation of the UN Charter,” Biden said.

Referencing Russia’s reliance on its veto power to derail myriad UN Security Council (UNSC, Council) actions, said Washington supports reform of the body. The UNSC is one of the UN’s six primary bodies and bears responsibility for maintaining international peace and security. In theory, the UNSC carries out this duty through the issuance of resolutions aimed at countering threats to peace — with its powers extending so far as to authorize the use of force in cases where peaceful solutions have failed. A relic of the post-World War II international order, the UN Security Council includes five permanent members: China, France, Russia, the UK, and the US, and 10 rotating non-permanent members. Each of the permanent members has veto power to block any Security Council resolution, which in recent years has all rendered the Council largely ineffectual in the face of major crises.

Biden suggested that all permanent members of the Council should minimize the exercise of their veto powers, and said Washington supports UNSC reform, in particular by increasing both the permanent and non-permanent membership seats on the body, and expanding its geographical representation.

Failure to act meaningfully in the face of Russian aggression threatens the stability of the international community at large, Biden urged, saying: “If nations can pursue their imperial ambitions without consequences, we put at risk everything [the United Nations] stands for. Everything.”