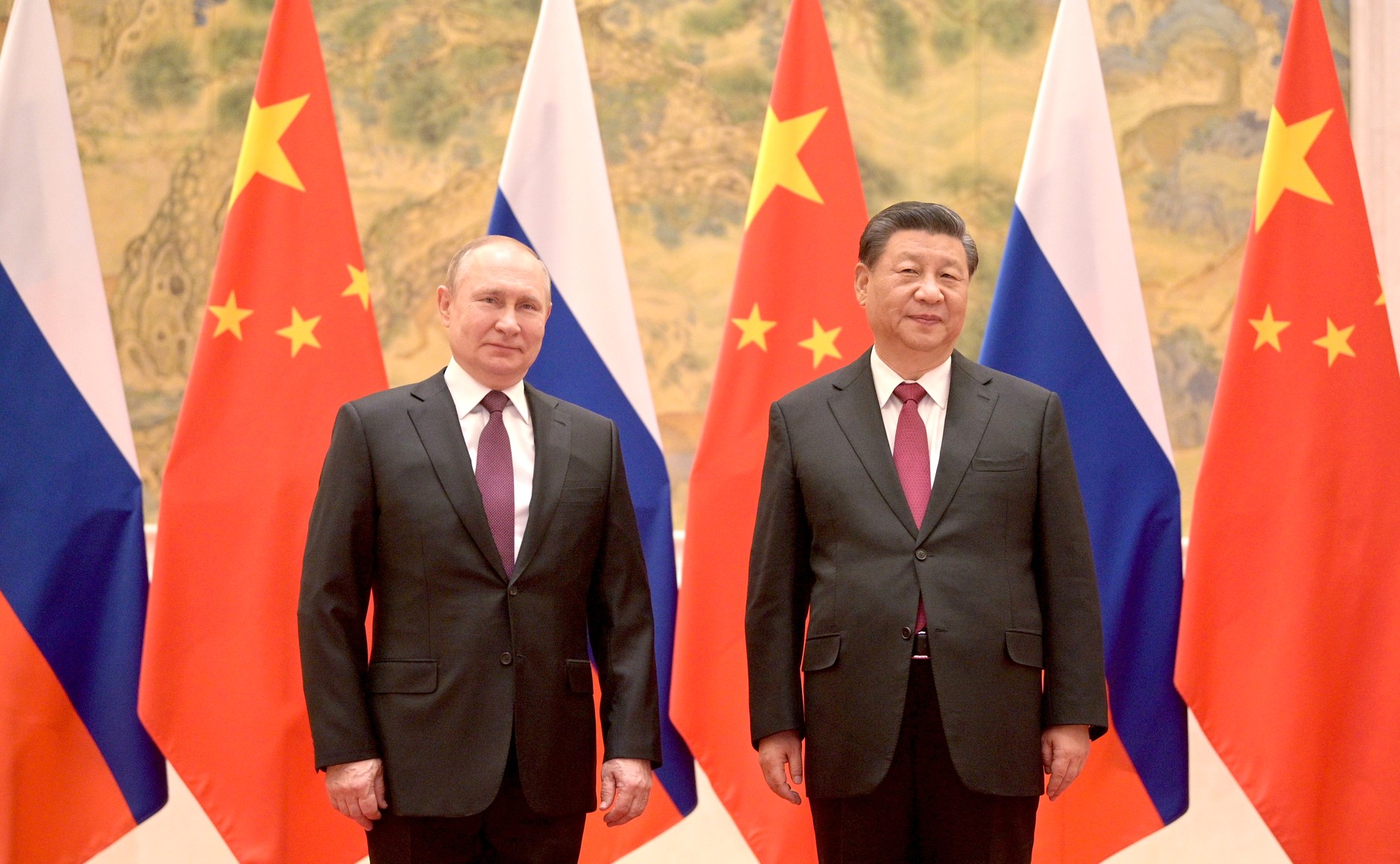 As Joe Biden prepares to warn Xi Jinping against aiding Russia, it is worth considering what the United States can offer China to entice it away as well. In the days since Russia launched its invasion of Ukraine, many analysts have grappled with the implications of a new world order defined by an ever more menacing Sino-Russian axis. But a closer look at the history of their relationship reveals a potential opportunity for giving Beijing reasons to keep Moscow at arm’s length. While Russia is desperate to destroy the current world order, China still has a stake in its survival, and the US should exploit this to change China’s trajectory.

While the world watches in horror as Russian troops encircle Kyiv and advance toward Odesa, the geopolitical structure seems to be reverting to 1950s bipolarity, with a united West trying to contain a Sino-Russian alliance. Though China has publicly proclaimed neutrality, its rhetoric thus far has made it seem far more like an accomplice, with its state media echoing Russian claims about Western provocation, “denazification,” and the lack of civilian casualties. In retrospect, the February 4 Putin-Xi statement proclaiming a friendship with “no limits” even has a whiff of the August 23, 1939 Nazi-Soviet Pact. Despite the temptation this produced for Washington to treat China as an enemy, however, the 1950s Sino-Soviet alliance, and how it broke up, offers lessons that are instructive for how to deal with the budding axis today. China and Russia have in many ways switched places from where they were in the 1950s, and that means some of the tactics used by the US in the 1960s and 1970s, known as détente, could help with China today.

At the height of the Sino-Soviet alliance in the 1950s, though both the Soviet Union and the People’s Republic of China (PRC) represented threats to the global order, the Soviet Union was more of a status quo power, while China was more revisionist. Having suffered some 27 million casualties in World War II, the Soviet Union was extremely wary of a new world war, and as a permanent veto holder in the UN Security Council, it was given a stake in preserving world order. Meanwhile, China’s seat at the UN was occupied by the Republic of China, located in Taiwan, and Beijing was excluded from the UN. The PRC’s leader, Communist Party Chairman Mao Zedong, had a much more careless attitude toward war, telling a global gathering of Communist Parties in 1957 that if nuclear war came, China might lose 300 of its 600 million people, but socialism would be victorious. In 1956, Soviet leader Nikita Khrushchev proclaimed a policy of “Peaceful Coexistence,” saying that a superpower war would be too dangerous to be contemplated and that peaceful economic competition — not war — should determine the superiority of Communism versus capitalism. This was the beginning of the end for the Sino-Soviet alliance. Mao and the Chinese saw this as a Soviet attempt to freeze the world order in place, a world order that they desperately wanted to destroy.

China’s aggressiveness created problems for the Soviets throughout the 1960s, deepening the split and pushing Moscow further from its core objectives. China encouraged Asian, African, and Latin American military adventurism against the West while the Soviets had little choice but to follow. In May 1967, though Moscow tried behind the scenes to restrain President Gamal Abdel Nasser of Egypt, China’s overt encouragement of Arab militarism, even offering at one point to send a million volunteers to fight in the Middle East, helped provoke a war that hurt Moscow’s interests. The most important case was Vietnam. While the Soviets discouraged the North Vietnamese leadership from seeking to overthrow the government of South Vietnam, China encouraged it, and while the Soviets tried to organize peace talks between Hanoi and Washington, China constantly pressured Hanoi to take a harder line. As one Soviet journalist ruefully estimated, in Hanoi, the Soviets provided 75-80 percent of the arms but only had 4-5 percent of the influence. The Soviets even complained that the Chinese made it difficult to transport arms across China to Vietnam in the hopes that the Soviets would be forced to transport them by sea, leading to direct clashes with the US Navy. Moscow became increasingly frustrated that the recklessness of their formal ally was disrupting its own plans to normalize relations with the West to concentrate resources on its domestic economy.

Today, the roles are reversed. China, while not a full status quo power, is nevertheless more concerned with its domestic economy, as evidenced by Prime Minister Li Keqiang’s recent plan presented to the National People’s Congress to increase government spending to accelerate growth to 5.5 percent. Beijing also believes that time is ultimately on its side in its quest to become the world’s dominant power. After all, most projections have China eclipsing the United States as the world’s largest economy around 2030. Russia, meanwhile, is desperate. Economic and demographic stagnation threatens to make it a geopolitical afterthought, and so Moscow is seeking to disrupt the international order by any means necessary. The danger here is that it is overly simplistic to talk about “Chinese” or “Russian” interests. As Ben Judah astutely observed, one of the reasons so many failed to foresee the Russian regime’s decision to invade Ukraine is that it is not really a regime at all anymore. Rather, Russia’s actions are increasingly the product of the whims of one man, Vladimir Putin. China’s regime has not yet been hollowed out to that degree, though Xi Jinping is attempting to take China down that road. As the situation in Ukraine shows, one-man dictatorships are even more dangerous and unpredictable than single-party regimes.

So what should the United States do? Exploit this gap between a desperate, reckless Russia and a more stable, status quo China. It should also seek to prevent China from going down the road of a personalist dictatorship. To accomplish both, the US should provide China with a greater stake in the current world order. Though US-China relations have become increasingly hostile in recent years, threatening China with sticks while providing no carrots can only harden Beijing’s resolve and affirm Xi Jinping’s dark vision of a Putin-esque anti-Western crusade. One thing China has done recently that provides an opening is apply for membership in the Comprehensive and Progressive Agreement for Trans-Pacific Partnership (CPTPP). The CPTPP is a trade agreement that evolved from the Trans-Pacific Partnership (TPP), which had initially been established between US allies in the Pacific, but from which Donald Trump withdrew in 2017. Though this seems like a strange time to accept China’s application, that is exactly what the US should offer as a carrot to China. Washington should offer to help shepherd China’s application through and help moderate the negotiation process, relying on its alliances to create a path to Chinese membership. Washington should also ultimately rejoin the CPTPP itself. This will potentially help China achieve its domestic economic goals and give ammunition to those in the Chinese leadership opposing Xi’s confrontational course. It also means, at a time when Chinese leaders are warily eyeing the economic sanctions against Russia and no doubt developing strategies aimed at making themselves less vulnerable, tying China more closely to the world economy and therefore making the threat of sanctions more daunting. As Don Corleone famously said, “keep your friends close, and your enemies closer.” It is time for the US to pull China a little closer.

Jeremy Friedman is the Marvin Bower Associate Professor of Business Administration at Harvard Business School. A historian of Russia, he has published two books on Cold War history, including most recently Ripe for Revolution: Building Socialism in the Third World (Harvard University Press, 2022).