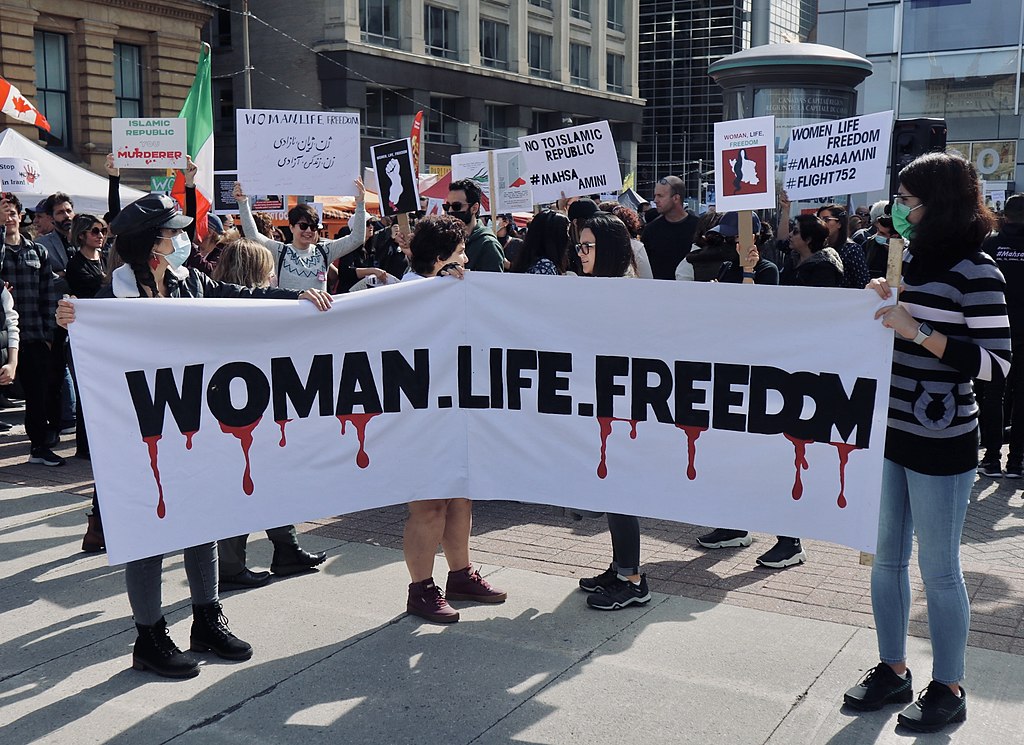 Taymaz Valley from Ottawa, Canada, CC BY 2.0 , via Wikimedia Commons
Quianna Canada, a student at the University of Arizona, argues that morality policing has no place in the modern world...

On September 16, 2022, Iran’s Basij Resistance Force, a volunteer paramilitary organization that operates under the Islamic Revolutionary Guards Corps, arrested Mahsa Amini for her refusal to comply with the country’s headscarf requirement, an alleged breach of its public morality code. Reports surfaced that the Basij severely beat Amini for resisting an officer’s insults, after which Amini was later found dead. Her death has sparked protests worldwide and raised the question of whether morality policing should be proscribed in all nations.

Before I make the case that morality policing should be outlawed, it is important to know what this article does not do. This article is not an attempt at a pathological altruistic rescue of women in Islam, as a large percentage of women worldwide choose to wear the hijab. Second, this article is not a critique of the Qu’ran, nor is it an opposition to how various Muslim sects interpret the text.

The American Psychological Association defines morality as “a system of beliefs or set of values relating to right conduct, against which behavior is judged to be acceptable or unacceptable.” In Islamic nations, ḥisba is nestled under the system of morality. The treatises of ḥisba meticulously regulate the dress code of women, the hours women spend outside of the home, and the places women visit. Ḥisba further mandates that Muslims must intervene when one is perceived to have violated Sharīaʿ law. If a woman is thought to have violated societal standards, such as the improper wearing of a hijab, she becomes a priori suspect. In her waking life, a woman is subjected to arrest. In her afterlife, she could be hung by the strands of her hair or, burned in hellfire.

The first problem with this sentiment is that Sharīaʿ law does not outline who may enforce ḥisba. This leads to arbitrary enforcement of moral codes by vigilante groups in nations outside the regulated police force. Indeed, several European nations, such as Germany, Ireland, Norway, Spain, and the United Kingdom, have all seen a rise in de facto morality policing over the last decade. In these regions, claims surfaced that Islamic men were exercising a particular kind of social control over immigrant women who defied patriarchal control and gay men who defied Muslim heteronormativity. To be sure, Grete Brochmann, a sociology professor at the University of Oslo, discovered asylum seekers and marital partners from abroad were steadily reinforcing the morality police phenomenon. As can be seen, every Muslim who is capable of doing so is obliged to exercise ḥisba, irrespective of jurisdiction.

Second, when ḥisba is regulated by law, it may be enforced against those who may not be out to harm others. If there is no harm to others in the private sphere, then it follows that nations should not interfere. As viewed by Israeli philosopher, Joseph Raz, “for there to be a harm, one must place someone worse off than they were or is entitled to be—in a way which affects their future well-being.” Most would agree that wearing a ‘liberated hijab’ does not place an individual worse off than others are entitled to be. This leads one to believe that regimes that are enforcing the morality police phenomenon are conflating law and morality. Every act of compliance with Sharīaʿ law may not be morally right, just as every act that is morally right may not be in compliance with Sharīaʿ law.

Another way of looking at morality policing is through the lens of legal moralism. From a burqa’s-eye view, it may be legitimate and permissible for morality police to intervene in an individual’s private life on moral grounds. If one violates a nation’s dress code by flaunting their physical attributes, this may lead to inappropriate behavior. In Islam, ‘inappropriate behavior’ is a greater criminal threat to society. Therefore, it is legitimate and permissible for morality police to target those who oppose moral enforcement.

Even if it is legitimate and permissible for morality police to regulate the private lives of individuals in order to preserve social morality, this is not an indication that those who enforce ḥisba will do so impartially. One should, however, not forget that the enforcement of morality only leads to psychological reactance. For example, individuals may believe the morality police are limiting their exercise of freedom. If an individual is heavily pressured into accepting a certain mode of behavior, an individual may adopt or strengthen a noncompliant view or attitude contrary to compliance. Hence, the Amini protests.

A non-compliant attitude also resulted in a civil action against Sharīaʿ enforcement in Europe. In Molla Sali v. Greece, the European Court of Human Rights (“ECtHR”) undertook an appraisal of Sharīaʿ law and found that it violated the fundamental principles of democracy. Sharīaʿ law fails the generality requirement because it does not benefit citizens in a fair and non-discriminatory way. Furthermore, most citizens in Europe do not comply with or accept the benefits of Sharīaʿ law. All of this points to the conclusion that European law is a reasonable and cooperative scheme. Indeed, Lord Anderson asserted that Sharīaʿ law is not compatible with the European Convention of Human Rights. In 2020, the ECtHR revisited the Molla Sali case and awarded damages to a woman after the state deprived her of a comparable percentage of her property under the rules of Sharīaʿ law. While Greece may have believed that its application of Sharīaʿ law was an appropriate interference, the ECtHR’s decision demonstrates Greece “ interfered wrongly and in the wrong place.”

This raises another question as to whether one is acting morally if they are coerced into abiding by specific religious norms that may not be a part of a country’s cohesion. To answer this question, and to get a balanced view on the topic, I reached out to stakeholders and activists in Ireland who sit on opposite ends of the political spectrum. Derek Blighe, an activist in the Irish city of Cork, firmly believes there should be a limit on the admission of International Protection Applicants. He is also of the audience who disagrees with the broad spectrum of people who transiently or persistently identify with a gender different from their natal sex. While I strongly disagree with Blighe’s view on the foregoing issues, he offered a vexing appraisal of the morality police phenomenon. For example, Blighe “heard there are people in direct provision following girls and telling them they are not dressed appropriately.” In Blighe’s  view, “this is another symptom of bringing in a culture that is completely opposed to your own culture.” Blighe further added, “We believe in freedom and liberty in this country. Islam is the opposite.”  While some groups, such as Ireland Against Fascism, gave no official comment, it has inferred in several of its Twitter posts that Blighe’s activism is a form of white supremacy that is dividing Irish communities and immigrants. However, Blighe responded that he is not a white supremacist. He further said, “My activism is not about a division. I am not opposed to any group. I am pro-Irish.” Where Blighe seems to delineate the boundary on immigration is when policies “encroach on [his] traditions and culture.”

Nasc, the Migrant and Refugee Rights Centre, whose goal is to realize the rights of all migrants and refugees within Irish society, did not respond. In light of the fact that anyone can enforce ḥisba, and ḥisba may be enforced against those who may not be out to harm others, morality policing should be proscribed.

Quianna Canada is a B.A. student at the University of Arizona, and an anti-racism human rights defender.

This article was prepared for publication by Viraj Aditya, JURIST Commentary Co-Managing Editor. Please direct any questions or comments to him at commentary@jurist.org