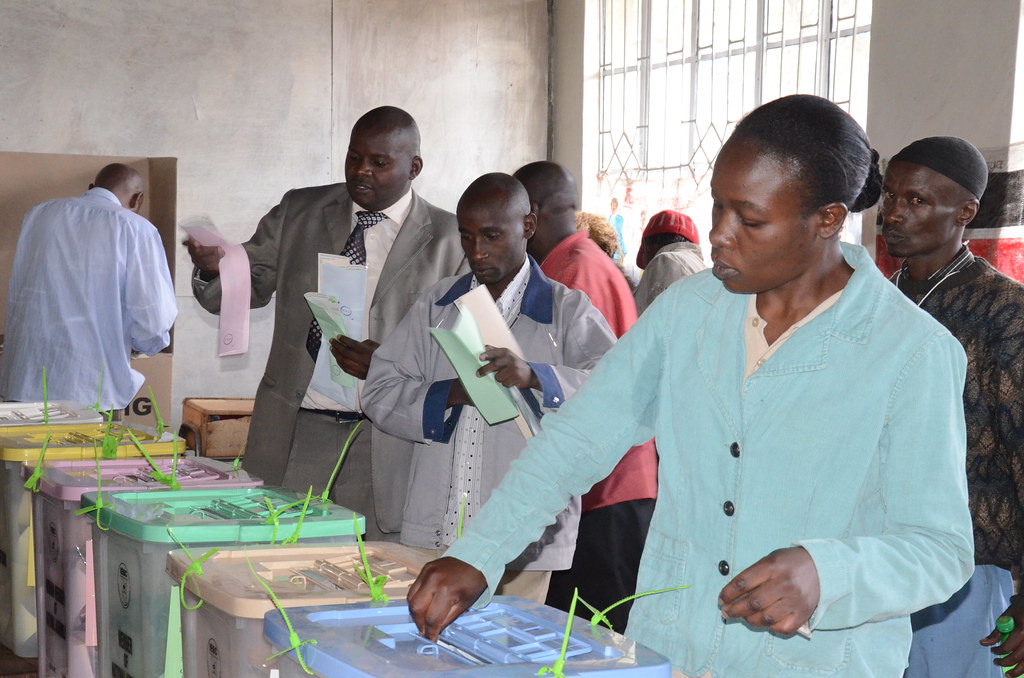 On 9 August, 2022, Kenyans turned out in large droves to elect the fifth president of the Republic of Kenya, and as in previous elections this one was marked by never-ending drama like a telenovela that just keeps on giving, bated breath as Kenyans had to wait for 6pm before the announcement of the presidential winner, and an unfortunate mixture of tragedy. Tragedy came in the form of Kimilili elected MP Didmus Barasa allegedly shooting and killing his opponent’s aide on election day, plus the murder of Embakasi East Returning Officer Daniel Mbolu Musyoka. In addition, what is becoming a constant in Kenyan elections is this: the contention of the presidential election results at the Supreme Court.

All the above is however nothing new in Kenya or in other countries around the world during election season. The challenges are perhaps often motivated by the importance that is often attached to the process of picking leaders to govern a nation.

Notably, though, one recurring theme of this year’s election was the spotlight that was shone on the adequacy of Kenya’s election laws as a result of the various events that transpired before and after Kenyans voted on the 9th of August 2022. Everything from the Independent Electoral and Boundaries Commission (IEBC) decision to ditch the use of the manual/ physical/ printed voters’ register during the August 9 General Election and to instead only use electronic voter identification, to questions that arose about the procedures that should be adopted in verifying and tallying results, to questions about the powers bestowed on the IEBC Commissioner and other fellow commissioners. All these issues played a front and center role at this year’s elections and continue to play a key role even now that the 2022 presidential election has been disputed.

An analysis of relevant election law quickly points to the fact that Kenya has a robust and well-thought-out, and might I add very advanced, set of election laws. Kenya’s electoral laws include: the Constitution Kenya, 2011; The Election Act, 2011; The Election Offences Act, 2016; the Independent Electoral and Boundaries Commission (IEBC) Act 2011; Political Parties Act, 2011; the Election Campaign Financing Act, 2013 and the Elections (General) (Amendment) Regulations, 2017 etc. Further, what may be missing or lacking in clarity when it comes to both Constitutional and Statutory law provisions, is supplemented by a rich jurisprudence of case law that has developed over the years. In fact, allow me to make the argument that the challenges faced with Kenyan elections is not as a result of lack of relevant law, but with enforcement. Hence, the buck ends with the Judiciary. Basically, the decisions made around Kenyan elections are at the discretion of the courts and how they choose to interpret and enforce relevant law.

It is worth noting that the move towards electronic voting is a worldwide trend in the search to improve efficiency and effectiveness of the electoral process. A good number of countries in Africa have already turned to electronic voting or including a digital component in the voting process, such as the biometric voter recognition kits and electronic results transmission system. However, going full-on digital has in the past proven troublesome in Kenya, as seen in the last previous elections. In 2013, the computer system set up to verify voters and remit results to the national tally centre in Nairobi failed, forcing the IEBC to revert to a manual count. The opposition claimed sabotage in the collapse of the digital system. Then in 2017 although things progressed well digitally, the opposition claimed computer servers were hacked, resulting in the manipulation of results in the presidential race. The matter was taken to court and the Supreme Court invalidated the presidential election highlighting “irregularities and illegalities in the transmission of results”. As a result, Kenyans had to go back to the polls and to vote again.

So, one can argue that the mistrust of electronic voting technology is justified. Nevertheless, the High Court reversed the decision of the IEBC to do away with the use of the manual voters’ register during the 9 August 2022 General Election. This put a spotlight on what the Kenyan electoral Law had to say about the electoral process methodology. The matter went to the High Court and Justice Thande Mugure held that the move by IEBC was unconstitutional and ordered the IEBC to use the physical register to identify the voters in situations where the electoral kits have failed and there is no other alternative. In his ruling Justice Mugure said if the decision is allowed to remain unchallenged the result would be that voters’ constitutional right to vote under Article 38(b) would be violated. Hence, the high court was able to protect the constitutional right of vote under Article 38 of the Constitution by allowing for the use of manual registration.

The second legal issue that put a spotlight on the law occurred after Kenyans had cast their vote on the 9th of August, and had to wait a whopping six days before the president elect was announced. The results were slated to be announced on the 15 August 2022 at 3 pm at Bomas of Kenya at the vote-tallying center. Nonetheless, mayhem erupted and before the Chairman of the Independent Electoral and Boundaries Commission(IEBC) could announce the winner at the Bomas of Kenya, four commissioners out of seven (Juliana Cherera, Francis Wanderi, Irene Masit and Justus Nyang’ay) held a separate press conference at the Serena Hotel, and stated that they could not claim ownership of the results as issued by the Chairman of IEBC, Wafula Chebukati, because of the opaque nature of the results and promised to provide more information the following day. A short while later, the IEBC chairman announced that Deputy President William Ruto had won with 51.2% and against former Prime Minister Odinga at 48.1% of 12.5 million votes. Notably, according to Nation Media Group’s website, the ballots came from 253 of the nation’s 291 constituencies.

The following day on the 16 of August 2022, the four IEBC commissioners, led by the vice-chair Juliana Cherera, at Serena Hotel issued a second statement offering a comprehensive recap of their stance on the 2022 presidential election. The four claimed the electoral commission’s chair, Wafula Chebukati, overruled them and insisted on announcing the results despite concerns they raised. They claimed that it was not clear how the chairman came to his percentages. They also said that the final tally of the presidential election results was not brought before the commission for processing as is required by the law. Listing four reasons behind their decision to reject the results declared, the commissioners said that the aggregation of the results were not mathematically correct and that the results did not include totals of registered voters, votes cast or rejected votes as is required by law. In a statement dated Friday, August 19, the four, further claimed that IEBC chairman, Wafula Chebukati, went ahead to unilaterally declare the results without any plenary verification whatsoever by all the commissioners and/or their participation as mandated by the Constitution and electoral laws.

The statement made by the four commissioners raise a number of legal issues revolving around the election process and they include: whether the right legal procedure (tallying, verification, publication etc.) was followed when processing the results before the final announcement was made, and whether the IEBC Commissioner had the authority to announce the results even though majority of the commissioners did not agree with his conclusion, and further, what the powers of the IEBC Commissioner include. As it stands, Kenya’s electoral law and relevant case law can answer all the above questions. For example, to begin with, when it comes to processing (tallying, verification, publication etc) of electoral results by IEBC, the laws are very clear on the requirements. These can be found in Regulation 83 of the Elections (General) Regulations 2012 (as amended by Legal Notice No. 762 of 2017) published on 21st April 2017, which discusses the procedure to be followed during tallying as well as the requirements that need to be fulfilled in order to announce any general election results.

Hence, once the petition is filed, the Supreme Court of Kenya upon hearing evidence from both sides will determine whether the IEBC commissioner followed the law or not and this will all depend on what is pleaded. Further, if one is looking to determine whether the commissioner of IEBC had the authority to announce the result despite dissenting opinions but the majority, 4 out of 7, one looks at the Second Schedule, paragraph 7 of the Independent Electoral and Boundaries Commission Act 2011. It provides: “[u]nless a unanimous decision is reached, a decision on any matter before the Commission shall be by a majority of the members present and voting”, and it suggests that the dissent by the four commissions, the majority of the Commissioners on grounds on the grounds that ‘opaqueness’ of the presidential results meant that Chebukati did not have the legal authority to make the declaration of the presidential winner. This is further emphasized in the case of IEBC -v- Maina Kiai & 5 others, Civil Appeal No. 105 of 2017, where the court determined that the mandate at the national tallying center is not left to the Chairperson of IEBC alone, but all the other six members of the IEBC Commission in accordance to Article138(3)(c) of the Constitution. The court went on to further state that before Chebukati makes any declaration, his role is to accurately tally all the results exactly as received from the 290 returning officers country-wide, without adding, subtracting, multiplying, or dividing any number contained in the two forms from the constituency tallying center. If any verification or confirmation is anticipated, it has to relate only to confirmation and verification that the candidate to be declared elected president has met the threshold set under Article 138(4), by receiving more than half of all the votes cast in that election; and at least twenty- five percent of the votes cast in each of more than half of the counties.” Additionally, where necessary section 80(4) of the Election Act no 24 of 2011 provides that the election court, in this case the Supreme Court, has the authority to tally votes and after, order the IEBC to issue a certificate of election to a President, a member of Parliament or a member of a county assembly where there is a recount of the ballots cast, and the winner is apparent.

Raila Odinga and his team will be making their petition by 2pm today, 22nd August 2022, and only then will it be clear what prayers they will be seeking from the Supreme Court. It is, however, key to note that the outcome of an election petition will depend on the evidence adduced, and the court’s interpretation and enforcement of relevant laws. Hence, once again, the buck stops with the Judiciary to enforce the law accordingly. The problem is not a lack of adequate and relevant laws!

Dr. Annie Awour is a Law Lecturer at the Jomo Kenyatta University of Agriculture and Technology

This article was prepared for publication by Ingrid Burke Friedman, Features & Commentary Editor. Please direct any questions or comments to [she/her] at commentary@jurist.org