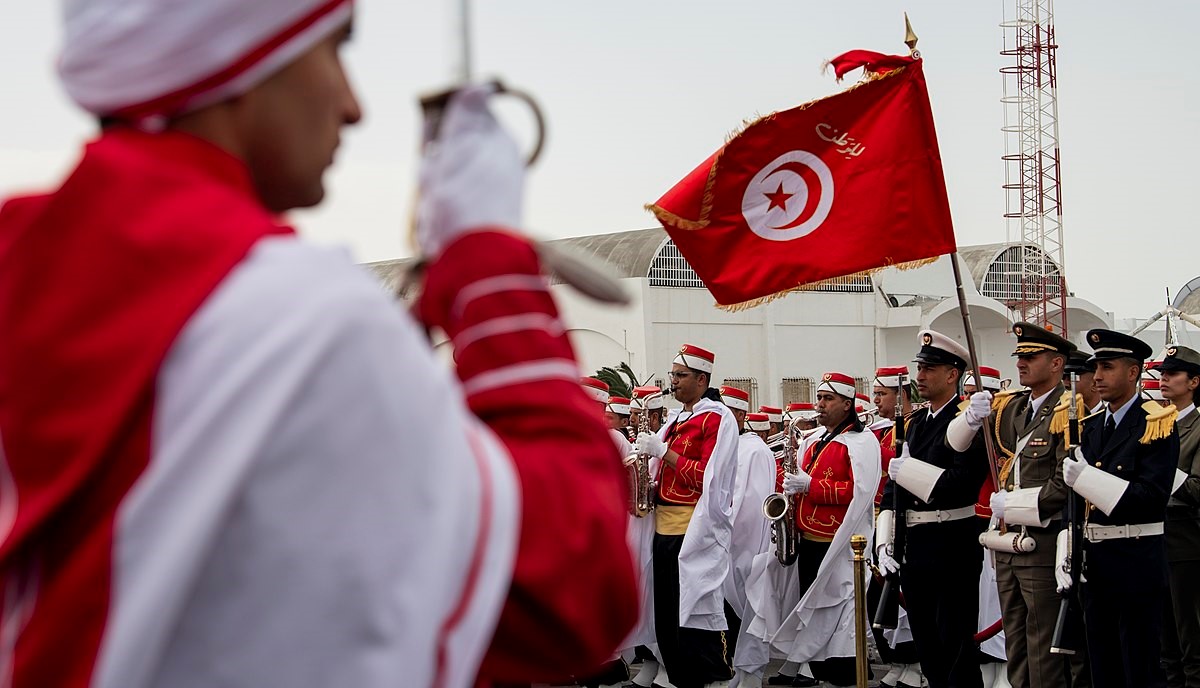 USAFRICOM/Wikimedia
Saranya Ravindran, a law student at the National Academy of Legal Studies and Research in India discusses the new draft Tunisian constitution…

On December 17, 2010, a vegetable vendor in Tunisia set himself ablaze in open defiance of police harassment, igniting the spark for a wave of democratic revolutions that spread like wildfire across the Arab world. In the decade since the revolutions swept the region, Tunisia has stood out as a success story, being the only democracy which has survived. Twelve years since, the new draft Constitution proposed by Kais Saied on June 1, 2022, makes it clear that Tunisia is making a return to a one-man, autocratic rule.

After a two-year drafting process of consultation and consensus-building between the Islamist Ennahda and its rival secular parties, Tunisia adopted a constitution in 2014. This document was widely celebrated for protecting human rights and enshrining democratic checks. However, the celebrations were short-lived before President Kais Saied dissolved the Parliament, set aside the 2014 Constitution, and began to rule by decree, in what many (rightly) call a coup in 2021.

On June 1, rather than passively setting aside the Constitution, Saied delivered a new Constitution that would grant him even more power. This article will explain the shortcomings of the procedure followed and substantive clauses of the Constitution. It also presents a comparative analysis of Turkey’s Constitution during its 1980 coup when General Kenan Evren seized power and continued decades of autocratic rule. This is important to gauge the direction that Tunisia is headed, given the close resemblance of its present situation with that of Turkey’s historically unstable government.

Tunisia has experienced procedural opaqueness in replacing a constitution its people fought long and hard to win. Key players in the country’s political process were not involved in framing the Constitution. The Islamist Ennahda and Free Constitutional parties, prominent university deans, and powerful unions like the UGTT refused to participate in the process, decrying it as being rigged in Saied’s favor. Civil rights groups like the Tunisian League of Human Rights who were prominent members of the 2014 process were also absent.

Moreover, throughout the year 2022, when the Constitution was being drafted, Tunisia was under a “State of Exception” without other branches of government to be a check on presidential power, such as independent Courts, election commissions, parliamentary supervision, etc. Hence, even the normal procedural safeguards that would be important to pass any bill, let alone draft a new Constitution, were absent.

To show a veneer of transparency, Saied called for a “national dialogue” through an online consultation in January 2022. However, barely 7.5 percent of registered voters participated, a number that would immediately trigger a new election in any reasonable democracy. The Constitution was made public on June 30th and there was barely a 25-day period of public review before it was put to a referendum. During this short period, there were no public debates or reviews from independent bodies and journalists before adoption.

Moreover, given Tunisia’s position at 94 in the Reporters Without Borders’ Press Freedom Index, the arbitrary detention of opposition party leaders, arrests of journalists and arbitrary firing of 57 judges on corruption charges, it is not surprising that these actors also remain removed from the drafting procedures. Ultimately, much like the Constitution itself, the process has largely been a one-man show.

While the draft will be subject to a referendum, the outcome of the referendum has already been decided in Article 139 of the draft, which states that the Constitution will enter into force following the declaration of the result by the Election Commission. Even the possibility of rejection has not been acknowledged by the Parliament, despite calls of boycotts that have been raised by opposition parties and massive protests in Tunis.

The procedures are an uncomfortable throwback to the conditions in Turkey post the 1980s coup. The National Security Council, consisting of Kenan Evren’s aides, chose to draft the Constitution by itself without any inclusive democratic procedure. Moreover, just as with Tunisia, it was put to a referendum that was restricted by multiple factors—a lack of free press and debates on the provisions of the Constitution, and a clear indication that a harsh military rule would only continue if not become worse if the Constitution did not pass. The results were evident even before the first ballot was cast.

The draft constitution, in simple terms, creates a transition from a parliamentary system to a presidential system but, in the process, places unchecked and expansive power in the hands of the President. The draft does not have a separate and equally powerful executive, judiciary and legislature but has these branches performing some “functions” with the President controlling them.

Article 68 proposes that the draft laws introduced by the President would take precedence over ones proposed by other MPs. He would also have the exclusive power to propose treaties and financial proposals like budgets. Article 109 goes one step further by saying that the President cannot be held accountable for anything he does in pursuance of his duties. In stark contrast, the Government under Article 112 is accountable to the President. Article 61 mandates that MPs can be withdrawn under the law by the President. He can also dissolve the Parliament and dismiss the cabinet members without checks.

Article 69 also states that laws submitted by Parliament can be rejected on the grounds of “upsetting the financial balances of the state”, providing no threshold for when the financial balance is “upset.” A new parliamentary group called the “Council of Regions” has also been proposed, without any details on its power or how it will be elected.

Article 140 allows Saied to hold power by decree until elections are conducted in December. Moreover, after serving two tenures, the President can extend his tenure beyond the term limit if there is an unnamed, undefined “imminent danger to the state”.

In other words, the President can extend his undemocratic rule for longer without any accountability to the public or the Parliament, and simultaneously have the power to either dismiss democratically elected MPs under vague conditions, or single-handedly pass bills that he deems fit.

While claiming to have separate powers and balancing mechanisms, it reduces the judiciary to another functionary, stripped of its independence and power to hold the President accountable. While the 2014 Constitution gave the Judiciary the power to ensure the Prosecutor’s office and the composition of the High Judicial Council is independent, such mechanisms are glaringly absent in the new draft. In contrast, it gives the power to the President to directly appoint judges and bans opposition in the form of strikes by judges (which have recently gained more traction in Tunisia). Unlike the 2014 draft, there are no procedures to review the President’s actions or impeach and remove him even when he seriously violates the Constitution.

Unlike the 2014 Constitution, the President also has the unbridled power to head the armed forces and the internal security forces. The 2014 Constitution proposed elaborate rules governing how the members of the election commission are to be appointed. However, Article 134 of the new Draft proposes an impartial, 9-member commission while being completely silent on how or who would be appointing them.

Again, what this implies is not just that the judiciaries and election commissions are reduced to toothless bodies, it also means that they are directly controlled by the President making it even harder in the long term to rely on them to act as a check.

Again, none of this is dissimilar to Turkey’s Constitution. While Turkey’s 1961 Constitution tried to have a careful balance of power, the 1980 structure heavily restricted how much power elected or constitutional bodies had in favor of increasing powers to the coup-based government. Much like in Tunisia, the President was given the power to appoint justices to the Constitutional Court.

The National Security Council, composed of members of the military coup, had the power to set the agenda of government cabinets. It also had control over who could be a part of politics (much like the power exercised by the Tunisian President over MPs and the government), and the NSC-led organs could arbitrarily suspend political rights.

Ultimately the Constitution placed immense powers in the hand of an unaccountable presidency. It took over a decade before Turkey could return to democracy and even longer before the democracy stabilized. If the history of Turkey says anything, it will be a long walk before Tunisia can move past the shadow of constitutional degradation.

Saranya Ravindran is a law student at The National Academy of Legal Studies and Research in India.

This article was prepared for publication by Rebekah Yeager-Malkin, Deputy Managing Commentary Editor. Please direct any questions or comments to she/her/her at commentary@jurist.org