Commentary
herbalhemp / Pixabay
Douglas A. Berman and Jana Hrdinová, Executive Director and Administrative Director, respectively, of the Drug Enforcement and Policy Center at The Ohio State University Moritz College of Law, discuss their Center's recent report on cannabis law courses and curriculum at law schools throughout the US...

California’s 1996 ballot initiative protecting medical marijuana users from state criminal prosecution kicked off the modern marijuana reform era in the United States. In part due to federal prohibition, state medical marijuana laws prompted an array of interesting and intricate legal questions. Some issues concerned the reach of federal law after state reforms. Could doctors be punished by federal authorities for recommending marijuana to patients consistent with state law? Could groups providing marijuana to patients raise a medical necessity defense if subject to federal prosecution? Other issues arose at the intersection of novel drug laws and other state laws. Could an employer lawfully fire an employee with a valid medical recommendation simply for testing positive for marijuana? Could police officers lawfully search a car based simply on the smell of marijuana?

Lawyers and courts have been grappling with these and countless other legal questions across the nation as an ever-growing number of states have legalized marijuana for various uses. Many constitutional questions about potential conflicts between federal and state authority and individual rights have occupied federal courts all the way up the US Supreme Court. A wide array of state law issues have not just occupied state courts, but state administrative bodies and legal ethics panels as well, all seeking to sort out just when and how lawyers can advise or even play a role in the developing marijuana industry.

A full quarter century after California’s first state-level reform, three dozen states have now joined California in legalizing marijuana for a range of medical uses, representing over 70 percent of the US population. And 18 states plus the District of Columbia, representing over 40 percent of the US population, have also legalized cannabis for recreational use. A large, new cannabis industry has come with a number of complex regulatory and policy issues. State policymakers and public lawyers now confront the challenge of developing licensing schemes and regulatory rules to protect public health and safety, designing effective tax rates and business structures, and advancing equitable goals ranging from expunging old convictions to helping disadvantaged communities participate in the industry. Private lawyers helping marijuana businesses must figure out how to raise capital, navigate licensing requirements, and structure acquisitions in the face of diverse state laws and persistent federal prohibition. Lawyers are also called to review and revise workplace rules about marijuana use, to advise landlords, hospitals, and other venues concerning marijuana use on their properties, and to address myriad other novel issues in this dynamic field.

And yet, with so many new legal questions to grapple with and such rich policy areas to debate, remarkably few law schools are cultivating a modern curriculum by offering courses on cannabis law and policy for the next generation of lawyers. Beginning in 2018, our center (the Drug Enforcement and Policy Center at The Ohio State University Moritz College of Law) has conducted an annual survey of law school curriculum to trace the evolution of teaching in the area of cannabis law and policy. We have surveyed law schools’ online course schedules and contacted registrar offices by email. We were surprised initially that barely one in ten law schools offered even a single class in this arena; during the academic year 2018-2019, only 21 out of 201 accredited law schools offered 24 cannabis-specific courses to their students. This number grew to 29 schools offering 33 courses in 2019-2020, and growth continued with 35 schools offering 35 courses in 2020-2021 and finally 37 schools offering 38 courses in our most recent accounting in 2021-2022. But even though the number of offered courses has grown over the last four years, law schools still lag significantly behind the fast-moving pace of cannabis legalization. While now close to 75 percent of US states have some form of legalized marijuana, less than 20 percent of law schools in the US offer instruction on cannabis law. 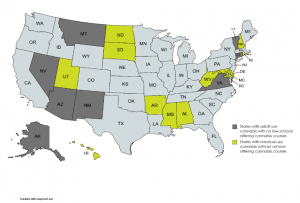 With a focus on its educational value, the area of cannabis law can serve as a terrific capstone course for upper-level students that provides a bridge between law school teachings and practice of law by presenting practical and understandable application for complex legal questions.  But there can be great professional value for students as well.  The Fall 2021 issue of The National Jurist put “Cannabis Law” on its list of “The 20 Hottest Law Jobs for the Next Decade,” no doubt because the number of law firms and other legal employers looking for young legal talent with a knowledge base in this field is sure to grow as an ever-growing number of states legalize and develop recreational and medicinal cannabis regimes. Given the relative novelty of this industry, its complicated regulatory environment, and continuing growth, students who are familiar with cannabis laws may have special career opportunities and chances for rapid advancement in a dynamic and interesting field. Notably, the legal press has highlighted that an increasing number of large law firms are starting to build significant cannabis practice groups. It will be worth watching if a growing number of major law firms developing cannabis practices will in turn lead to a growing number of law schools adding classes in this area.

Douglas A. Berman is the Newton D. Baker-Baker & Hostetler Chair in Law and the Executive Director of the Drug Enforcement and Policy Center at The Ohio State University Moritz College of Law.

Jana Hrdinová is the Administrative Director of the Drug Enforcement and Policy Center at The Ohio State University Moritz College of Law.

This article was prepared for publication by Katherine Gemmingen, JURIST Co-Deputy Executive Editor. Please direct any questions or comments to her at commentary@jurist.org