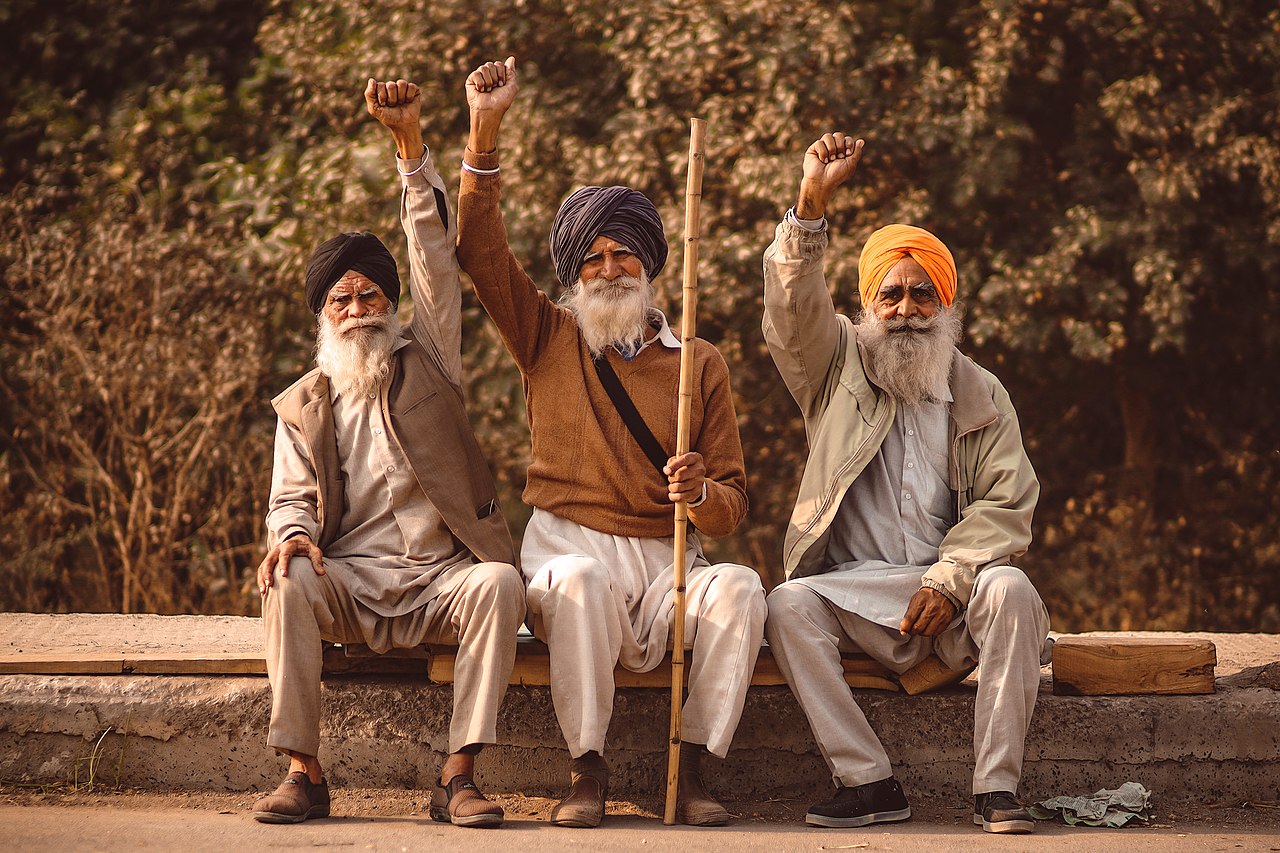 Wikimedia Commons: Ravan Khosa/ Aristeas
Priyanshi Bhageria, a student at Dr. Ram Manohar Lohiya National Law University, India, analyses judicial precedents and constitutional history to comment on whether the Right to Protest can be taken away in India if the subject matter is sub-judice...

Recently, the central government of India agreed to repeal the three farm laws which had led to one of the longest nationwide farmers’ protests. The decision to repeal the farm laws had come when the laws were already facing a challenge in the Hon’ble Supreme Court of India. Kisan Mahapanchayat had filed a writ petition before the Rajasthan High Court challenging the three farm laws. The Kisan Mahapanchayat had sought permission to hold a protest at Delhi’s Jantar Mantar against the three laws. However, in October 2021, a two-judge bench led by Justice AM Khanwilkar of the Hon’ble Supreme Court had asked the petitioners to file an affidavit declaring that they will not be a part of the protests which are blocking highways at Delhi’s borders.

The Hon’ble Court asked why the farmers were protesting when the legislations were “not in force at all.” It added, “No one other than the court can decide the validity of the farm laws. When that is so, and when farmers are in court challenging the laws, why protest on the street? Either choose the court or the road.”

The Hon’ble Court has framed this question as a central issue despite Kisan Mahapanchayat declaring in an affidavit that they will not protest till the matter is sub-judice. This shows that the ‘examination’ on this issue by the Apex Court would be purely academic, and not relevant to decide the present case.

This article presents an analysis on the question, whether right to protest will exist even when the matter is sub-judice. It talks about the right to protest as guaranteed under Article 19 of the Indian Constitution, discusses various case laws of the Apex Court in this regard, highlights the intention of the constitution drafters and finally deduces a conclusion.

Right to Protest Under the Indian Constitution

In the Indian Constitution, the right to protest is not explicitly mentioned. Rather, the same is implied from various provisions. Article 19(1)(a), which provides for freedom of speech and expression, when read with Article 19(1)(b) and Article 19(1)(c), which provide for freedom to assemble peacefully without arms and freedom to form associations and unions co-operative societies respectively, implies that the people indeed have a right to protest. However, this right is not absolute and is subject to the restrictions mentioned in Article 19(2) and Article 19(3).

However, a certain section asserts that it is possible to restrict right to protest when the matter is sub-judice either under ‘public order’ or ‘contempt of court.’ However, this argument is questionable. The Indian Constitution only provides for peaceful protests and the same can be deduced from various provision such as Article 51A that casts a duty upon every Indian citizen to safeguard public property, preserve environment and composite culture. Moreover, relevant sections of the Indian Penal Code, 1860 (IPC) and the Code of Criminal Procedure, 1973 (CrPC) confer wide powers upon police officers and district magistrates to ensure that public assemblies and protests are peaceful and do not turn violent and disturb public order. Hence, sub-judice cannot be inferred as a reasonable restriction which flows from ‘public order.’

We cannot interpret ‘sub-judice matters’ as a facet of contempt of court either, as this would imply that once a law is challenged, the petitioners lose their right to protest. In simpler words, this would mean that right to protest and right to constitutional remedies are mutually exclusive of each other. Such an understanding goes against the principle of harmonious construction of fundamental rights established by the Hon’ble Supreme Court in its judgements such as CIT v. Hindustan Bulk Carriers.

Moreover, if right to protest is to be curbed when a certain legislation against whom the people are agitating is facing a constitutional challenge in the competent courts, it would lead to clamping down the voices of dissent. The ruling party, which has managed to enforce the legislation in question, can very easily evade the agitations by subjecting the law to judicial scrutiny. The litigation for such legislations might take several years with the aggrieved section of the society left with no respite. Hence, right to protest, as implied from the Indian Constitution, will in part, be exhausted.

When Matter is Sub-Judice: What We Know Till Now

There have been instances where the Apex court has discussed about restrictions that can be imposed on the fundamental rights. In the recent case by the Hon’ble Court, Anuradha Bhasin v. Union of India, it held that “the fundamental rights are prescribed as a negative list so that no person could be denied such right until the Constitution itself prescribes such limitations.” Thus, if ‘sub-judice matters’ were to function as a reasonable restriction, it must find itself in the text of Constitution.

In Amit Sahni v. Commissioner of Police, the Hon’ble Court examined the validity of Citizenship (Amendment) Act 2019. With regards to right to protest, it held, “…the law has been enacted by Parliament and is facing a constitutional challenge before the Court that by itself will not take away the right to protest of the persons who feel aggrieved by the legislation.”

In J.R. Parashar, Advocate and Ors. v. Prashant Bhushan, the Hon’ble Supreme Court had held that right to protest itself will not be held in contempt of court. However, when the protests cause a hindrance in the access to the courts, only then the right to protest can be restricted.

The above cases show how the Apex Court has safeguarded the right to protest when the matter is sub-judice. However, at one instance, i.e., in Re: Prashant Bhushan, the Court took a contradictory stand. It held that when a matter is sub-judice and people associated with the case give out statements, it impacts the judges hearing the case thus leading to impartiality and interference with judicial process.

The reasoning employed by the Hon’ble Court in this judgement seems questionable because judges, while deciding a matter, are voluntarily exposed to a plethora of literature which at most times have a stronger influence on the judge than statements released by one of the parties. These go on to become the reasoning behind the verdict and are cited in the judgement. Moreover, inability or incompetency on the judge’s parts (to not get influenced by one of the parties in dispute) should not be used as an excuse to curb fundamental right of the people.

Constitutituent Assembly Debates: What did the Framers Intend?

The Constituent Assembly did not hesitate in asserting the importance of Article 19 of the Indian Constitution. Kazi Syed Karimuddin, stated “…there is no denying to the fact that this article is the very life of the Draft Constitution.”

At one instance, T.T. Krishnamachari, Indian politician, had moved an amendment to include “contempt of court” covering ‘sub-judice matters’ in the category of reasonable restrictions under sub-clause (2) to the Article.

The conclusion of the deliberations in this regard was that right to protest cannot be curbed merely because a legislation is being examined by a court. The reasoning behind this conclusion was that legislations are the sole prerogative of the legislature and the executive, and not the judiciary.

From the above analysis, the deduction seems to lean in favour of not imposing ‘sub-judice matters’ as a reasonable restriction to curb the right to protest. Right to protest is one of the most powerful expressions guaranteed to the people of India. If the same is taken away, merely on the ground that the object of agitation is facing a judicial scrutiny, it would not only be unfair and unjust but also will lead the country to the path of despotic rule wherein the slightest act of dissent will be looked down upon and actively discouraged. Judicial scrutiny, in such a case, can be ill-motivated to curb protests.

Right to protest is a right which is very easy to disparage because of the alleged loss it can cause. Unnecessary restrictions imposed on a fundamental right which is mostly seen as ‘unfavourable’ by the government authorities, can effectively curb its exercise. A democratic society which takes away this right or creates unreasonable hindrances on its exercise ends up suffocating its people leading to a despotic regime.

Hence, the risks associated with granting unfettered fundamental rights is sure understandable, however, a mere pending judicial scrutiny cannot be a good enough reason to take away a constitutionally guaranteed fundamental right to protest.