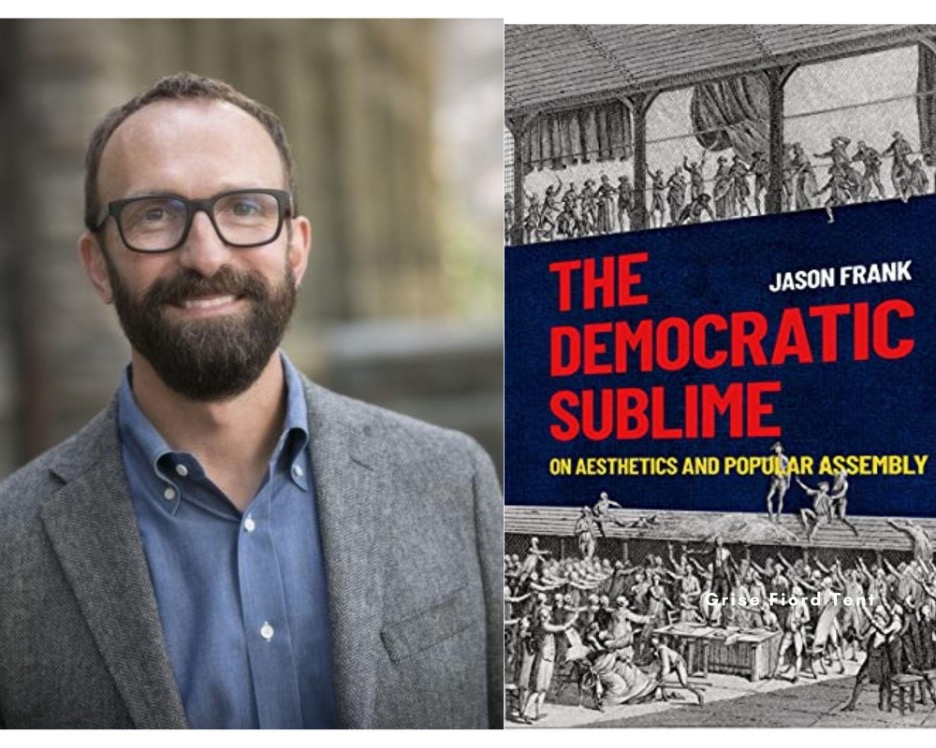 Dr. Jason Frank is the John L. Senior Professor of Government at Cornell University, and his primary field is political theory. Dr. Frank’s research and teaching interests include democratic theory, American political thought, modern political theory, politics and literature, and political aesthetics. He specializes in historically-situated approaches to democratic theory, with a focus on the modern history of popular sovereignty. He has published five books, most recently The Democratic Sublime: On Aesthetics and Popular Assembly (Oxford University Press, 2021), which offers an interdisciplinary exploration of how the revolutionary proliferation of popular assemblies—crowds, demonstrations, gatherings of the “people out of doors”—came to be a central form of democratic representation during the age of democratic revolutions, and how they remain so today.

Dr. Jason Frank, the John L. Senior Professor of Government at Cornell University, has written a new book, The Democratic Sublime: On Aesthetics and Popular Assembly (Oxford University Press, 2021), that explores the concept of democracy on the road and how we think about citizen demonstrations in the streets, popular assemblies, and other aspects of public expression. The concept of “the people” is central to democratic thinking and theory, and Dr. Frank’s research looks at how these concepts and ideas have changed over time since the Age of Revolution.

In this interview with JURIST, Dr. Frank elaborated and answered pressing questions about modern democracy, drawing instances from historical narratives.

Dr. Frank emphasizes the Age of Revolution, the increasing importance of iconography and how visual culture possessed a certain romanticism. This period possessed a visual aesthetic that transcends human instrumentality, human reason and our idea to represent; it exceeds the realm of reason and use by humans, which naturally is in words. Democracy is the affirmation of human autonomy, to collectively control their political fate without accepting forced power.

The sublime, according to Dr. Frank, is a democratic people itself. One can think of the power of the monarchs (kings and queens), which was questioned in the Age of Revolution. The monarchy is present in a ritualistic manner; the monarchs were humans manifesting a state, but the people never represented themselves. This representation of democracy through people is the “sublime” in a democracy.

Morality and ethics can be seen as forms of aesthetic impulses and discoveries. They advocate for an ethics that recognizes the inherent violence in human thought and expression. They recognize that the majority of perspectives and understandings reflect a reduction of the universe to the shape of our fears and aspirations. They consider alternatives to the all-too-common human reaction to the world’s apathy to our predicament.

Dr. Frank emphasizes the importance of aesthetic concerns, as this is how democratic people conceive and experience themselves as an entity named “people,” as a governmental system, and as the state’s authority. The Democratic Sublime: On Aesthetics and Popular Assembly is a multidisciplinary investigation of the transition toward democratic politics in the Age of Revolution, incorporating analysis of works by Alexis de Tocqueville, Jean Jacques Rousseau, and Edmund Burke, as well as visual depiction, works of art and artistic renderings of the people as a political body, and poetic and fictional works.

If democracies are to successfully confront the difficulties of globalized politics, they must engage in this form of aesthetic reflection. Engaging with the type of inquiry that an aesthetic approach raises can benefit media commentary, scholarly research, and policy formation.

It’s past time we recognized rationalism for what it is: an uneasy response to undercurrents of fear and horror. Without returning to the small and limited chamber of conscious cognition, we must re-engage with these undercurrents. The regularity of spectacular occurrences gives us lots of chances to rise to the occasion.

Vishwajeet Deshmukh is a fourth-year law student at Government Law College, Mumbai, India, and a Multimedia Editor for JURIST.