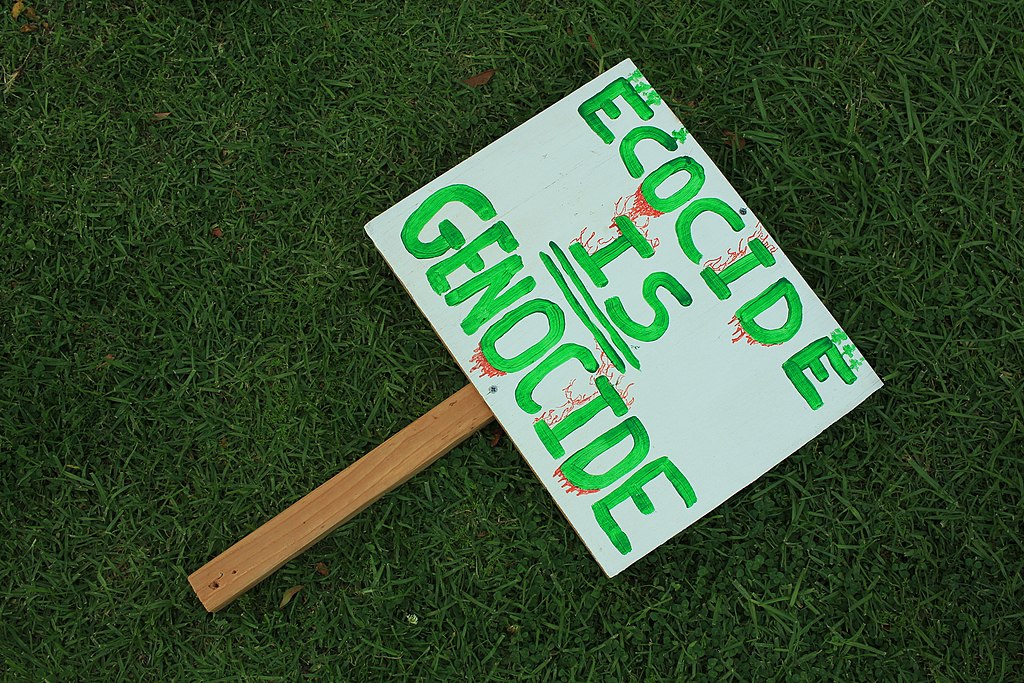 ~filth~filler~, CC BY 2.0 , via Wikimedia Commons
Sarthak Gupta, a law student at Institute of Law, Nirma University, India, addresses the recently proposed definition of "ecocide" by the Independent Expert Panel and presents arguments as to how the proposed definition lacks the necessary rationale...

The Independent Expert Panel (IEP), formulated for articulating the definition of the term “ecocide”, proposed a definition to construct a cornerstone international crime of ecocide that demonstrates a significant belief in international criminal law’s regulatory prospects. However, the proposed definition lacks the necessary rationale, and the architects of the draft hardly offer legal practitioners any assistance with the complicated situations arising from their draft interpretation.

Before a definition of the term “ecocide” was proposed in the draft, a debate followed whether it is achievable to adopt a definition for the term “ecocide” that establishes liability for extensive environmental damage while also emphasizing the significance of international law in addressing environmental prejudice and municipal environmental injustice? “Ecocide”, as a term, is a comparatively contemporary notion. Its roots can be dated to scientists’ use of the terminology during the Vietnam War to characterize and condemn the environmental havoc and impending human health devastation exacerbated by the US military’s toxic herbicidal warfare, Agent Orange.

Professor Arthur W. Galston, coined the term to characterize willful destruction of the environment. Galston also proposed an international agreement advocating a ban on ecocide. In the initial drafts of the Code of Crimes Against the Peace and Security of Mankind, which later became the Rome Statute, “ecocide” was taken into consideration by the UN International Law Commission as an additional international crime, along with the existing international crimes (viz. war crimes, genocide, crime of aggression, and crimes against humanity). However, it was dropped out.

The notion of “ecocide” was also addressed at the 1972 U.N. Conference on Human Environment by Olof Palme, the then Swedish Prime Minister. However, the term “ecocide” did not receive any legal acknowledgement. In 2010, in a proposal to the UN Law Commission for international law of ecocide, Polly Higgins proposed an amendment to the Rome Statute which would describe “ecocide” as, “the extensive damage to, destruction of or loss of ecosystem(s) of a given territory, whether by human agency or by other causes, to such an extent that peaceful enjoyment by the inhabitants of that territory has been severely diminished.” However, Polly’s definition was criticized and faced with comparable challenges in terms of adherence to the principles of legality (nullum crimen sine lege) and sovereignty.

Subsequently, in November 2020, the Stop Ecocide Foundation proclaimed that they had assembled an Independent Expert Panel of professionals and legal practitioners to draft a definition of the term “ecocide”. After much deliberation, the panel, in its draft, proposed the definition as “Article 8 ter” of the Rome Statute of the International Criminal Court (ICC) which could function as a cornerstone for the formation of a new international crime as follows, “[u]nlawful or wanton acts committed with knowledge that there is a substantial likelihood of severe and either widespread or long-term damage to the environment being caused by those acts.”

Antithetical to the former four international crimes, ecocide, as per its definition, would be the sole crime that would not necessitate human damages to be prosecuted. A handful of substantial concerns are raised in the proposed definition of the ecocide crime. Most evidently, the term “ecocide”, as articulated here, has little in accordance with the notion of “genocide” that prompted it. The urge to eliminate the world of particular groups is at the foundation of genocide, as demonstrated by the protected group and explicit intention prerequisites. The definition of ecocide is indeed not “group-like,” and, more significantly, the mens rea of ecocide is substantially significantly smaller than that of specific intent.

To define ecocide on the foundation of the definition of “genocide” is not a pragmatic approach. Arguably, because confining the crime to the devastation of “specific groups of animals or plants” would be neither ethical nor practicable. Therefore, the proposed crime is not some kind of genocide; it is rather more equivalent to a crime against humanity, both in essence and composition. However, it is vital to note that the draft is silent on the characterization of ecocide as a fifth international crime and not as the twelfth crime against humanity. The International Law Commission had initially addressed significant environmental crimes in a much more matter-of-fact approach, which led environmental advocates to address the concept of ecocide (as done by Polly Higgins). On a broader philosophical dimension, this symbolizes the transition from an anthropocentric to a bio or ecocentric paradigm, which seems to have encouraged the IEP. Nevertheless, the proposal’s self-confession on the ecocentric approach is diminished by the fact that it enables a cost-benefit analysis in the incidence of legitimate environmental damage.

Furthermore, another contention in the draft is the prerequisite of mens rea. The draft definition states “unlawful or wanton acts committed with knowledge.” Mens rea is defined in Black Law’s Dictionary as “guilty state of mind required for a crime in conjunction with a prohibited act and in general, constitutes knowledge that the perpetrator’s actions will have a considerable possibility of causing specific outcomes.” However, Article 30(3) of the Rome Statute defines “knowledge” distinctively as “awareness that a circumstance exists or a consequence will occur in the ordinary course of events.” ICC’s judges have perceived Article 30(3) to necessitate the perpetrator to be conscious that his or her actions are “substantially certain” to culminate in the forbidden consequence(s), which is a considerably higher threshold of subjective awareness than “substantial likelihood,” which is similar to recklessness.

Surprisingly, the Panel concedes that their definition of “knowledge” is not exactly how it is defined under Article 30(3). The Panel ascertained that Article 30 default mens rea, for such consequences, was too restrictive and would not encapsulate behaviors with a slightly elevated likelihood of inducing catastrophic or either pervasive or long-term environmental deterioration, considering the high thresholds for the consequences within the definition of ecocide. As a reason, the Panel considers a mens rea of recklessness, or dolus eventualis, which requires knowledge of a substantial risk of serious, pervasive, or long-term damage.

The mischaracterization was not sufficient enough for the incorporation of the highly questionable term “wanton acts committed with knowledge” in the proposed definition. The draft defines “wanton” as “reckless disregard for damage which would be clearly excessive in relation to the social and economic benefits anticipated.” The term “wanton” is intended to introduce another mens rea requisite—recklessness—into ecocide, in the framework of outrageous damage as it is not essential for a perpetrator to “know” that his or her conduct will result in “substantial or either pervasive or long-term environmental damage.” Consequently, the proposal replicates the architecture of crimes against humanity, as described by Article 7 of the ICC Statute, with the (standard) definition of the crime occurring first, accompanied by the definition of certain (but not all) components following in second.

Article 8(2)(b)(iv) of the Rome Statute states that “intentionally launching an attack in the knowledge that such attack will cause incidental loss of life or injury to civilians or damage to civilian objects or widespread, long-term and severe damage to the natural environment which would be clearly excessive in relation to the concrete and direct overall military advantage anticipated” is punishable. The proposed crime in the draft is not limited only to military attacks but encompasses any lawful or wanton conduct. Furthermore, the environmental damage is to be pre-determined partly cumulatively and partly alternatively. As per the proposed crime, the perpetrator must comprehend that the harm will be “absolutely excessive in comparison to the envisaged social and economic benefits.” It will be challenging enough just to demonstrate that the perpetrator was fully cognizant of his or her actions having a considerable likelihood of experiencing the requisite environmental damage.

Therefore, proving that the anticipated environmental damage would have been evidently unreasonable in anticipation of future social and economic benefits will be virtually impossible. The prerequisite apparently justifies the perpetrator to create the moral judgment in question (this conduct will not be sufficiently beneficial), similar to Article 8(2)(b)(iv) of the Rome Statute.

Nevertheless, besides the proposed “ecocide” crime’s procedural inadequacies, it is debatable if a distinct, stand-alone fundamental crime is necessary to appropriately protect and preserve the environment. However, given the magnitude of the potential danger presented by environmental deterioration and its irreversible character, the prospect of prosecuting environmental crimes utilizing existing crimes enumerated in the Rome Statute should not be disregarded at this juncture. Perhaps more appropriate, specifically from a pragmatic perspective, would be to further establish in law those components of pre-existing international core crimes and include an environmental component upon which the novel approach of ecocide reflects in particular.