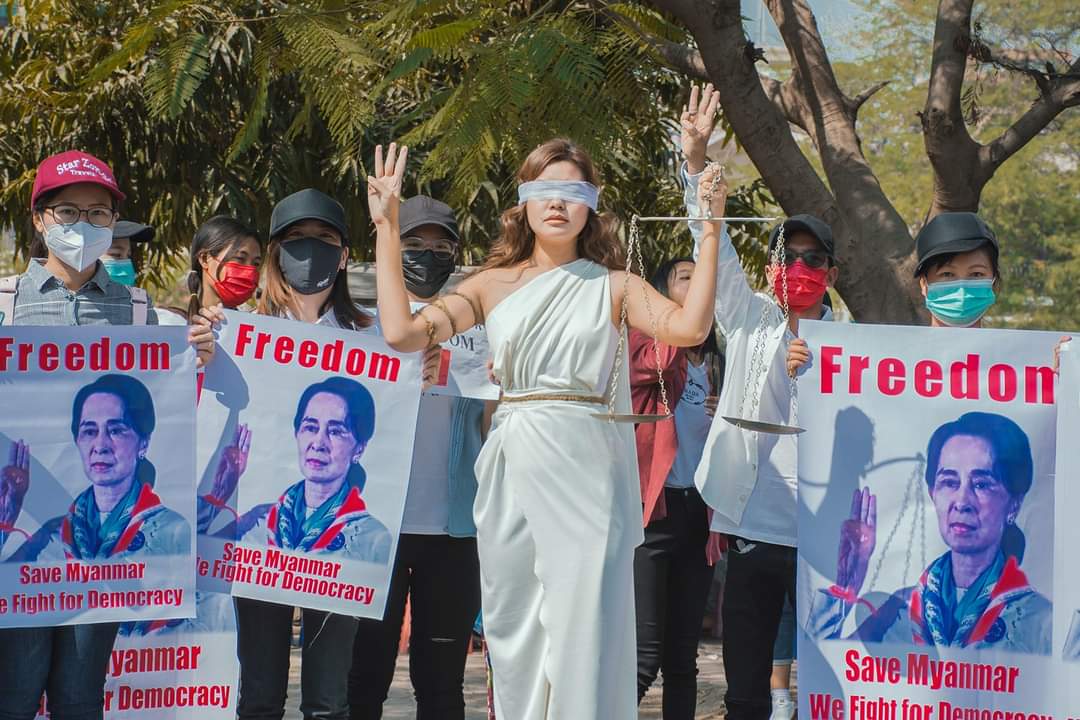 (c) WikiMedia (Whopeehere)
Melissa Crouch, a Professor at the University of New South Wales Faculty of Law in Sydney, Australia, analyses the legality and constitutionality of the recent military coup in Myanmar...

Constitutions don’t always matter much in a coup. But the 2008 Constitution matters to Myanmar’s coup of 1 February. The military has created a constitutional fiction about the coup in a thin attempt to claim legality for its actions.

The first point of debate was whether the military had the right to demand copies of electoral data.

In late November 2020, the Tatmadaw True News Information Team demanded that the Union Election Commission (“UEC”) hand over a range of documentation, from voter lists to vote and lists of advance votes and receipts. They claimed that section 74 of the Evidence Act gave them the right to this information as public documents.

On early December, the UEC issued a statement clarifying that the Evidence Act only applies to formal complaints that are the subject of investigation by the UEC. It also clarified that neither the laws nor regulations on the Hluttaw specify that there is a right to access to the kinds of documents requested.

The military also raised concerns that the Commissioners may be bias because they were appointed by the President (an NLD member). This criticism points to a flaw in the system designed by the military – namely the perception of bias in the appointment of electoral commissioners. The commissioners are by design appointed by the incoming government and serve for the term of the government (Constitution, s398a). However, the perception of bias is not necessarily the same thing as proof of bias.

There are several problems with the military’s claims. Arguably, many of these documents (like the actual votes) are not public documents. While ideally voter lists should be public documents, there is no central voter registry but rather 46,000 separate polling station voter lists, based on data extracted from the population registry at the township level (for more on the issue of voter fraud see here).

The second problem is the assumption that the military is a body that is entitled to request such documents. The military has no specific responsibility regarding elections.

The UEC therefore, acted legally and was under no obligation to release documents to the military.

The second legal debate was whether the President can refuse to convene a special joint session of the legislature (the Pyidaungsu Hluttaw).

The military claims that the refusal to convene a special session is the basis for its declaration of emergency (under section 417). This is insufficient reason to constitute an emergency and, in any case, the decision to decline to hold a special session was constitutional.

On 11 January 2021, the military called on the Speaker to convene a special session of the Pyidaungsu Hluttaw, the joint legislative body (according to s 82 of the Constitution). Its petition was supported by 203 members of parliament, so they did meet the requirement of support from one-fourth of members (section 84).

Requests to hold a special session need to be in the public interest (section 81c).

The President is not required to instruct the Speaker to hold a special session if the one-fourth requirement is met.

The petition was declined because disputes concerning the elections are the responsibility of the Election Commission, not the legislature.

The President and Speaker acted constitutionally by refusing to hold a special session of parliament on the elections.

Therefore, the claims of the military that a state of emergency is justified are false.

I turn now to the reasons why the acts of 1 February are properly understood as a coup rather than as a constitutional state of emergency.

The President is the only person empowered to declare a state of emergency under section 417 of the Constitution, in coordination with the National Defence and Security Council (NDSC).

The President can voluntarily resign, but he did not do so. The Constitution lists a range of other reasons that the President’s position may become vacant, such as due to incapacity or death (section 73a). This suggests reasons are required for the president to validly vacant office.

The military arrested the president and claims that the Vice-President became the acting President.

There is no evidence that the President willingly left office. The provisions on the Presidency falling vacant also presume that there is still a civilian elected government in office (ss 73b-f). There is no longer a civilian government, so the basic requirements of the replacement of a president are not met.

One reason for the military calling for a special session was perhaps to initiate impeachment proceedings against the president for his role in failing to ask the speaker to call a special session to deal with the allegations of electoral fraud. Nevertheless, the military would not have been able to get the two-thirds support required to impeach the President.

To return to the constitutionality of the exercise of section 417, it was also not possible for all members of the NDSC to hold a meeting on 1 February. The members of the NDSC include civilian office holders like the President, minister of foreign affairs and speakers of the two houses of parliament (section 201).

It appears that the military has reconstituted the NDSC with only its military members left, using unconstitutional means to declare a constitutional emergency.

In effect, the Commander in Chief has jumped to section 419 of the Constitution, the provision that gives him the right to exercise all powers in an emergency, without going through the right processes to get there.

This means that even if the emergency lasts for up to one year, the elected members of parliament could in fact take office for another four years after that. This is perhaps the best chance to allow the military to exit from power according to its own Constitution.

Melissa Crouch is a Professor at the University of New South Wales Faculty of Law in Sydney, Australia.

This article was prepared for publication by Khushali Mahajan, a JURIST staff editor. Please direct any questions or comments to her at commentary@jurist.org.