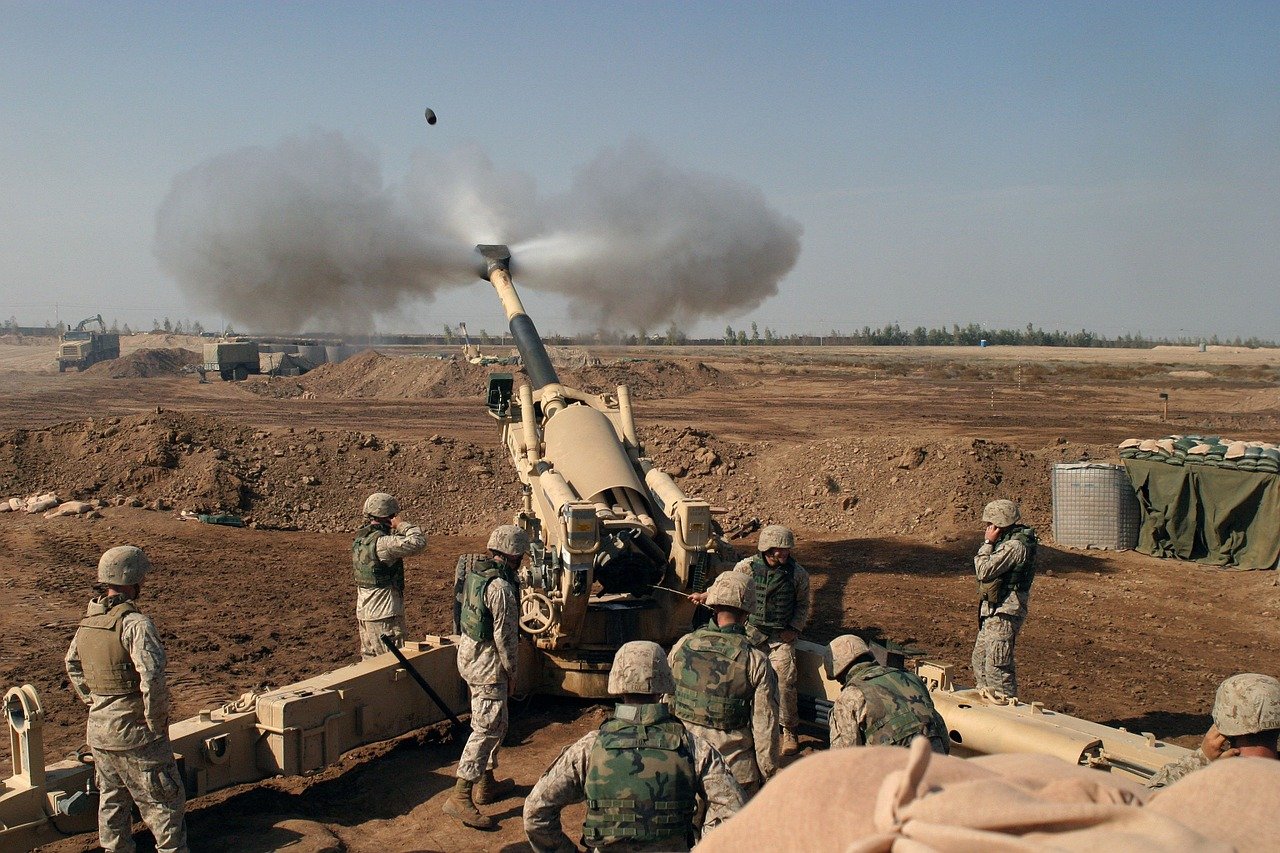 “Cheaper than water.” This is how Iraqis commented on the value of their lives after they learned that US President Donald Trump had pardoned the four Blackwater security contractors who had previously been sentenced over the death of 17 Iraqi civilians in the 2007 Nisur Square massacre. Sentences included life imprisonment for a first-degree murder.

A child was also among the innocent Iraqi victims. “He broke my life again,” said the child’s father upon learning of Trump’s pardoning decision.

America, the Middle East, and the rest of the world expressed outrage over Trump’s actions in his last days in office. But it is important to remember that there is nothing Trump-specific about security contractors’ impunity – rather, it is a Republican Presidents’ and Administrations’ hallmark. And in the background is also a complex legal web of rules created to both enhance and constrain security contractors’ legal accountability.

While it is true that Trump’s Education Secretary, Betsy DeVos, is the sister of Blackwater’s founder Erik Prince, the pardon issue is much larger than one personal political connection. It is also not just about the Iraq war, in general, as some have submitted. It rather goes back to the legal fundament and the Bush Administration’s understanding of the specific framework that security contractors were supposed to operate it.

It was clear that security contractors in conflict and post-conflict zones were no angels compared to military personnel under the same circumstances. Rather, the obvious asymmetry was revealing legal deficiencies and lapses in the way that contractors were treated by the justice system. This was not an unintentional gap, rather it was an omission.

We were all told at the time that this legal debate was too complex in order to move forward. Security contractors could not be tried under the UCMJ, the industry counsels argued repeatedly, as it would be unconstitutional to bring civilians – which security contractors indeed are – to be tried under court martial. It would have taken at least 10-15 years to test the constitutionality of such cases until a definitive pronouncement was reached by the US Supreme Court. There was also an international opposition to trying civilians under court martial; it was not just about Supreme Court determination. So it was better not to do it at all, as some legal experts would argue, given the potential legal minefield inherent in applying UCMJ to contractors.

To make UCMJ applicable, it had to be accounted that security contractors did not fall under the military chain of command; they also did not have rules of engagement, but rules for use of force. UCMJ sets different standards for burden of proof, command influence, and nature of the evidence that would be suitable to soldiers but not to contractors. Alongside that, there were many other differences in operation, such as a different culture and applicable mechanisms. Security contractors did not have peer pressure and soldier justice mechanisms to keep each other in line the way the military did. Generals at the time were worried that applying the UCMJ to contractors meant an additional monitoring burden on the military in the field. Translated into simple language, just so that you can really get the mood at the time, that meant that the US military did not want to have to babysit a bunch of boys, excited they got to carry guns, running around unbridled, unconstrained by the usual rules and discipline in the military, and despite that being in the way of military operations. The US military had more important things to do at the time. It was not uncommon for US Generals to actually lock groups of security contractors in buildings, as soon as in-theater operations began. This is how they were signaling that they really did not want contractors in their way. Having to police and discipline them under UCMJ was the last thing that the military wanted to deal with in conflict zones, on top of everything else.

So all these inapplicability arguments would have been acceptable if the other regime for trying security contractors as civilians under MEJA actually worked, which it didn’t back in 2007, and that was by design. We often heard that extraterritorial jurisdiction cases, especially in conflict zones, were very difficult to bring forward due to the fact that there was no evidence and witnesses left in such cases, and it was hard to move everything to the US for prosecution by regular DOJ prosecutors and federal judges, rather than military prosecutors and judges as it would be under UCMJ. But the Nisur Square massacre convictions during Obama’s time showed that it was possible.

The military extraterritorial jurisdiction section within DOJ at the time was underfunded. And by that, I mean that there was literally one person for these types of cases. There was no separate bureau for MEJA prosecutions at DOJ at the time. DOJ simply did not have the resources for such cases. That was by design, and it leads to one obvious conclusion.

Behind the whole legal complexity and practical challenges, lurked the simple truth that these prosecutions would have been happening if there was political will. As usual, the problem was political will within DOJ, and even further, within the Bush Administration generally.

“The Bush Administration and the Department of Justice are not serious about Iraq cases prosecutions,” Congressman David Price told me (page 6) back in 2007. Washington knew this little secret and was very much focused on fixing it with proposed legislation, even before the Nisur Square massacre took place later that year. But congressional oversight, legislation, and the courts could only go as far. There was no real substitute for the lack of political will and even obstruction on the part of the executive at the time. Prosecutions were the missing link.

Security contractors were Bush’s lapdogs who ran around like mad in Iraq and Afghanistan, unconstrained by the regular chain of command and honor code that the rest of the US military forces generally have to abide by. Security contractors were out of control and out of the law’s reach by design – not because the legal issues were so insurmountably complex and unfathomable. It could be done, as actual security contractors’ convictions during the Obama age would demonstrate.

When the Blackwater contractors were finally convicted seven years later in 2014, that was a sign of relief, but you needed political will for that. These convictions happened under the Obama Administration. Back in 2007, Obama was the leading Senator proposing draft legislation to regulate the security industry. That was his issue. I helped his office review and introduce amendments to the draft bills at the time in 2007 so that the laws could be more precise in a field that was often full of hidden legal traps in a net crafted by the Bush Administration and Republicans, intended to shield security contractors from justice by design. If it was up to Bush and power hadn’t transferred, the Trump-pardoned Blackwater convictions would not have even taken place at all, in the first place.

Convictions of the Blackwater Nisour Square massacre type are so difficult to finalize (it took seven years) that overturning and pardoning something like that is a slap not only in the face of Iraqi victims’ honor and memory, but also the rest of us who have worked to bring more legal justice and transparency to the security contractor industry.

So, Trump is simply another Republican Administration President who wants that type of guys to just get away with it. These four pardons are scandalous but there is nothing specifically or strikingly Trumpian about them. This is just business as usual for the Republicans. That of course, does not mean that America should not be outraged, which America indeed is. And rightly so.

Iveta Cherneva was one of the very few go-to people for legal jurisdiction applying to security contractors in 2007 in Washington DC. She assisted Senator Obama’s office in review and amendments to Obama’s draft bill to regulate the security industry in 2007. Iveta Cherneva is an Amazon-bestselling author, political commentator, and human rights activist. She is the co-author of Regulating the Global Security Industry (2009) and author of Trump, European security, and Turkey (2020). Her career includes Congress, the UN, and a Washington-based association for an ethical code of conduct in the private security industry. Iveta Cherneva’s opinions appear in Euronews, the New York Times, The Guardian, Salon, Modern Diplomacy, the Fletcher Forum of World Affairs, LSE, EurActiv, and others. She appears on TV and radio for Euronews, DW, Voice of America, and others. Iveta Cherneva was a top finalist for UN Special Rapporteur on freedom of speech in 2020.