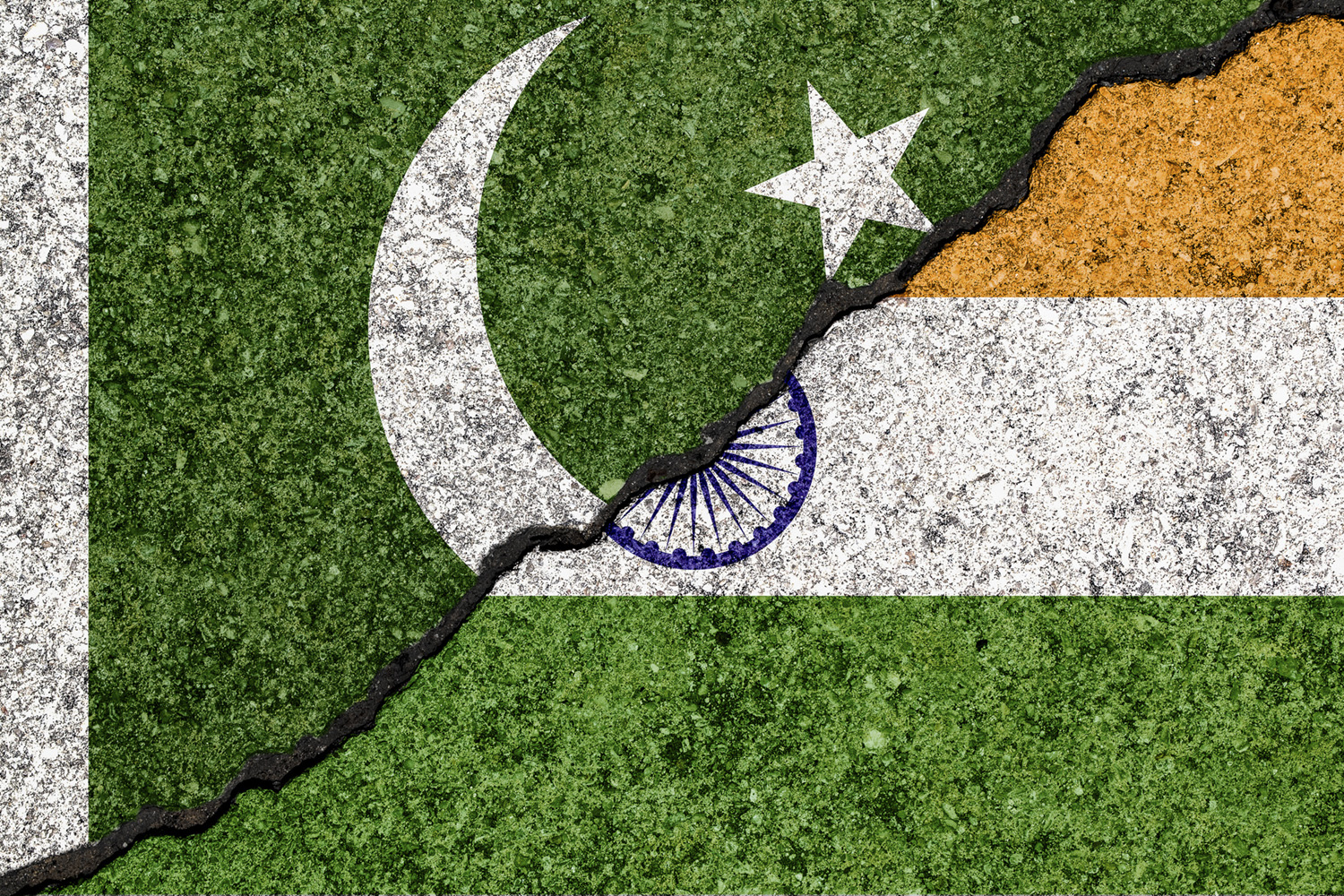 “I tell you that I still consider myself to be an Indian. For the moment I have accepted the Governor-Generalship of Pakistan. But I am looking forward to a time when I would return to India and take my place as a citizen of my country.” – Muhammad Ali Jinnah (Dec 1947 Karachi)

Indians have been fed the fundamentally biased idea that the All India Muslim League had been demanding the creation of a separate nation for Muslims since 1940 under the leadership of Muhammad Ali Jinnah. In fact, the Lahore Resolution does not mention the word ‘Pakistan’ while proposing the consolidation of the Muslim majority provinces and even goes on to suggest a potential confederation with the Hindu majority provinces in case of creation of the Muslim majority provinces. In his Presidential Speech in April 1943, Jinnah expressed that the name of Pakistan was being imposed on him by Hindus and that the 1940 Resolution has been falsely associated by the British Press and Hindus as demand for Pakistan.

Jinnah rejected the Cripps Mission of 1942 which provided for the secession of states or princely states that would be accorded the same status as the Indian union and could also have a constitution of its own if it did not desire to be part of the Indian Union. Instead, he supported the Cabinet Mission Plan of 1946 that expressly rejected the demand for Pakistan and emphasized the essential grouping of Hindu provinces with Muslim provinces. The Muslim League was the first to accept the plan, followed by Congress under Maulana Azad. However, Congress under Nehru expressed discontent over equitable political representation of the Muslim League in the Interim Executive Council. Jinnah supported a United India but on the condition that the constitutional rights of Indian Muslims be secured. Nehru supported the Lahore Resolution as it was more convenient for him over ensuring parity in terms of political representation of the Muslim League.

Jinnah was an ardent democrat who was a staunch supporter of secularism and the supremacy of general will. He emphasized consensus, pluralism, and popular sovereignty as being essential to democracy. The right of freedom to profess and practice religion was outlined in Jinnah’s first Presidential Address to the Constituent Assembly of Pakistan where he stated that one’s religion/caste/creed has nothing to do with the business of the state and the fundamental principle remains that all are equal citizens of the state. In fact, it was during a heated debate between representatives from Saudi Arabia and Pakistan at the drafting session of the Universal Declaration of Human Rights (UDHR) regarding recognition of Articles 18 and 19 of UDHR (freedom of conscience and freedom to change one’s religion) under Islamic Law that the Pakistani representative Zafarullah Khan hailed the adoption of these articles as an “epoch-making event” and deemed them as consonant to Islam’s empathetic denunciation of compulsion in religion.

Both countries celebrated their Independence Day on August 14th (Pakistan) and August 15th (India). You’d expect coronavirus to lead to greater levels of compassion and empathy among the people but the prejudice runs so deep that the epidemic only brought out greater levels of inherent hate and bias within the people. In the case of India, there have been incidents such as the lynching of Muslims, referring to the Tablighi Jamaat congregation as “Corona Jihad”, social media calls to impose a social and economic boycott on Muslims, arbitrary arrests of female political prisoners in a country that continues to battle against pre-trial incarceration.

Pakistan, on the other hand, has seen charities denying relief to Hindus and Christians, and has also witnessed right-wing clerics say that the “Qadiani (derogatory term used for Ahmadis) virus is more dangerous than the coronavirus. Women in both countries have shown immense courage, whether it is in the case of Indian women keeping the anti-CAA protests alive in India even in the face of state brutality and defamation attempts by the fellow citizens, or the Pakistani women conducting the Aurat March and raising slogans like “Mera Jism Meri Marzi” (my body my choice) that angered religious fundamentalists in the country.

In an attempt to counter their march, representatives from the Red Mosque brigade and local militant groups staged a rival ‘Haya March’ (haya=shame). Responding to the Aurat March, Pakistani PM said that “rival cultures” can be impeded by introducing a single curriculum for all of Pakistan and directly attacked the women by associating their demand for recognition of rights with their “western education”. The Single National Curriculum (SNC), which will be rolled out in 2021, plans to introduce an Islamic course to the curriculum that is opined to be heavier than the madrassah curriculum. The argument behind this is that it will remove educational apartheid, however, educational apartheid can be removed by making access to education uniform across all social and economic backgrounds and not by implementing a uniform curriculum especially when that curriculum aims to introduce religious teachings of just one religion.

Both the countries witnessed an attack on education at the same time: the ruling party in India, BJP furthered its agenda of a solitary approach to identity and ultra-nationalism by removing chapters on secularism, citizenship, federalism, democracy from the syllabus in the name of “reducing stress” of the students due to time crunch caused by the pandemic. The NEP introducing mother-tongue learning is likely to hegemonize the population to the Brahmanical system of learning in India.

India and Pakistan have turned into cautionary tales of religious fanaticism owing to the hijacking of the national narrative by organizations, during the history of both nations, that eventually came to be marked as turning points in the life of India and Pakistan. Ironically, these organizations were never really in consonance with the foundational beliefs of both the countries (Majlis-i-Ahrar and Jamaat-i-Islami for Pakistan and Rashtriya Swayamsevak Sangh for India). Majlis-i-Ahrar made their first public demand that Ahmadis be considered a non-Muslim minority on May 1 1949 and was also at the vanguard of the anti-Ahmadi riots of 1953 but ironically had criticized the idea of Pakistan.

It was vehemently against the creation of Pakistan (which they used to refer to as Palidistan-land of the impure). The party had also called Jinnah “Kafir-e-Azam”. This is in contrast to Chaudhary Zafarullah Khan who had drafted the Lahore Resolution and is also regarded as the visionary behind the creation of Pakistan. Majlis-i-Ahrar and Jamaat-i-Islami (another organization that had earlier opposed the idea of Pakistan, as was envisioned by Jinnah) demanded that Khan be made to resign from the post of foreign minister, along with any other Ahmadis who acquire government positions. Martial Law was imposed to put an end to the 1953 riots but this decision of the government ended up setting a dangerous precedent in the history of Pakistan as it only led to the ever-growing influence of the army and also resulted in the dissolution of the Federal Cabinet.

Khan, one of Pakistan’s founding fathers, was removed as the foreign minister was removed as the government ended up conceding to the demands of the intolerant organizations in the process of handling the riots. Could it be anticipated that what had been a demand of a religious-nationalist organization in the infant years of Pakistan would set the precedent for the ever-increasing religious intolerance in the country and also lead to the outlawing of Ahmadis as Muslims in 1974? Religious extremists turned the constitution into their political weapon of choice and the 1974 ordinance forbade Ahmadis to ‘pose’ as Muslims and gave a new definition of the national community by equating the nation with Islam. This can also remind one of the Citizenship Amendment Act of India that was passed in Parliament on December 11, 2019. According to the CAA, Hindus, Christians, Buddhists, Jains, Sikhs, and Parsi migrants who entered India illegally (without a visa) on or before December 31 2014 from Pakistan, Afghanistan, and Bangladesh and have stayed in the country for 5 years, are eligible to apply for Indian citizenship. The Act is violative of Article 14 of the Indian Constitution as it fails the test of permissible classification (intelligible differentia and reasonable object).

5th August 2020 will be etched in the memory of Indians as an ugly reminder of the Hindutva forces’ successful attempts at destroying the secular fabric of Indian democracy and the immorality of the inhabitants of the country in terms of being complicit in perpetuating hatred either by way of their silence or in some cases even active participation in violence against minorities. This day marks one year since the autonomous status of the state of Jammu and Kashmir and its statehood were revoked and it was strategically chosen by the fascist government for the Prime Minister of a democratic and secular country to set the foundation stone of the Ram temple in Ayodhya to be constructed on the same site where Babri Masjid was illegally demolished by the Hindutva forces.

Pakistan’s anti-Ahmadi laws and the subsequent episodes of violence are proof that religious laws cannot be undone. While it is hoped that citizen action will help mend the political situation in both countries, there is a growing incidence of paralyzing voices of dissent by the draconian misuse of the UAPA law in India and the Blasphemy Laws in Pakistan. Considering how politically motivated oppression of minorities is now, it would be wishful thinking to expect the political leadership of both countries to hold each other responsible for the treatment of minorities, a partnership that was envisaged in the Nehru-Liaquat Pact.

In fact, it was this Pact that was viciously used to justify CAA in India while Amit Shah (Home Minister) made claims about how India fulfilled the promises under the Pact but Pakistan did not. At this point, one can only wonder if partition really was the solution to the preservation of minority rights. Both countries continue to suffer at the hands of intolerant forces that have used this ground of division to create further divisions in the society based on castes and sects within one religion, create ever-increasing minorities and perpetuate hatred against them. As Abul Kalam Azad had once said, “the two-state policy will only create more problems than solve”. Rawls also believed that justice should be assessed behind a ‘veil of ignorance’ in order to avoid judgments that are biased due to knowledge of one’s caste, religion, race, etc.