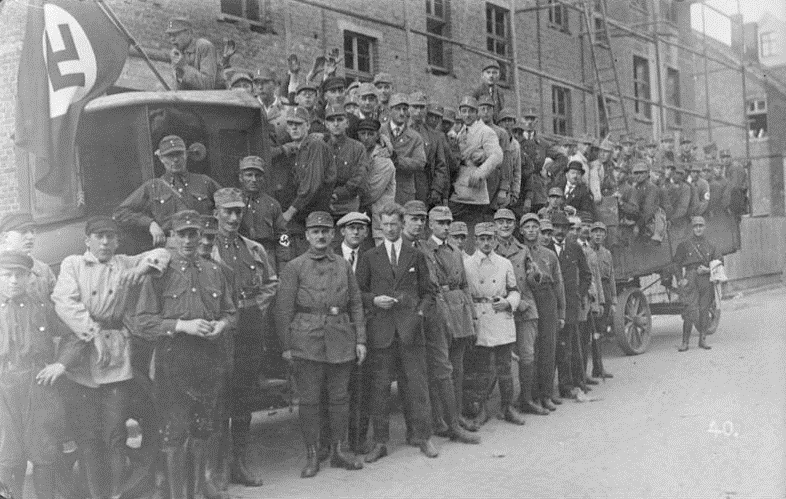 (c) Wikimedia (Unknown Author)
David M. Crane, founding Chief Prosecutor of the Special Court for Sierra Leone, draws a parallel between the rise of fascist tendencies in the US, and the spread of extremism in Nazi Germany and suggests the upcoming elections are the only means to overcome it...

Dictators, autocrats, and strongmen thrive on chaos in the beginning of their rise to power. At first they come to that power legally, within domestic law. Once in power the autocrat takes the law and uses it and bends it, eventually shaping it to his will. This is not an easy process and history shows that this phase of totalitarianism can be marked with strife, chaos, and even bloodshed in the streets. Though the law is a bulwark against tyranny it can also advance it.

Germany went through this tension early in the 1930s as Adolf Hitler and his National Socialist German Workers Party came to power. A mix of nationalism and racism, the party had been lurking in the shadows since the early 1920s. The Nazis, as they were known, had both, a political as well as a military purpose. Adolf Hitler was the head of the party overall, but he let Ernst Roehm loose with his brown shirted thugs called the Sturmabteilung (Assault Division) to sow division, chaos, and feed on the anger of a society in distress due to reparations from losing World War I and the beginning of the Great Depression.

Germany at the time was a liberal democracy; a young republic shaking off the monarchy cast aside after the war. Politically, it was unstable and amongst this perfect storm of anger and fear, the National Socialist German Workers Party headquartered in Bavaria saw its opening. Roehm’s Brown Shirts roamed the streets picking fights, assaulting non-Aryan citizens, particularly Jewish citizens. Shops were looted and burned, the Brown Shirts’ mission to stir unrest and the need for law and order became a campaign issue. Behind the scenes, Hitler encouraged Roehm, while at the same time publicly stated that his party was the party of law and order, a nationalistic group of concerned German citizens who wanted to make Germany great again, safe from the Jew and the Bolshevik. It soon became a campaign slogan. As the economy weakened further, Germany’s citizens began to look for alternatives to the current governmental structure. Hitler blamed the weak liberal government for its inability to govern a society that was controlled by Jews and Bolsheviks. As the economic stress tightened, chaos mounted, which was egged on by the Brown Shirts.

Germany was ripe for new and strong leadership and they found it in the guise of an unlikely politician, head of a once-obscure political party calling for a proud Germany, a greater Germany free of liberals and Jews who were weakening Dem Deutshe Volk (the greater German People). Making Germany great again rang true and getting control of the streets on a law and order platform of a greater Germany rallied the German people to elect Adolf Hitler Chancellor. In some ways, the rest is a sad and tragic history, but of note, the new Chancellor had no interest in being just the Chancellor; he wanted to establish total control over Germany and build a cult to advance his sordid personal agenda.  He had no intention of ever giving up power again.

To do this he turned on those he felt were a threat to Germany—the press, the law, other political parties, and of course the ultimate boogeyman, the Jews, and Bolsheviks. He used the Brown Shirts, now a complete vigilante political army, to go after and harass and intimidate these threats.

During this time, a fire in the Reichstag (a symbol of German democracy) allegedly started by his political army, (who really caused it remains uncertain) was blamed on the Jews, giving Hitler an ability to rally the nation, to take control of their very lives to save them from the existential threat of liberals, Jews and Bolsheviks. By the mid 1930s, just a few years in power, Adolf Hitler, now The Fuhrer, was in complete control and free to start his real agenda of Tausendjähriges Reich (the Thousand-Year Reich).

It all ended seventy-five years ago, in 1945, with the complete destruction of Germany, most of Europe, and the death of over seventy million people worldwide. Also, with the defeat of Italy and Japan, it was hoped and believed that fascism was dead.

Fast forward to the age of the strongman that began around 2015 and the ugly political concept of fascism, nationalism, and populism began to spread across the globe, knocking down the global village so carefully put together by the international community after World War II.

The analogy between Germany in the 1930s and America today is not perfect, yet dangerously close to being. In 2020, the United States is following a similar political path as Germany did so long ago with a President who admires strongmen. The American people are in the throes of economic strife, chaos in the streets (from time to time fed by a type of unorganized armed political group of vigilantes who support the current President), and little hope for the future under the fear of the pandemic. To an autocratic President, they are ripe “for the picking”. To an autocrat, this pain and suffering is a political opportunity and a possible path to re-election.

The only way he can win is to stoke the fears of an unsettled America shouting that liberals and non-white citizens will take over and ruin the country. This President declares his support for law and order in the street while adding fuel to a fire of rage and despair to that disorder, through his words of encouragement to right-wing thugs and terrorists that sow that anger and fear. He tells all of us that he can save the nation from the very chaos he fosters and is happening under his own Presidency. This President wants American citizens to turn on their own “boogeymen” (liberals and socialists and by implication non-white citizens) and to rally to him. Only he can save suburban America.

American citizens have one more national election to regain control of the Republic or they will hand themselves over to an autocratic President, seeking personal political power for his own and his family’s benefit and good. Like in Germany, most law-abiding American citizens find all this preposterous, unreal, and not possible, yet here we all are. The month of November 2020 is the year of no turning back, one way or the other. Note the parallels of the past in Germany (and Italy and Japan) and decide whether this amazing experiment of government by the people will ultimately end.

Abraham Lincoln’s words in the Gettysburg Address ring out, a clarion call to us all, “that government of the people, by the people, and for the people, shall not perish from the earth.”

David M. Crane is the founding Chief Prosecutor of the Special Court for Sierra Leone and is the first American since Robert H. Jackson at the Nuremberg Trial to be named a Chief Prosecutor of a war crimes tribunal. He is also the founder of the Global Accountability Network.