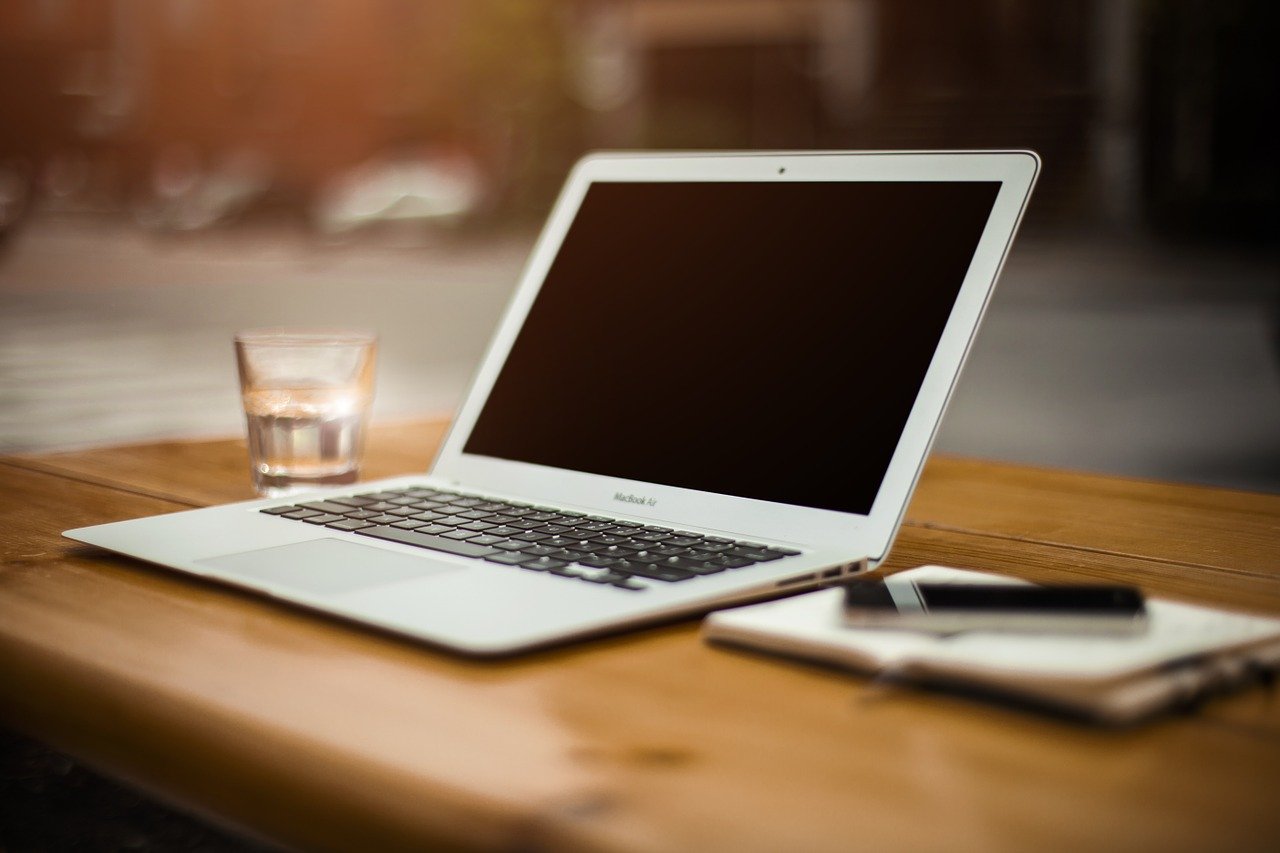 On July 15, 2020, the New Jersey Supreme Court released an Order declaring that the Bar Exam would be administered online. This would be the first time the NJ Bar exam was ever administered online. The move to online seems like a good idea amid a global pandemic killing Americans at an exorbitant rate; however, it is anything but “good.” The racial, socioeconomic, and technological consequences of an online Bar Exam will be catastrophic.

There are numerous barriers to entering the legal profession that we can all agree are fair: a firm grasp of the law and a vetting system to ensure attorneys practice ethically. But there’s no hiding it: the legal profession is by far and away inequitable. This is due to numerous economic, cultural, and systemic barriers that wind up creating a profession dominated by the White and wealthy.

For context, approximately 82% of lawyers in the United States are White, 8% are Asian, 4% are Latinx, and 4% are Black. Compared with the general population, the legal profession is overwhelmingly White. Why? Systemic barriers preventing non-White people from accumulating generational wealth among many other systemic issues related to the law school application process and the education system as a whole.

But is the process by which people are brought into the profession really racist? Yes, from the front end to the back end of the profession. In fact, one study found that 49% of Black law school applicants were not even admitted to a single law school. The final threshold to a career in the law, the Bar exam, originated as a racial barrier to the legal profession too. Bar testing began in the 1870s and by the 1920s was in use in most states, rising in popularity with the growing rates of immigration into the United States. After accidentally admitting three Black lawyers, the American Bar Association (ABA) sought to remove them from the Bar, emphasizing to their membership how important it was to “keep[] pure the Anglo-Saxon race.”

Today, Bar passage rates are quite telling. In fact, in 2016, White California Bar examinees passed at a rate of 52% while Black examinees passed at a rate of 21%. A White examinee was, therefore, 147% more likely to pass the Bar exam compared to a Black examinee. Why is that? Studies show that numerous linguistic as well as cultural differences across race contribute to the disparity in pass rates. 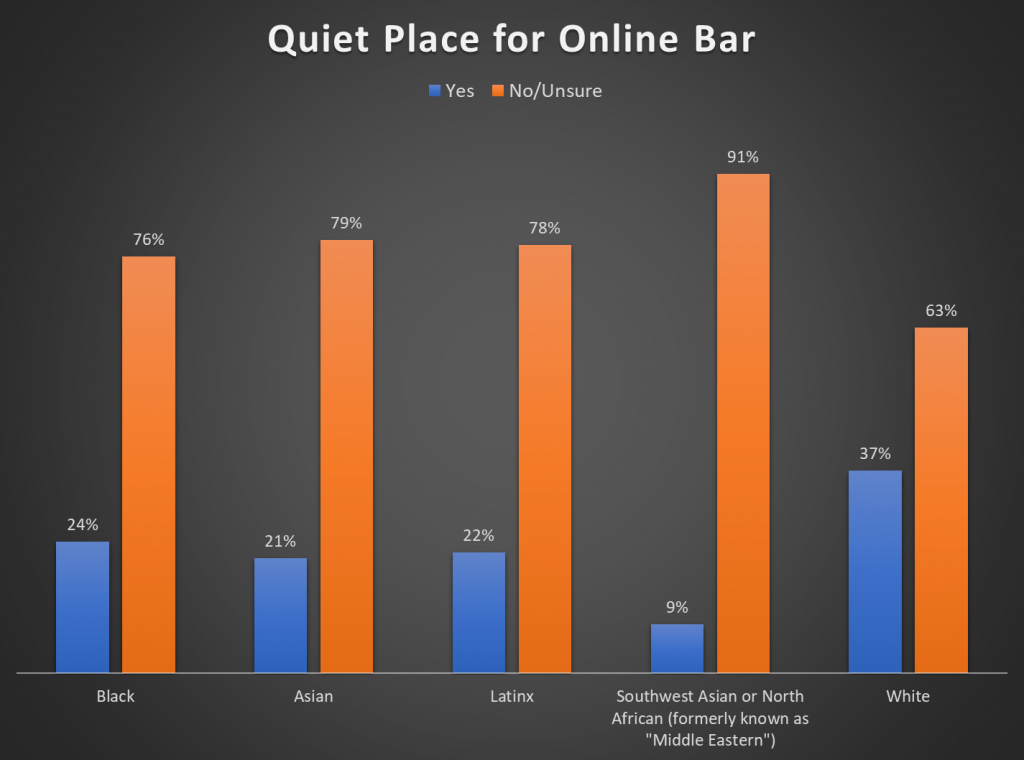 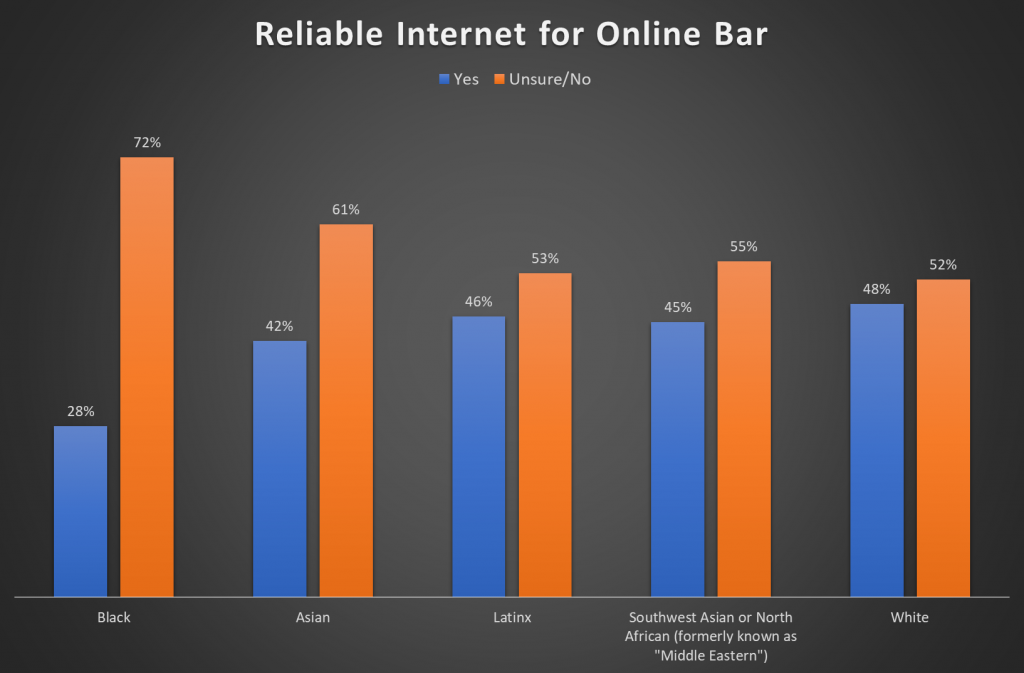 What do all these graphs show? Yes, most Bar candidates who filled out this survey are freaking out about reliable internet and quiet places to take the online Bar Exam. But it’s so much more than that.

But the disparities get worse. 87.5% of all people surveyed said that they were experiencing hardships related to financial, housing, and food insecurity, personal or family member illness, childcare, and mental and emotional health. Here’s the breakdown of hardships experienced by all applicants:

All Candidates and all hardships are not felt the same across race, however. Using the same dataset, we broke down the percentage of Black, Asian, Latinx, Southwest Asian, or North African, and White candidates who were experiencing hardships. This is that dataset. 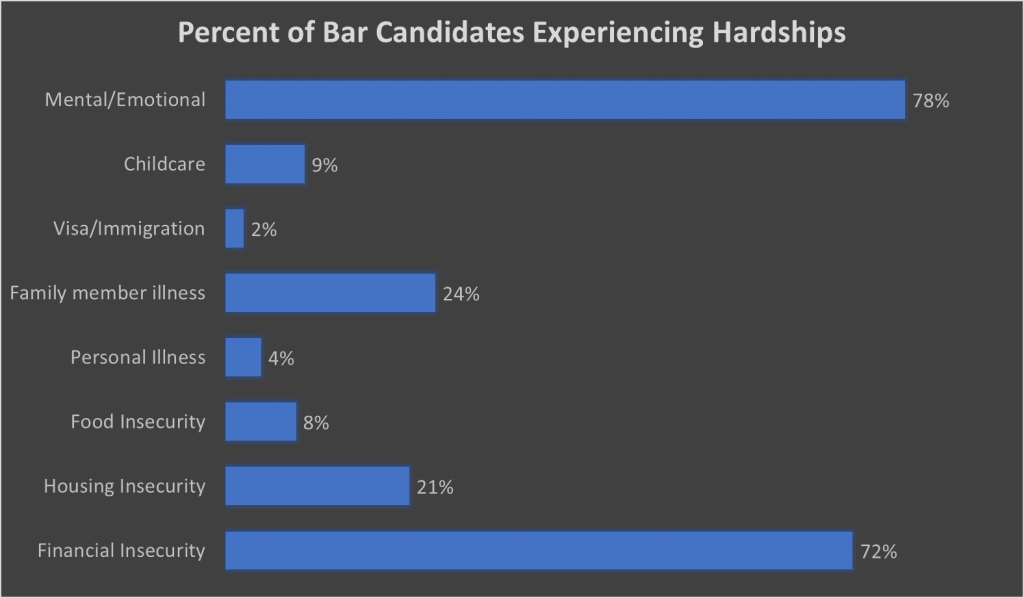 Nearly all Black candidates to the New Jersey Bar, who filled out our survey, are currently experiencing financial insecurity. The decision to move the exam to an online format in October will only make this financial insecurity worse, as that’s a month more without employment, a month longer delay in licensure, a month longer without employment-related healthcare, and a month more of trying to balance studying with these hardships.

And then there is the problem of untested technology more broadly as it relates to test-taking. Online bar exam takers will have no guarantees to a fair and reliable test-taking platform. New Jersey will be implementing this online test for the first time. If it uses existing technology, it will not be able to guarantee that the platform can support an exam as unique as the bar. If it uses a specially engineered platform or an existing platform with specially engineered features, it will not have enough time to fully beta test the platform and make sure there are no bugs that will cause widespread failures. Additionally, the platform would need to be compatible with legacy software and hardware systems unless applicants will be forced to purchase up-to-date computers to take the test. Needless to say, this would be an unacceptable expense as applicants have already paid to take the exam. 2,000 applicants have registered for the New Jersey bar as opposed to the usual 700-900. It is unclear whether an in-person is scalable to this level, let alone an untested software platform.

Further, there are examples in recent history of online testing disasters. ILG Technologies are a popular candidate to provide an online bar platform, but it is not without controversy. The company provided the platform for the July 2015 and February 2016 bar exam and the platform failed students who should not have failed. Now students are embroiled in a legal battle to recover for the damages they suffered as a result. Additionally, the LSAT was recently offered online for the first time. Coordination problems caused hours-long delays in the exam administration. The president of LSAC, the organization responsible for administering the exam, admitted that there are always issues when moving a platform online. However, there is no room for glitches when administering the bar, an exam that applicants must pass to begin their careers.

One recent testing disaster happened just this week. The American Board of Surgery (ABS) canceled the remote Surgery Qualifying Exam on the day of the exam. Several test-takers cited security concerns of stolen data off of their computer, and the ABS is launching an investigation to look into what happened. “The attempted administration of the virtual 2020 American Board of Surgery General Surgery Qualifying Exam was a failure. There is no way to sugarcoat it.” To push ahead with online Bar Exams across the country will result in similar failures.

This round of bar applicants has already been through so much peril. They deserve more than to risk their careers on inequitable testing conditions and uncertain and untested technology. Therefore, Diploma Privilege, whereby all applicants to the NJ Bar this year are granted a license to practice, is the only fair path forward.

For more information on this topic, please see the recording of the webinar hosted by JURIST and United for Diploma Privilege on July 9th entitled: “Diploma Privilege and the Future of the Bar Exam.”

Claire Newsome, J.D. is a recent 2020 Graduate from Rutgers Law School. She has multiple publications on law and technology such as Sorting Solutions: The Fix to The International Legal Framework On Cyberwarfare And Cyberterrorism Is A Decision Tree, Not A Magic Bullet, published in the Rutgers Journal of Law and Public Policy; If I Had a Dime for Every Time a Digital Platform Collected my Data: Justifying a Digital Dividend, published on the Rutgers Institute for Information Policy & Law blog; and Cloudy with a Chance of Monopolization, forthcoming in the USF IPTLJ Fall 2020 edition.

Catherine Perrone, J.D., is a 2020 Graduate of the American University Washington College of Law. While in school, she was a staffer on the Administrative Law Review and the President of the Mock Trial Honor Society. She is passionate about the criminal legal system, and her Comment, Eliminating Ambiguity and Conflict: Protecting Transgender Inmates from Sexual Violence in Federal Prisons, is published in the Administrative Law Review Accord.