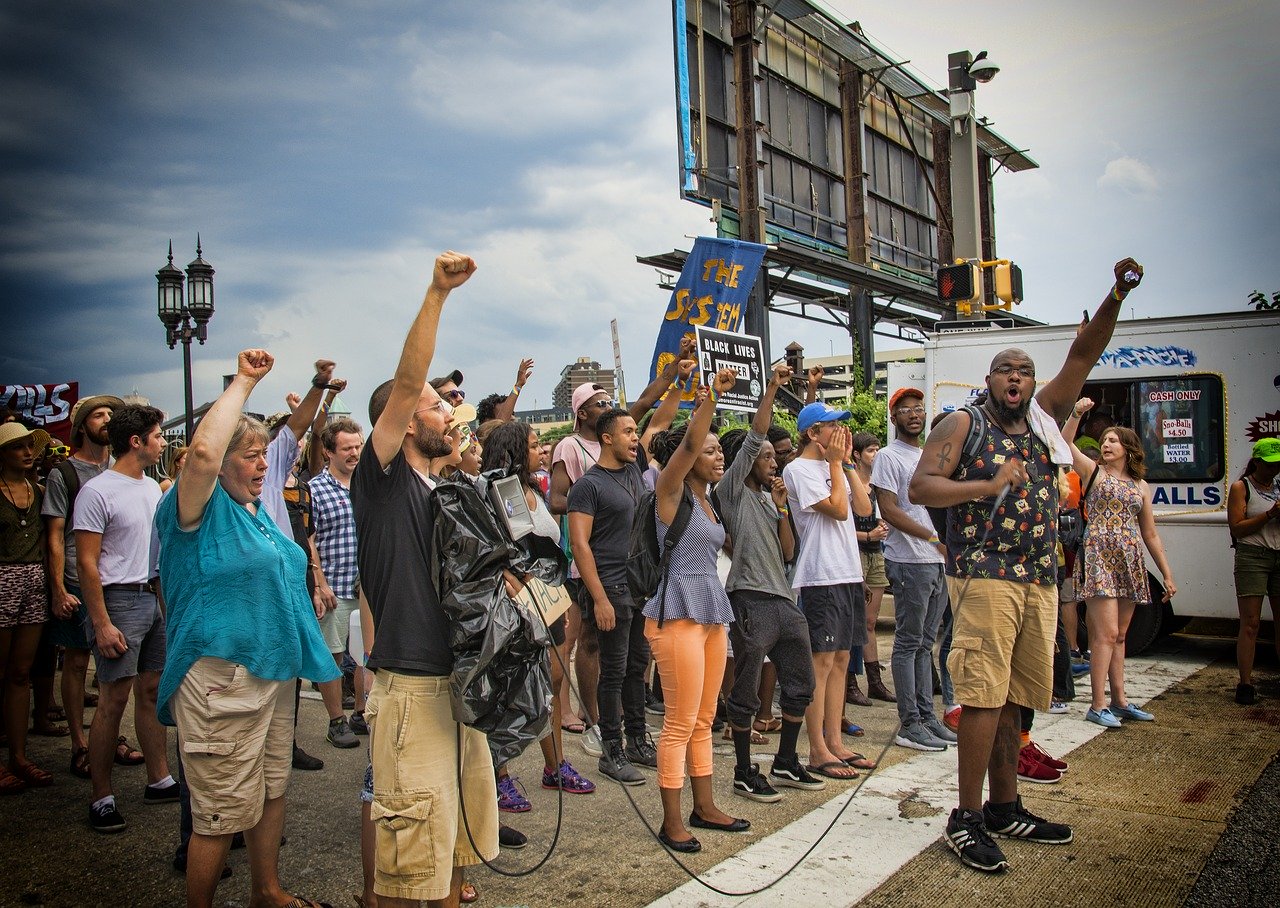 That’s not a chip on my shoulder.
That’s your foot on my neck.
– Malcolm X

On May 25, a Minneapolis police officer tortured George Floyd to death in what his brother, Philonise Floyd, called “a modern-day lynching in broad daylight.” Hundreds of thousands of people took to the streets in all 50 states and Washington D.C.; the anti-racist uprisings continue.

Why do a majority of people in this country now support the Movement for Black Lives? Why have calls to defund and abolish the police entered the mainstream discourse? Why are people risking the deadly coronavirus to join the protests? And why are we seeing what may be the broadest popular movement in the history of the United States?

More than 400 years after the first Africans were kidnapped, forcibly brought to this country and enslaved, White supremacy continues to infect our society. Police murder Black people with impunity. Black people are incarcerated at an unprecedented rate. And White fragility keeps us in denial about our White skin privilege.

In his 1963 Letter from a Birmingham Jail, Dr. Martin Luther King, Jr. said that racism must be exposed. He wrote, “Like a boil that can never be cured so long as it is covered up but must be opened with all its ugliness to the natural medicines of air and light, injustice must be exposed, with all the tension its exposure creates, to the light of human conscience and the air of national opinion before it can be cured.”

When the shocking image of Officer Derek Chauvin choking the life out of Floyd for 8 minutes and 46 seconds confronted us, we were forced to take sides. People of all races and ages were collectively enraged.

The powerful video of Floyd’s lynching is reminiscent of the 1950s Civil Rights Movement. Televised images from Little Rock in 1957 “were so forceful that they told their own truths and needed virtually no narration,” David Halberstam wrote in The Fifties. “It was hard for people watching at home not to take sides: There they were, sitting in their living rooms in front of their own television sets watching orderly black children behaving with great dignity, trying to obtain nothing more than a decent education, the most elemental of American birthrights, yet being assaulted by a vicious mob of poor whites.”

Although white supremacy continues to permeate our society, Donald Trump has unleashed the dogs of racism in a frightening way. An early promoter of the Birther movement, Trump launched his 2016 presidential campaign by calling Mexicans rapists and criminals. When he said there were “very fine people on both sides” in Charlottesville, one side was the White supremacists.

In the face of massive protests throughout the country, Trump announced on June 1 that he had ordered federal troops to Washington, D.C., “to protect the rights of law-abiding Americans, including your Second Amendment rights.” This is evidence of what Kali Akuno, co-founder and co-director of Operation Jackson, calls Trump’s “Brown Shirt Force.” In a reference that evokes Bull Connor’s 1963 threats against peaceful civil rights protesters with snarling dogs, Trump tweeted he would use “vicious dogs” against protesters who tried to breach the fence in front of the White House. “Negro Dogs” were used to catch runaway slaves and escaped prisoners during Jim Crow.

White supremacy is rooted in the belief that Black people are inferior to White people. In 1900, Charles Carroll, a polygenist minister in Missouri, wrote a rant opposing miscegenation called The Negro, a Beast; or, “In the Image of God.” In it, he portrays “The Negro, a beast, but created with articulate speech and hands, that he may be of service to his owner – the White Man.”

As revealed in my cousin Erika Cohn’s new documentary, Belly of the Beast, many people, particularly women of color, in California women’s prisons have been forcibly sterilized. Nineteen-year-old Kelli Dillon began her 15-year sentence for killing her husband who was trying to kill her. While undergoing a routine procedure, Dillon was sterilized against her will. During the 20th century, over 30 U.S. states passed laws allowing forced sterilization. After World War II, compulsory sterilizations primarily targeted non-white women. From 1909-1979, California forcibly sterilized more than 20,000 people, many labeled “defectives,” including people of color.

The Thirteenth Amendment, enacted in 1865, is widely regarded as abolishing slavery. It reads, “Neither slavery nor involuntary servitude, except as a punishment for crime whereof the party shall have been duly convicted, shall exist within the United States, or any place subject to their jurisdiction.” [emphasis added].

But Professor Dylan Rodriguez, writing in the Harvard Law Review, describes “the Thirteenth Amendment’s juridical translation of slavery from a racial chattel institution to a criminal justice function.” The amendment “in fact refurbished a fundamental (racial) power relation mediated by the racist state by recodifying the terms of bodily capture and subjection (that is, enslavement by a state).” We have what Rodriguez calls the “carceral-racial state.”

We Charge Genocide (WCG), the grassroots organization based in Chicago, disagrees with the notion that “police brutality” is exceptional rather than part and parcel of systemic racism suffered by Black and Brown people. WCG decries “systemic, institutionalized, juridically condoned police torture, cruelty, inhumane and degrading treatment, murder, harassment, and unjustified detention,” Rodriguez writes.

Floyd’s murder galvanized calls for reforms such as banning chokeholds, no-knock warrants, and the use of military weapons against protesters; ending qualified immunity for officers charged with using excessive force; mandating body-worn cameras, and the creation of a federal database of abusive officers.

In 2015, six cities including Minneapolis were part of Barack Obama’s Justice Department’s new form of policing program. But police brutality today is as brutal as ever.

Maria Nieto Senour resigned after serving for four years on the San Diego Community Review Board on Police Practices. “Unfortunately, there are members of the CRB who had such a pro-police bias that they did not represent the broader community,” she told Jurist. The board was provided with “a great deal of information from the police perspective and relatively little from the perspective of marginalized communities.” Senour said that much of what the police do “would be better done by mental health and/or social workers so funding should be shifted away from police budgets and assigned to other functions.”

The National Lawyers Guild (NLG) supports 8 to Abolition’s demands to defund the police, demilitarize communities, remove police from schools, free people from prisons and jails, repeal laws that criminalize survival, invest in community self-governance, provide safe housing for everyone, and invest in care, not cops. The NLG also supports reparations for slavery and discrimination against Africans and African descendants.

Rodriguez calls abolition “a fundamentally creative force” in one of “those rare historical moments when definitive destruction of oppressive structures and power relations appears possible, practical, and capable of catalyzing a (potentially) radically different social form.” He advocates “a radical reconfiguration of justice.”

Marjorie Cohn is professor emerita at Thomas Jefferson School of Law, former president of the National Lawyers Guild, deputy secretary general of the International Association of Democratic Lawyers, and a member of the advisory board of Veterans for Peace.