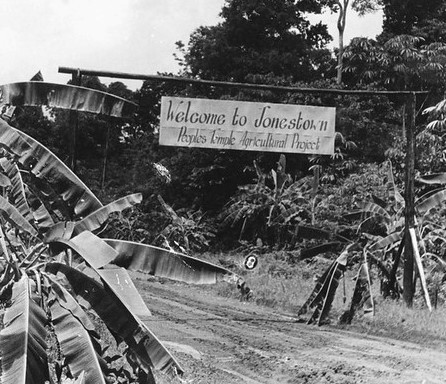 Trump’s presidency has always been one straight out of a cult leaders’ playbook. When late SF journalist Phil Tracy exposed the notoriously narcissistic Jonestown cult-leader, Jim Jones, Jones urged his followers to flee from California to Guyana, South America.

When last month, Twitter exposed Donald Trump’s false claims about mail-in ballots, Trump threatened to revoke Section 230 and destroy the Internet as we know it.

It remains unfathomable. How did Jim Jones – a no-name street preacher from Indiana – manage to convince 900+ people to abandon their families for a life of hardship in the Guyanese jungle?

To many, Jones was an enthralling speaker. Displays of grandiosity were central to his allure. From the tight-knit community of followers he congregated in Indiana, to the thousands he amassed in the original “Peoples Temple” of San Francisco, Jones was irresistibly charismatic.

But what made Jones truly “successful” was a deeply ingrained fear and distrust of the media, he sowed early-on in his followers. For Jones, in the 1970s, print and broadcast journalism proved to be the greatest threat to his slowly evaporating legacy.

Jones’ followers became a source of obsession and paranoia. When one would leave, his schemes would become more sinister. It started with the staged miracles and cures, creating in him a false appearance of godliness.

Then the rumors about the Peoples Temple began to spread. Some challenged the falsehoods Jones had been manufacturing for his audience. In response, newsletters, authored by Jones, warned of the evil and corrupt media.

To his followers, everyone was out to get the Peoples Temple. Only Jones could be trusted.

Jones instilled so much media distrust in his followers that when the Tracy exposé finally broke, they needed little convincing to join him in isolation at the Jonestown compound. Jonestown offered the opportunity Jim Jones had desperately sought all those years in San Francisco: the ability to sequester his followers from the outside world.

In his dying breath, Jones left the world with one final lie. It was “all the media’s fault. Don’t believe them,” he said.

The parallels are harrowing. Trump feigns confidence and grandiosity; he obsesses over his Twitter followers; lies about facts; arouses paranoia; retaliates against dissenters; capitalizes on fear and weakness; breeds xenophobia; and revels in absolute authoritarianism without the slightest bit of accountability.

His entire presidency is powered by empty promises, deception, and lies. From miracle cures, like hydroxychloroquine, to false claims about mail-in ballots, Donald J. Trump is our modern-day Jim Jones.

But of all the comparisons, the most concerning is Trump’s ability to create false enemies out of the Internet companies. It’s the first step in the Jonestown playbook: turn your followers against any potential sources of outside information.

The Internet poses a similar threat to Trump as the newspapers did to Jones. In many ways, especially faced with the current global pandemic, the Internet is our only connection to reality. As social media companies, like Twitter, begin to take on the role of fact-finder, Trump has become noticeably rattled.

Echoing the cries of censorship from his #MAGA fanbase, Trump attempts to exacerbate the growing tension between social media websites and their users. By exploiting the “big tech” animus his Administration has been propagating since his election, Trump readies his followers for the next stage: isolation.

What follows is the dismantling of Section 230. Section 230 says websites are not liable for the third-party content created by their users. It is, essentially, the lifeblood of the modern-day Internet.

At the same time, Section 230 enables the free-flow of information, content creation, and creative expression. Every tweet, post, comment, share, and like is a result of Section 230. Without Section 230, websites would be hamstrung by an inundation of lawsuits over the immense amount of content they host. In turn, we wouldn’t have social media, video-conferencing, instant-communication, and the information at our fingertips that we so desperately rely upon today; all the things we use to keep our political leaders in check.

Unsurprisingly, Trump recently signed an executive order to undermine Section 230 in a way that would greatly frustrate the ability of any website to abate Trump’s influence. The order would impose liability on websites that make politically motivated content moderation decisions, like fact-checking the President. Fortunately, several insurmountable constitutional hurdles probably make the order a nonstarter.

Though the order isn’t quite the cyanide-infused Flavor-Aid that will lead to the Internet’s demise, it is another grave, pro-censorship, signal from the Trump Administration. Realistically, Trump can’t take the Internet down on his own – that’s a task for Congress. Still, the order did accomplish what it originally set out to do: ignite an all out war on Section 230.

Immediately following the order, four Senators called upon the FCC to take a “fresh look” at Section 230. Reiterating the executive order’s demands, the Senators ask for the FCC to “clearly define the framework under which technology firms, including social media companies, receive protections under Section 230.”

Without targeted advertising, websites can’t afford to operate – at least not for free. Without Section 230, websites likely won’t have the resources to deal with the myriad legal risks that follow. The result: websites will just exit the market.

Just this morning, Hawley unveiled the “Limiting Section 230 Immunity to Good Samaritans Act” which would predicate Section 230 immunity on a website’s promise to operate their service in “good faith.” The bill requires websites to update their terms of service agreements to include this pledge. Failure to do so would open the litigation floodgates. Under Hawley’s bill, violating websites could be sued for $5000 plus attorney’s fees.

Meanwhile, this afternoon, the Department of Justice unveiled their proposal to scale-back Section 230, requiring websites to be fairer with their decisions to remove objectionable content; an impossible prerequisite that will inevitably result in more harm, less moderation, and less overall market competition.

Considering the role social media played in Trump’s 2016 victory, it’s baffling to think that Trump would jeopardize the tremendous power and influence social media gives him over his constituents; the kind of following and access Jim Jones would have deeply envied.

But if Jonestown is at all a preview, we know what happens next. By eliminating Section 230, Trump forces the naysayers and fact-checkers to the backdrop until eventually only his voice is left.

Or perhaps he’ll take all of us down with him. If he can’t enjoy the Internet, no one can. It’s exactly what one should expect from a petulant wannabe cult-leader.

Jess Miers is a Research Associate at UCLA Law and a third-year law student at Santa Clara University School of Law. Her research and scholarship primarily focus on Internet law, content moderation, and Section 230.