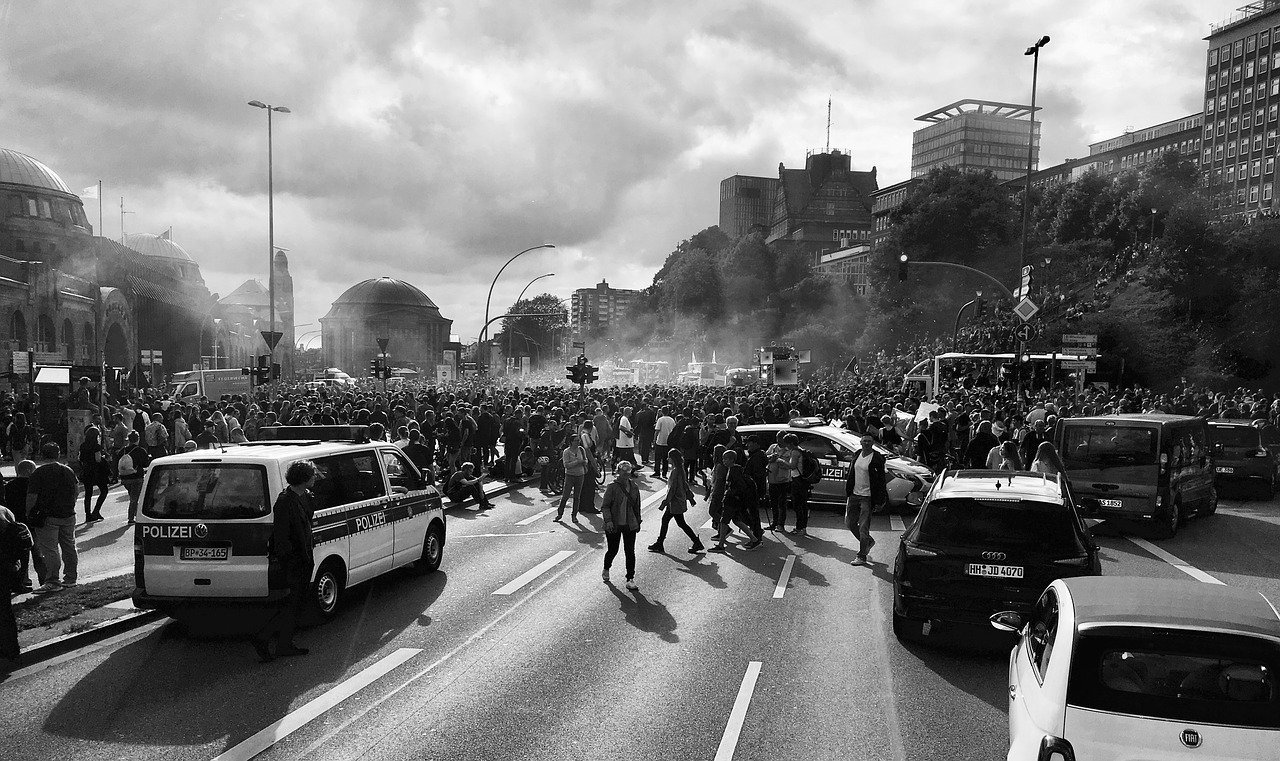 Protests ignited by the murder of George Floyd by a Minneapolis police officer continue to sweep the nation. With many demonstrations desecrated by rubber bullets, tear gas, and violent physical force, scores of volunteer medics, clearly distinguishable by the signature red duct tape on their apparel, have braved such dangers to treat injured protestors. Despite their health-driven purpose, recent events have revealed that the distinction “medic” does not grant one immunity to the violence that sweeps our nation.

During protests in Asheville, North Carolina earlier this week, police forces destroyed a medical station that stored emergency water for demonstrators. Videos on Twitter capture medics being assaulted by police as they attempt to identify themselves as medical personnel. Beyond these more isolated events, state security forces across the nation have indiscriminately barraged crowds of demonstrators and volunteer medics with tear gas, pepper spray, rubber bullets, and other “limited damage” weapons.

Although there are many parallels between domestic protests and international armed conflict, these two categories of unrest are governed by different, often paradoxical, legal frameworks. For example, international humanitarian law—commonly referred to as the “laws of war”—grants soldiers protection from chemical weapons. This body of law, however, does not protect domestic demonstrators these same weapons, such as tear gas. Furthermore, international law mandates that medics be inviolable in a situation of war, yet this status does not apply at home, a contradiction that recent protests have made glaringly obvious.

With its roots in international law, medical neutrality requires “the protection of medical personnel, patients, facilities, and transport from attack or interference,” and the principle remains “unchanged during times of conflict, civil unrest, or state emergencies”. Medical neutrality is codified into international humanitarian law under the Geneva Conventions, which the United States ratified in 1949. Pursuant to Article 24, “Medical personnel exclusively engaged in the search for, or the collection, transport or treatment of the wounded or sick, or…engaged in the administration of medical units and establishments … shall be respected and protected in all circumstances”. Furthermore, the International Committee of the Red Cross recognizes the norm of medical neutrality as customary international humanitarian law.

However, international humanitarian law applies exclusively to armed conflict, which differs from civil unrest and domestic protest. Therefore, despite their adherence to the World Medical Association’s international code of medical ethics (which obliges “physicians to give emergency care as a humanitarian duty”), domestic medical professionals working outside of an armed conflict situation lack protection from harm under this body of law.

In order to guarantee medical neutrality in present and future protests (as well as criminalize breaches in medical neutrality), it is imperative that we extend the reach of codified medical protections beyond international humanitarian law’s narrow scope of “armed conflict.” Recent events have necessitated the application of medical neutrality– legally imparted by the Geneva Conventions– to situations in which state forces use excessive, disproportionate force against civilians.

International human rights law, which applies to periods of war and peace, does not explicitly recognize medical neutrality as a human right. However, this domain of international law recognizes health as an inviolable human right. When state actors indiscriminately harm medical personnel and interfere with the provision of medical supplies/services in times of need, as has occurred during recent protests, they deprive civilians of their human right to health.

In its most basic, primordial construction, the right to health requires that governments seek to ensure a “base level of medical care” to citizens; it requires (and expects) that governments not obstruct the lawful provision of medical services to its own citizens. The security forces that destroyed the water station in North Carolina and harmed medics attempting to bandage bloody wounds and wash tear gas out of demonstrators’ eyes have not only disregarded the norm of medical neutrality but have also breached the human right to health.

By becoming a party to the Universal Declaration of Human Rights (UDHR) and the International Covenant on Economic, Social and Cultural Rights, the United States “assumed (the) obligations and duties under international law to respect, to protect and to fulfill human rights”. The UDHR includes “health and well-being”, and more specifically “medical care”, as fundamental human rights. Article 12 of the ICESC explicitly recognizes the human right to health.

Although the US signed the treaties, it never ratified them. The United States Constitution and other domestic statutes grant broad human rights– many in accordance with international treaties—but the nation does not recognize health as a universal right. Because the nation has yet to adopt domestic measures compatible with the obligation to the right of health included in the treaties, the nation is not legally bound to this stipulation. Nevertheless, depriving citizens of this internationally recognized human right constitutes a condemnable human rights abuse.

The recent violence ignited by state security forces at the George Floyd demonstrations has clearly evidenced the legal paradox associated with international armed conflict and domestic protests; the assaults upon medical personnel and medical supplies signals the need to expand the scope of international law in order to uphold the norm of medical neutrality and the human right to health. It is necessary to apply the protections of international humanitarian law beyond situations narrowly defined as “armed conflict.” Moreover, it is imperative to apply these tenets of international law into domestic legal frameworks; this can only be done through the adoption of legislation in the United States that is compatible with the human right to health, at least in its most rudimentary construction.

Faith Fisher is a Government and Spanish major at Cornell University. Fisher expects to graduate with a B.A. in 2022.