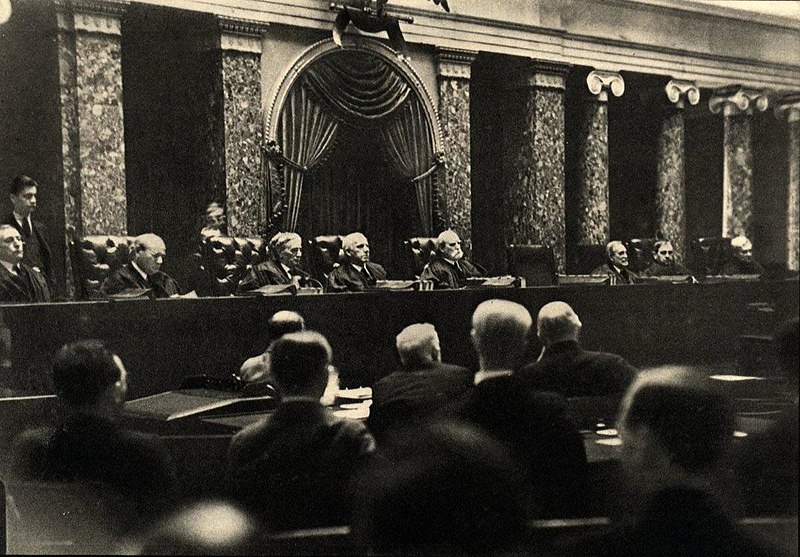 In Richmond Newspapers, Inc. v. Virginia (1980), the Supreme Court of the United States wrote, “People in an open society do not demand infallibility from their institutions, but it is difficult for them to accept what they are prohibited from observing.”

It’s easy to visualize, ahem, colorful presidential press conferences and vigorous congressional debates on C-SPAN because of broadcasts on national television. However, when it comes to the Court, supreme secrecy dominates an insulated society of robe-clad elders. Only about a few lucky 200 people per day can see our third branch of government in action. Of course, audio recordings of oral arguments are posted soon after they are conducted, but they are not an adequate substitute. For millions of Americans, real-time depictions are blacked out but for the few who have the means to travel to Washington D.C. and pack into the gallery.

The Supreme Court does not currently allow its public oral arguments to be televised, videotaped, or photographed. To date, only two photographs and one video have ever been taken while the Court was in session by individuals who brought secret cameras inside, with one individual, Dr. Erich Salmon, faking a broken arm to hide a camera in his cast. Current justices have offered divergent perspectives on cameras. Justices Elena Kagan and Samuel Alito recently addressed the topic last year before House lawmakers, expressing apprehension. Although Justice Kagan conceded that the topic had not been broached in their private sessions during her time on the Court, she, along with Justice Alito, worried that cameras may negatively influence the decision-making process by prompting theatrics from attorneys and justices. On the other hand, Justice Ruth Bader Ginsburg “[doesn’t] see any problem with having proceedings televised” because “it would be good for the public.”

Although the visibility debate has ebbed and flowed throughout the decades as small steps have been made to increase transparency by releasing transcripts and audio recordings, in light of a global pandemic, the Court has made an unprecedented move. On April 13, 2020, the Court issued an announcement that it would hear oral arguments telephonically in a number of previously postponed cases and provide media outlets with a live stream of the proceedings. For the first time in history, real-time audio access will be available. This is a noteworthy step in the right direction, which may reflect changing attitudes on the Court.

When I think about why video footage matters, I am reminded of an oral argument I recently listened to in United States v. Sineneng-Smith. After a colloquy between an advocate and Justice Steven Breyer about essentially re-writing the statute at issue, Chief Justice John Roberts quipped, “Would we have to get that passed by the Senate and House?” That jest was followed by a distinct laugh emanating from the bench. I would not have known that that laugh came from Justice Clarence Thomas had my professor—who’s met Justice Thomas—not pointed it out during our discussion of the case. All of this to exemplify that there are important verbal and non-verbal intimations that occur during oral arguments that cannot be ascertained from an audio recording alone. Allowing cameras in the courtroom would importantly cue listeners into noteworthy body language, the demeanor of the advocates, and the complete story of the arena that births decisions that substantially impact the lives of Americans.

The move to stream audio footage in real-time during this pandemic will hopefully serve as a catalyst to complete accessibility through live video streams. Rather than backtracking in a post-pandemic world, the Court should finally succumb to the most democratically-sound means of public participation in its proceedings. The Constitution grants an enormous amount of power—along with lifetime appointments—to a handful of unelected justices. The American people collectively pay a hefty amount of money to fund this government institution. At the very least, they ought to be able to observe it at work.

Christy R. Hiance is a third-year law student at Salmon P. Chase College of Law. She is a future public defender.