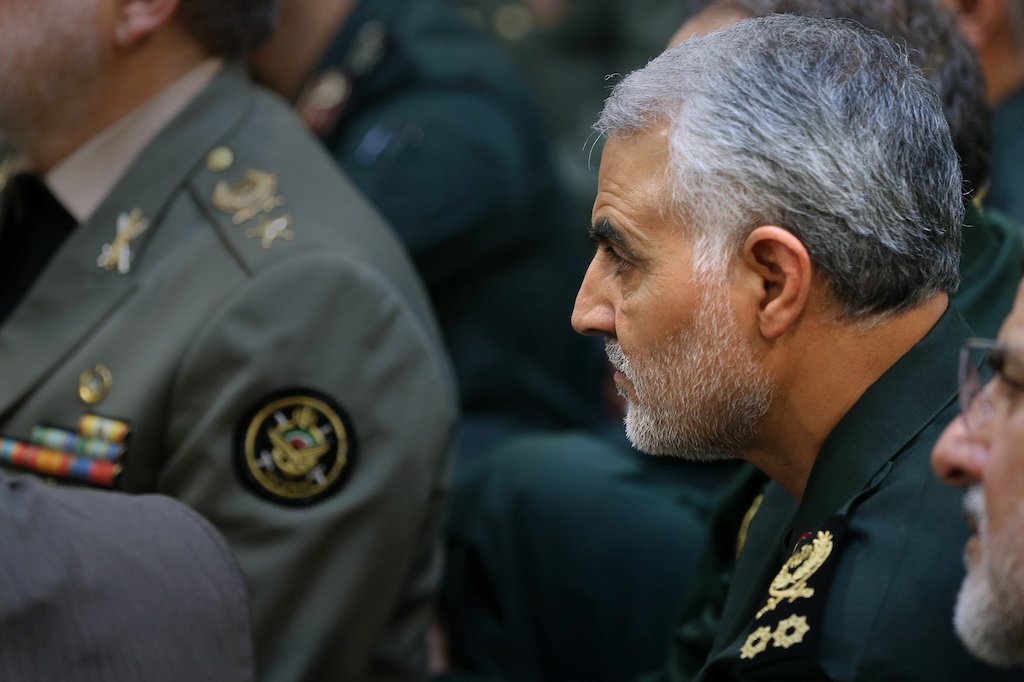 © Wikimedia/Khamenei.ir
JURIST Guest Contributor Archit Shukla, a law student at the National University of Study and Research in Law in Ranchi, India, discusses the death of Iranian General Soleimani and international law violations...

The United States of America rejoiced over the assassination of the Iranian General Qasem Soleimani while the Iranians mourned him as a national hero. The President of The United States has repeatedly shown pride in the United State’s murder of the General. The act must receive international condemnation and opprobrium. The US drone strike in January of this year was strongly condemned by the Iranian government and many superpowers of the world. A multi-city funeral was held in Iran and Iraq for both the General’s death and other casualties. This incident was considered an act of aggression by the US and a breach of Iraqi sovereignty. The act instigated negativity towards the Trump administration and the United States’ use of lethal weapons. The US government has been unable to explain the killing of General Soleimani. In the past, the US has killed non-state actors it deemed terrorists, like Osama bin Laden. However, the killing of General Qasem Soleimani differs because he was a state actor. Thus, the US violated international laws and Soleimani’s killing should be considered murder. The 2020 Baghdad International Strike is a blatant violation of international laws.

Qasem Soleimani was considered one of the most powerful Generals of Iran. He was the commander of the Quds force, a unit of the Islamic Revolutionary Guard Corps (IRGC). This division is responsible for extraterritorial military and clandestine operations. He was considered to be the second most powerful man in Iran and the right hand of man to Ayatollah Ali Khamenei, the Supreme Leader of Iran. He was the mastermind behind the Russian military intervention in Syria. The People of Iran viewed him as a “selfless hero fighting Iran’s enemies” who protected their beloved nation from international threats. But the US designated him as a terrorist. He was one of the most reputed countrymen of Iran and was presented with the order of Zolfaghar, the country’s highest military honor, for his exemplary duty to the nation.

Article 51 of the UN charter prohibits the use of force against any person except only under the two circumstances:

The US’ airstrike may have been anticipatory self-defense; However, such self-defense is unlawful. Alleged plotting and planning are not enough to attack a person who was decorated as an official by his country. The Self-defense must be instant, overwhelming and leaving no choice and means, leaving no time for deliberation. This means that states may not use force to pre-emptively halt latent threats of force

Iraqi MPs called the airstrike a “brazen violation of Iraq’s sovereignty” and passed a non-binding resolution calling for US troops to leave the country. In 2008, an agreement was signed between the two countries to deter threats to Iraqi sovereignty, security, and territorial integrity. The agreement expressly prohibited the US from using Iraq as a launching point for attacks on other countries. The Prime Minister of Iraq stated that the US violated the deal. The Iraqis’ believed that the US has put a black spot on their sovereignty.

The US has shown its aggressive nature towards terrorists, particularly of one religion, through its involvement in the Syrian war, as well as The Trump administration refusing visas to many Islamic dominated countries. The War on Terror was launched by the United States government after the 9/11 attack. The prime focus was on the Sunni Islamist fundamentalist armed groups like Al-Qaeda, the Taliban, and Tehrik-i-Taliban of Pakistan. It’s more than nineteen years since the War on Terror started.

The United States takes swift action against terrorism and identifies particular groups as terrorists. However, groups like ISIS are not a nation-state. ISIS is a self-proclaimed Caliphate which has no sovereign recognition, no UN membership, and no defined borders. Therefore, ISIS has no international rights, like the ones that give absolute power to the US to protect its boundaries and control terrorism. But Iraq, similar to the US, is a member state of the UN, has defined borders and international recognition, and has rights over any activities occurring in their territories.

The killing of General Soleimani, a top-ranking military official of a nation-state, who enjoyed the full support of the leadership of Iran, is nothing but a crime. The US attack is considered murder under international law. An attack on a general of a country who was the head of the Quds force amounts to a violation of the sovereignty of Iran. The act is clearly an act of war. There is a possibility of World War-III between US-Iran as the tensions among them are increasing day by day. The killing was not justified and the blatant international violation by the US could lead to world destruction if both the countries go on war.

Archit Shukla is a second-year law student at the National University of Study and Research in Law in Ranchi, India.