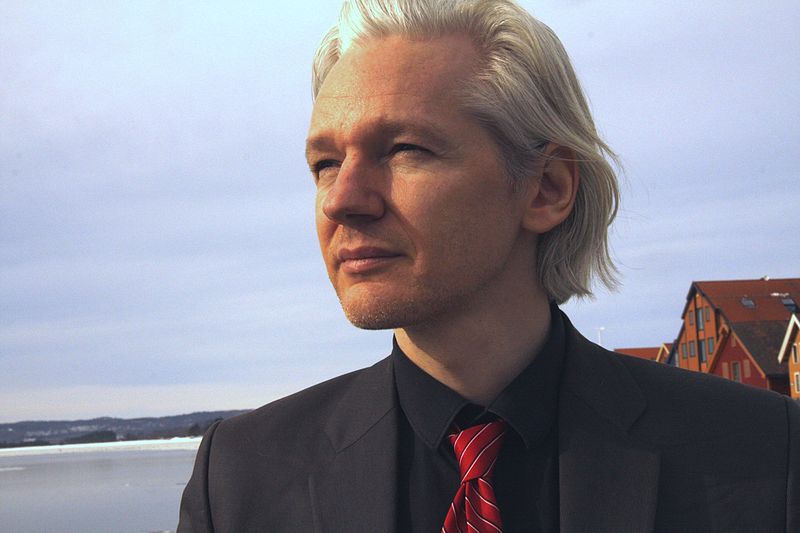 (c) Wikimedia Commons (Espen Moe)
JURIST Guest Columnists Greg Barns, an Australian Lawyer and Adviser to the Australian Assange Campaign, and Lisanne Adam, a legal academic and Consultant in EU Human Rights, discuss how despite modern nations' commitment to due process, Julian Assange is being denied due process at every turn...

Myths, often ancient traditional stories that are designed to prescribe moral or traditional values, are fantastical but also highly rational. That is because myths describe a commonly manifested belief on the way we view the world.

In 1992, Professor Jane Rutherford utilised the myth of Robin Hood in order to make a point about the myth of due process. Robin Hood is a myth and, leaving the Sherwood Forest scenery aside, it is a myth about an individual standing up to injustice and tyranny. Robin Hood aided the down trodden by taking from the rich and therefore, his legally dubious actions were seen to be for greater good.

Rutherford argues that, like Robin Hood, due process is a myth. Due process is a set of texts and moral values handed down over centuries that prescribes a fair relationship between an individual and the government, safeguarded by the judiciary. Now, roughly 25 years after Rutherford drew this eerily close comparison, due process continues to be a myth, an empty shell that is only enforceable if it suits a political agenda.

Roughly 700 years after the Robin Hood myth became a symbol for equal treatment and justice for the public, a man whom some have likened to a digital Robin Hood’ is suffering an unprecedented departure from due process.

“…No state shall make or enforce any law which shall abridge the privileges or immunities of citizens of the United States; nor shall any state deprive any person of life, liberty, or property, without due process of law; nor deny to any person within its jurisdiction the equal protection of the laws.”

Theories of justice focus on the substantive and procedural guarantees of due process: fair outcomes are a result of fair procedures that are conform to due process guarantees. In both the 5th and 14th amendment of the US Constitution, fundamental fairness is ‘the touchstone of due process’.

To return to Rutherford, the myth of due process acknowledges that there can be no justice without due process and no due process without an impartial judiciary safeguarding its guarantees.

In the case of the digital Robin Hood, Assange informed voices such as the United Nations special rapporteur on torture Nils Melzer and Bloomberg columnist Leonid Bershidsky argue that the likelihood that his case is considered by an impartial and unbiased judiciary and jury, is minimal or nil.

More specifically a premise of due process Audi Alteram Partem, is not guaranteed in the case of Assange. Audi Alteram Partem is a universally accepted due process guarantee that protects an individual against unfair governmental practices in the sense that it provides equal arms during criminal proceedings. In Brady v. Maryland, this right was emphasised to be about fundamentally protecting individuals from prosecutorial misconduct in withholding evidence. Equality of arms is an elemental safeguard against arbitrary treatment and an integral part of the scheme in it that it prescribes a range of minimum standards protecting parties’ equality.

But in Assange’s case earlier this year, US prosecutors obtained Assange’s legal defence strategy, medical records and other personal belongings from the Ecuadorian Embassy. This was an unlawful confiscation, a clear case of prosecutorial misconduct, that has been left unscrutinised by the UK judiciary through its allowing for the extradition proceedings to commence without further delay.

In the same vein, equality of arms also underpins the right to engage counsel and prepare a defence. The right to effective legal representation is undeniably a constituent of fundamental fairness. This right necessitates effective access to counsel and documents needed to prepare a defence effectively. Restriction of these rights enhance a disturbing departure from due process in it that it creates inequality of parties in proceedings.

The Government’s restriction of access to material reasonably needed to prepare an effective legal defence has also been addressed in Strasbourg, where in Albert and Le Compte v. Belgium the Court firmly protected the principle of equality of arms as an effectively enforceable element of the right to a fair trial. Parties further “must be given the opportunity to have knowledge of and comment on the observations filed and the evidence adduced by the other party” the Court held in Garcia Alva v. Germany.

Once again, in the case of Assange this right, emphasized and protected by the ECtHR, has been selectively ignored by one of its Member States. The UK, as member of the Council of Europe subscribes to the European Court’s jurisdiction and therefore purportedly honours its decisions. The UK judiciary so far, in dealing with Assange’s extradition proceedings, appears to have disregarded any due process violations by executive government. This disregard has resulted in Assange being restricted in liaising with counsel or getting access to the voluminous material underpinning the charges against him.

It hardly needs to be said that the right to counsel is fundamental protection for individuals who are being prosecuted by a well-resourced arm of government. In conforming with international and common law human rights standards, the UK needs to respect the due process guarantees which demand that Assange should have adequate time and facilities to prepare his defence. Otherwise the picture emerging is that procedural due process guarantees are reliant upon the discretion of the judiciary. This of course, disregards ECtHR precedent.

Competence to stand trial and to undergo legal proceedings is a due process guarantee deriving from a range of Supreme Court decisions stressing the importance of rational decision making. It is inextricably linked to the right of an effective legal defence. These due process guarantees derive from the seminal cases Dusky v. United States and Drope v. Missouri, where the Supreme Court has firmly safeguarded the rights of incapable defendants to effectively instruct counsel. Aside from Assange’s inability to access counsel, over sixty medical experts have recently urged his release due to his deteriorating mental and physical health. His prolonged exposure to psychological torture affects his ability to make sound decisions, potentially demonstrating a clear case of incompetence to undergo extradition proceedings, let alone to stand trial in the eastern Virginia ‘Espionage Court’. By allowing for pre-trial detention and rejecting a stay of proceedings, the UK judiciary is disregarding Assange’s fundamental right to effectively defend himself.

Due process of law has been a concept developed over centuries. The international agreed meaning of it is that it provides fundamental protections to individuals accused of a crime. The concept has received jurisprudential skepticism of the enforceability of its fundamental protections. Due process is a concept known by many but is only respected by governments when politically convenient. The legal proceedings against Assange have demonstrated unprecedented departures from due process. This commentary did not aim to alleviate deficiencies of the concept itself, it highlights the unenforceability of its guarantees in the proceedings against Julian Assange. Due process is of fundamental importance but also an empty vessel. Due process is a set of texts and common law but remains to be moral values driven by idealistic ideas of law rather than enforceable procedural and fundamental rights. Recent developments in the extradition proceedings against Assange have demonstrated the unenforceability of these moral guidelines. Due process is portrayed as an ideal element of law but is a toothless tiger if not respected by governments or the judiciary.

For the ‘Digital Robin Hood’ being prosecuted for standing up to injustice and the exposure of war crimes; due process is a myth.

Greg Barns (BA LLB) is an Australian Lawyer and Adviser to the Australian Assange Campaign. Lisanne Adam (LLB, LLM) is a legal academic and Consultant in EU Human Rights Law.