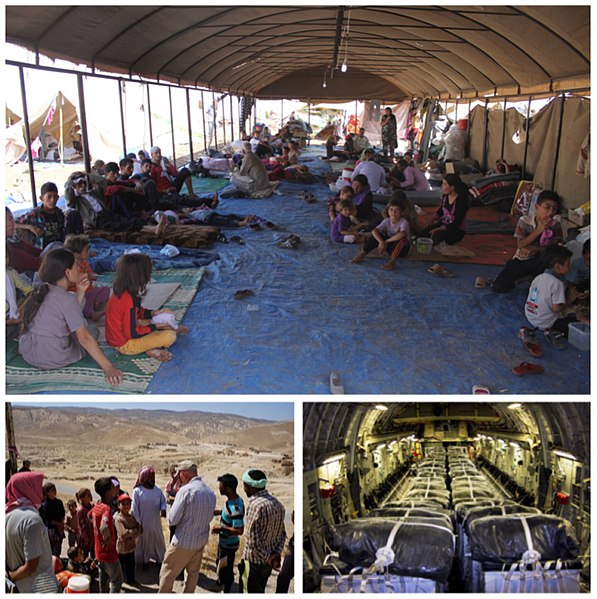 This past Saturday was the Fifth Anniversary of the latest Yazidi genocide perpetrated largely by ISIS, as other actors in the region looked the other way. Today Yazidis in the region remain in limbo. As Nadia Murad, Nobel Peace Laureate, stated last Friday: The situation remains dire. Presently there are approximately 350,000 internally displaced Yazidis in the Northern region of Iraq, mostly living in squalor in IDP camps with little of the basic human necessities. Only 80,000 have returned. Unless the Yazidis can return to their ancient homeland and make a life for themselves, ISIS’s program of genocide will be a success.

Throughout history the Yazidi people have tried to maintain a life in and around the Mt. Sinjar region in Northern Iraq. Throughout history, various groups have nipped at their heels for not being “people of the book”. The Yazidi practice a religion of pre-Islamic Assyrian traditions, Sufi and Shiite Islam, Nestorian Christianity, and Zoroastrianism. To the other peoples in the region, they have never fit in. For centuries they have been hounded and several attempts to exterminate them have been tried.

Though we live in a Global Village, cultural genocide still lingers in the dark shadows even in the 21st century. After an age of accountability, which I helped found, how could a belief of destroying a peoples in whole or in part still be a viable policy anywhere in the world? As an age of accountability slips away into the corners, with the rise of a dangerous nationalism/populism, the question posed above becomes harder to answer. The once leader in international accountability, America, has gone rouge, stepping away from its leadership role in basic human rights. It has enabled strongmen from around the world to thrive on a narrow ethnocentrism that allows for another attempted Yazidi genocide and a consequent lack of accountability as has been the case throughout history.

Though there is an awareness by the United Nations of this genocide and a review currently ongoing of those facts, little will be done as there is no appetite by a majority of the UN Security Council, led by countries who have strongmen as leaders, the United States, China, and Russia. Leaders who are silent and do nothing are as guilty and do worse than those who commit these horrific attacks. -George Stamatis

We are in a very precarious point in history, where the past seventy-five years of the United Nations paradigm is threatened and already ignored. In an age of the strongman where it seems “anything goes” at the diplomatic level, where new “truths” nibble away at international peace and security, where the Rule of Law is ignored or shaped to justify crimes, the cry of the Yazidi people echoes back and forth in the valley of the shadow of death. The Yazidi genocide that took place five years ago is an open and Festering Wound, like the unaccounted for Armenian genocide over a century ago, that will never heal without the cleansing waters of accountability. At a minimum let’s pause and reflect, are we not better than all this?

I WILL FOLLOW ANYONE…AND BEG EVERYONE…
TO BE A HERO…
AND SAVE THE YAZIDI NATION
-Widad Akrawi, Yazidi Activist

David M. Crane was the Founding Chief Prosecutor, International War Crimes Tribunal in West Africa, called the Special Court for Sierra Leone; Founder of the Syrian and Yemeni Accountability Projects; Principal, Justice Consultancy, LLC; and a Distinguished Scholar in Residence, Syracuse University College of Law. His book about that time, Every Living Thing, will be published next month.

This article was prepared for publication by Brittney Zeller, Deputy Managing Editor,  for JURIST Commentary. Please direct any questions or comments to her at commentary@jurist.org