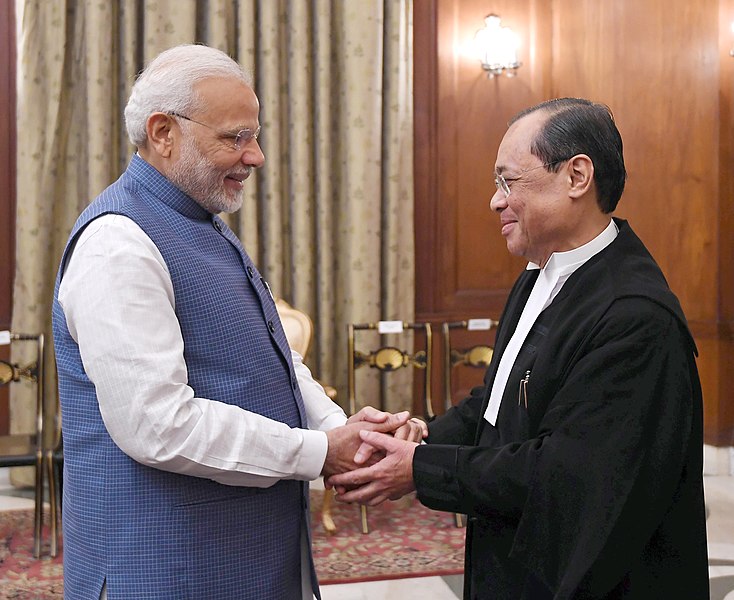 The Indian Judiciary faced an unprecedented problem when a former junior court assistant alleged sexual harassment by the current Chief Justice of India, Ranjan Gogoi. After the publication of the affidavit of the complainant in media, an urgent hearing was convened in the court of the CJI, comprising of the Chief Justice and Justices Arun Mishra and Sanjiv Khanna. The notice of registry stated that it was a matter of “great public importance touching upon the independence of the judiciary.” By taking suo moto cognizance of the matter, the Supreme Court bench of Justices Arun Mishra, R F Nariman, and Deepak Gupta was constituted. Further, the CJI constituted an in-house committee consisting of Justices S A Bobde, N V Ramana, and Indira Banerjee to look into the matter. The complainant protested against this bench due to the close relations between the CJI and Justice Ramana. The latter then recused himself from the committee saying that he did not want any suspicion in the matter regarding the standards of judicial propriety and wisdom that the Supreme Court holds as an institution. The complainant accused the in-house committee of being biased and said that she would not participate in the proceedings of the committee any further as she was not even allowed to have her lawyer present. The committee proceeded ex parte and gave a cleared the CJI after careful “examination” of the allegations.

The committee and the Supreme Court have faced severe criticism as a result of its order and the handling of the allegations in general. The criticism was not based on the allegations but the fact that the accused himself, “very graciously” became a part of the bench that examined the matter which is a clear violation of the Principle of Natural Justice “Nemo judex in causa sua” which translates to “one should not be a judge in his own cause.” Further, the authority of the Supreme Court was questioned on several occasions, viz., when the complainant was not allowed a lawyer, when the 3 judge bench of the Supreme Court continued with the proceedings even though the complainant had accused the bench of being discriminatory against her and had therefore denied to be a part of any such proceedings. Further, even after a lot of recommendations from various legal jurists for an external committee to be constituted to look into the matter, none was created and the matter stayed within the Supreme Court.

Against the various criticisms that the Supreme Court and the CJI were subjected to, there is a need to look at the legal provisions available. Firstly, the CJI is not above the other judges of the Supreme Court but the ‘first among equals’ and the other judges are neither answerable to him nor under any authority of the CJI. Therefore, the allegation that an in-house bench of the Supreme Court violates principles of natural justice is invalid as the CJI was not a judge in his own case, nor did he exert any undue influence on the other judges. Second, as to the question of constituting an external committee to look into the matter, another question that arises is who would constitute this committee. In the case of any other judge of the Supreme Court, the CJI would have the power to constitute a committee, but in the present scenario, who had the authority to do so? Thirdly, when the complainant refused to take part in the proceedings of the Supreme Court, she lost the right to obtain the copy of the Final Report. Moreover, what the committee did was investigation and not adjudication. The committee had to gather evidence, take statements from witnesses, scrutinize all valid documents, and then prepare its report with all the findings. This does not require the complainant remaining present at all stages of the investigation, therefore, the question of ex parte does not exist. Moreover, it was a fact finding committee, and therefore, the assistance of an advocate is not required, since it is a mere narration and noting down of facts. The rule of audi alteram partem would apply when the Complainant would have been the accused and not the way it has been construed here, leading this allegation to be misplaced.

There may be further arguments that the committee to look into the matter could have consisted of retired Supreme Court judges, but we cannot fail to acknowledge the vacuum in law here. The law does not provide for any provision delegating authority to constitute such a committee in the case of sexual harassment allegations against the Chief Justice of India, as compared to other cases where it is the Chief Justice who has the power to constitute committees. The Final Report should also have been presented to a full bench of the Supreme Court with the CJI and the members of the investigating committee being recused from the same, but that did not take place, which could be well placed as a violation of procedure.

The whole scenario is being viewed from a myopic point of view which points towards all the allegations being proved, but we cannot simply ignore the the facts and legal ambiguities involved in the other side.

Tanay Goyal is a First Year Student at NALSAR University of Law in Hyderabad, India