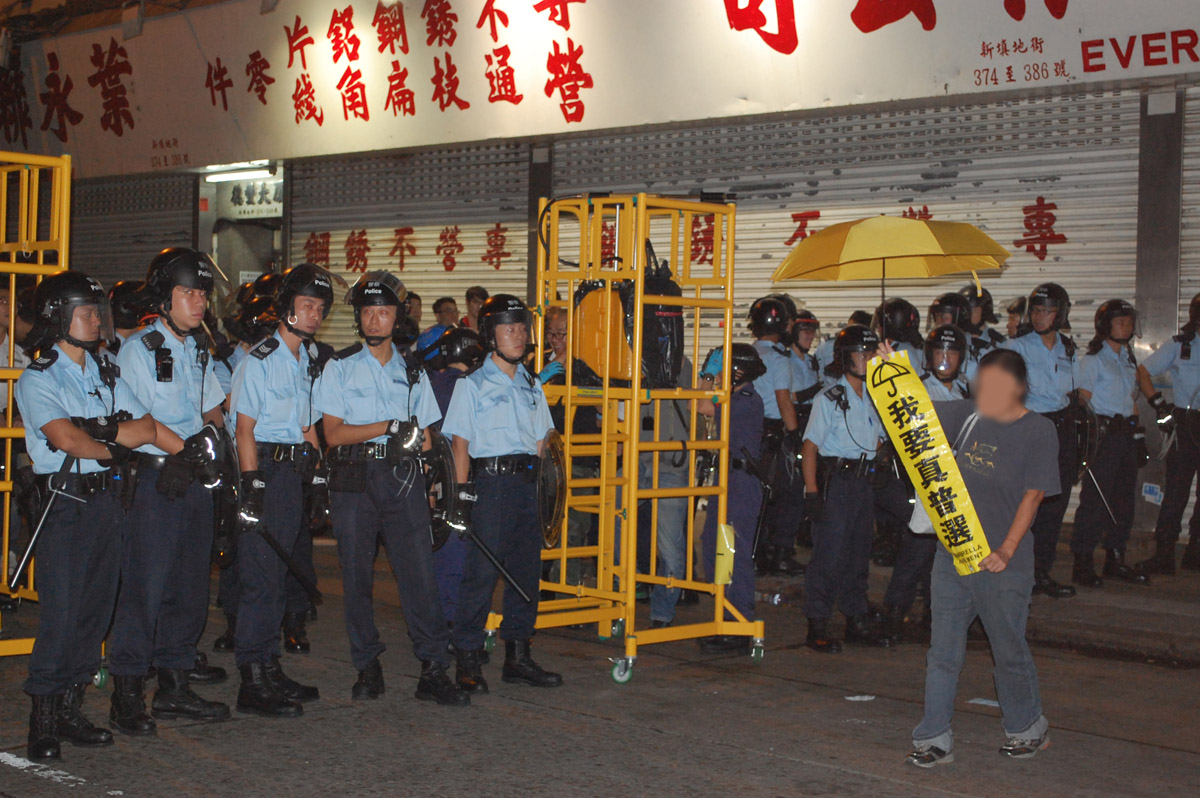 © WikiMedia (photo by Citobun)
JURIST Guest Columnist Sharon Hom, Executive Director of Human Rights in China, sheds hope and comments on fighting for the right to demonstrate in Hong Kong...

“A trial is a window into the soul of a country.”

Under the Sino-British Joint Declaration of 1984, China agreed to govern Hong Kong under the principle of “one country, two systems,” which guarantees that the city’s capitalist system and way of life will remain unchanged for 50 years following 1997. In pressing for genuine universal suffrage and political reforms, the individuals prosecuted for their roles in the 2014 Occupy Central movement were exercising rights protected by the Hong Kong Bill of Rights Ordinance, and the right to engage in peaceful demonstration under Hong Kong’s Basic Law.

On April 9, 2019, a Hong Kong district court convicted three leaders of the civil disobedience campaign “Occupy Central with Love and Peace” (OCLP) and six other local pro-democracy activists on various public nuisance-related charges. To determine whether the obstruction was “unwarranted by law,” the judge applied a lower threshold of reasonableness and considered the obstruction of the public roads, the duration of the obstruction from September 27 to December 11, 2014, and the common injury to the public. The judge also referenced the Court of Final Appeals’ judgment in Secretary for Justice v. Wong Chi Fung (2018) on the proportionality of the behavior of the protesters to the “excessive damage or inconvenience” caused, noting the “sincerity of their beliefs by accepting the penalties imposed by law.”  Balancing the right of citizens to peaceful assembly with the “excessive inconvenience” caused to the public, the judge concluded the defendants had conspired, incited or incited to incite others to cause a public nuisance.

Citing a 2017 Court of Final Appeals decision (that imposed harsher prison sentences on three student leaders after they had already completed their community service sentences), the district judge specifically rejected civil disobedience as a defense to a criminal charge. While acknowledging that civil disobedience is a long-standing and recognized jurisprudential notion, the judge stated it was not a function of the court to adjudicate the merits of the political cause behind the civil disobedience in the trial.

In response to the defense challenge to the constitutionality and appropriateness of bringing a common law charge of public nuisance instead of an appropriate statutory offense, the judge stated that the choice of charges is the sole prerogative of the Prosecutor. He further concluded that the common law offense met the requirement of legality, and that it was clear, precise, and based on rational discernible principles.

The defense also argued that the use of the public nuisance charge together with the concept of criminal conspiracy in cases concerning freedom of expression, freedom of speech, freedom of procession, and freedom of demonstration could have the effect of curtailing a free exercise of these rights.  The judge stated that since the court is required to give substantial weight to the protection afforded to peaceful demonstration under the Basic Law, he could not understand how the charge of conspiracy to cause a public nuisance could have a chilling effect on civil disobedience or suppressing rights.

On April 24, 2019, the district court sentenced Benny Tai and Chan Kin-man to 16 months in prison, to begin immediately. Noting Reverend Chu’s “impressive” three decades of service to society and his commitment to social justice, and his age and health, the judge gave Reverend Chu a suspended sentence of 16 months. The judge sentenced legislator Shiu Ka-chun to eight months, noting he was sure Shiu Ka-chun would receive proper treatment in prison for his diabetes.  Raphael Wong, the only defendant with a criminal record (related to a long history of social activism), was sentenced to eight months. The court granted a two-year suspension of the eight-month sentences for Eason Chung and Lee Wing-tat, in consideration of Chung’s relative youth and lack of experience at the time, and of Lee’s public service. The judge, noting Tommy Cheung’s young age at the time of the offense, sentenced him to 200 hours of community service and counseling and guidance. Legislator Tanya Chan’s sentencing was postponed until June 10, in consideration of a medical emergency she is facing.

The district court also highlighted the lack of expression of regret by the defendants and the lack of an apology to the members of the public, in particular, for the “excessive damage and inconvenience” that the protests caused for “ordinary folks.”

Inspired by several articles published by Professor Benny Tai on civil disobedience in early 2013, the OCLP civil disobedience movement aimed to promote a “civic awakening” to fight for genuine universal suffrage and to send a strong message to the central government and the HK SAR government about the people’s demands for electoral and political reforms. The movement developed along a process that included extensive public consultations, discussion, and debates.  The civil disobedience occupation of the neighborhood of Central, Hong Kong’s central business district, was a step of last resort. On August 31, 2014, the National People’s Congress Standing Committee issued a decision on Hong Kong electoral reform that essentially restricted the choice of future Chief Executives to a slate of Beijing vetted candidates (the “831 Decision”). The October 1 start date of the occupation of Central as originally planned by OCLP was effectively preempted when, the Hong Kong Federation of Students (HKFS) and Scholarism, initiated civil disobedience actions in late September to protest the controversial decision.

Starting on September 26 and lasting 79 days until the police cleared all the sites by December 15, 2014, the Occupy Central movement—led by students and actively supported by the original OCLP leaders—grew into the largest-scale sustained citizen protest in Hong Kong history, drawing over 100,000 people at its height. This peaceful protest, later also called the Umbrella Movement for the signature yellow umbrellas protestors used to protect themselves from tear gas and other attacks by the police, drew wide attention and support from people around the world. Despite official censorship of the movement, even netizens inside mainland China posted messages of solidarity.

Rule of law or rule by law?

Mainland China’s party-state authoritarian rule by law is casting its shadow over the long tradition of Hong Kong’s independent legal system. In the context of the serious developments that undermine the rule of law in Hong Kong in recent years (extensively examined in a new report by the Progressive Lawyers Group (March 2019)), the convictions and sentences in OC9 cases are further warning signs of intensifying attacks on the rights of Hong Kong people protected under local law and international agreements. As the PLG report specifically calls out, the “resort to criminal proceedings to criminalize the pro-democracy movement to an unprecedented extent in Hong Kong has given rise to serious concerns of political persecution through prosecution.”

The PLG report also concludes there are no signs of genuine universal suffrage in accordance with international standards. In fact, an independent body of experts, the UN Human Rights Committee, has consistently raised its concerns during its periodic reviews of the Hong Kong SAR government’s implementation of its obligations under the International Covenant on Civil and Political Rights and of the lack of meaningful progress in ensuring genuine universal suffrage and the right to participate in public affairs and to stand and run for election.

Yet against this seemingly inexorable erosion of basic rights in Hong Kong are also the unmistakable signs of the resilience, creativity, and persistence of individuals who choose to stay the course. Hong Kong is the last stand. Despite everything they have endured and will have to endure, the OC9 hold a stubborn hope for the future. Their voices are testaments to the true soul of the city, and they are not alone. When Benny Tai, Chan Kin-man, Raphael Wong, and Shiu Ka-chun reported to the Lai Chi Kok Reception Center for processing on April 24, a large crowd of supporters holding a candlelight vigil was waiting outside.

This year also marks the 30th anniversary of the June Fourth military crackdown on the 1989 Democracy Movement in mainland China. In contrast to the enforced amnesia on the mainland, Hong Kong is the only city in China where for almost three decades annual June Fourth memorials continue to draw huge crowds. In his pre-sentencing speech (translated by HKFP), Legislator Shiu Ka-chun declares:

“As a member of the June 4 generation, I etched the incident into my life because it determined what I believe or disbelieve, to whom I am loyal or disloyal, what I love or hate…. At this moment, I want to remind those who live in dark not to get used to the dark, not to defend darkness out of habit, and not scoff at those who search for the light. … [O]n the path to justice, today’s judgment can be a comma, a semi-colon, even a question mark or an exclamation mark – but definitely not a full stop.”

Beijing runs the risk again of underestimating the Hong Kong people—Hong Kongers will not go quietly into the night. With faith that the long arc of history bends towards justice, they know they have to play the long game. They will curse the darkness—and light a candle.

Sharon Hom is Executive Director of Human Rights in China, an NGO based in New York and Hong Kong. She is Adjunct Professor of Law at the NYU School of Law and Professor of Law Emerita at the CUNY School of Law. Hom has taught law for 18 years, including training judges, lawyers, and law teachers at eight law schools in China. She regularly appears as guest and commentator in broadcast programs worldwide, and is frequently interviewed by and quoted in major print media. In 2007, she was named by the Wall Street Journal as one of the “50 Women to Watch.”