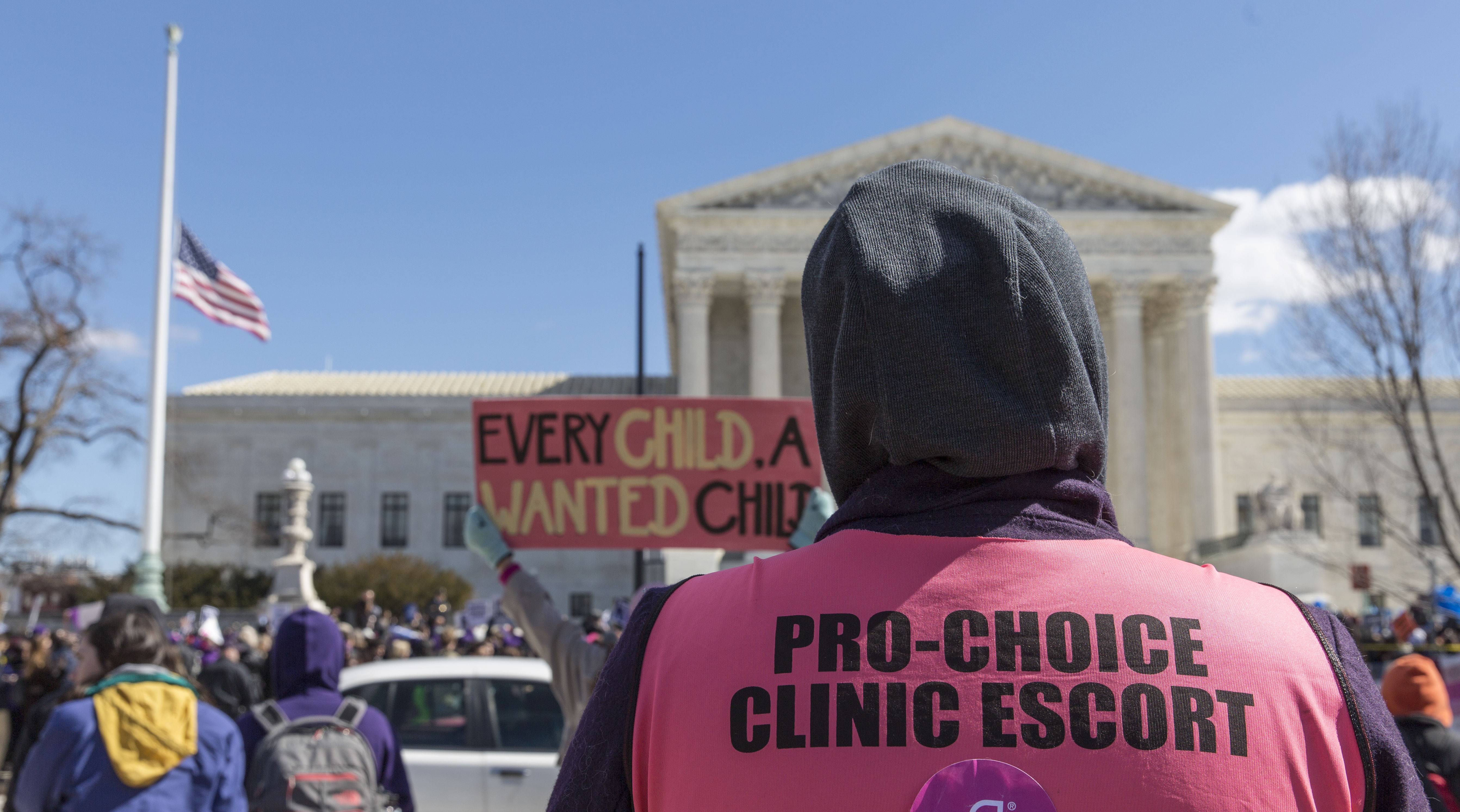 © WikiMedia (photo by Lorie Shaull)
JURIST Guest Columnist Lois Shepherd, professor of public health sciences and co-director of studies in reproductive ethics and justice at the University of Virginia, discusses misrepresentations and other flaws in Georgia's fetal heartbeat bill...

The Georgia legislature is poised to pass a “fetal heartbeat” law similar to those recently passed in Kentucky and several other states. The bill, which narrowly cleared the House, would prohibit abortions after a fetal heartbeat can be detected—generally at 6 to 7 weeks into pregnancy. Because pregnancy is generally dated from the last menstrual cycle, the bill would ban abortion approximately 4 weeks after conception. Current Georgia law permits abortion up to 20 weeks of pregnancy.The obvious question is how this statute would square with Roe v. Wade (1973) and Planned Parenthood v. Casey (1992), which protect a person’s right to an abortion up to fetal viability. The obvious answer is that the proposed law is in conflict with Supreme Court precedent. Proponents of the bill in Georgia, as in other states, aim to overturn the right to an abortion by passing a statute that directly contravenes current Constitutional law.

But the bill’s proponents do try to justify it under Casey—adopting the language of “compelling interests and “narrowly tailoring” and by proposing a new definition of “viability.” The legislature’s justifications fail because they contradict science, medicine, and common sense.

As the name suggests, the bill asserts that a fetus is “viable” when a heartbeat can be detected. It locates the basis for this claim in “modern medical science, not available decades ago.” Legislative findings quote the 2015 guidelines of the American College of Obstetricians and Gynecologists (ACOG) identifying ultrasound as “the preferred modality to verify the presence of a viable intrauterine gestation.” But ACOG’s guidelines referred to “Early Pregnancy Loss,” or miscarriage management. The ACOG guidelines cited by the legislature address how to determine whether a pregnant patient has a viable pregnancy, not whether a fetus could survive outside the womb. A fetus surviving outside the womb is the meaning of viability in abortion jurisprudence and popular understanding, not when a heartbeat can be heard.

Members of ACOG would likely be distressed the guidelines are being misused to support the proposed legislation. The organization has strongly condemned fetal heartbeat legislation, emphasizing that viability of a fetus “occurs much later in pregnancy.” Bills such as the one being considered in Georgia would, according to ACOG, serve as an “outright ban on abortion for most women” and thus prevent clinicians from “providing ethical, necessary care to their patients.” In a strongly worded 2017 press release condemning a proposed federal fetal heartbeat bill, ACOG warned that it would “turn[] back the clock to … a time where women seeking to terminate a pregnancy were forced to resort to self-induced and back alley abortions, which often resulted in serious complications and death.”

The second misuse of scientific knowledge is the bill’s reliance on the Uniform Determination of Death Act (UDDA). The UDDA, a model state law created in 1981, has been adopted in Georgia and nearly all states. It sets out two methods for determining death—when a person’s heart irreversibly stops (“irreversible cessation of circulatory and respiratory functions”) and when a person succumbs to “brain death”—when all brain function has irreversibly stopped. The proposed law assumes that we can and should use the same method to determine when a fetus becomes a baby as we use to determine the end of life. This requires a leap from determining death to declaring human being status.

But the bill also reveals a deep misunderstanding of how modern science and law understand death. The bill tells us that “the UDDA affirms that a consistent human heartbeat, independent of life support, is a core determining factor in establishing the legal presence of human life.” But the fact that a person with a consistent heartbeat, independent of life support, is alive is not a modern scientific discovery. In fact, when artificial ventilators became available, we consistently treated all persons whose heartbeat could be maintained by artificial aid as alive. The UDDA recognized that sometimes persons are not alive though their heartbeat is maintained.

Anti-abortion activists increasingly claim that “pro-life is pro-science.” Mary Ziegler, Florida State University law professor and an expert on the history of abortion law, writes that “Over the past few decades, the abortion wars have become as much a fight about science and medicine as they are about the law and the Constitution.” She cites as examples activists’ claims that fetuses can feel pain—about which “there is very little consensus”—and that abortion increases a person’s risk of breast cancer—a link that has been clearly refuted.

It is tempting to gloss over the bill’s purported “findings” and simply label them specious. They are. And it’s clear what the bill is about—overturning Roe and Casey to eliminate the right to an abortion. If the proposed law passes, it will likely be immediately blocked by a court as unconstitutional, as courts have blocked similar laws.

But those opposing abortion access have longer-term goals. Arguments found in the Georgia bill may find traction if not rebutted. These arguments can seem powerful because they are cloaked in the language of science and medicine, replete with references to esteemed professional organizations and widely accepted laws. Such arguments might convince some people who do not have the background or resources to critically examine them.

The bill’s sponsor, Representative Ed Setzler said about the bill, “Protecting life in the womb with a human heartbeat is what science, law and human conscience would suggest.”

We can debate what human conscience suggests. But let’s get the science and law right. These scientific claims are wrong and not subject to debate. They must be called out for what they are, misrepresentations to manipulate emotions and move agendas.

Lois Shepherd is a professor of law, professor of public health sciences, the Wallenborn Professor of biomedical ethics, co-director of studies in reproductive ethics and justice at the University of Virginia, and a Public Voices fellow with the Op-Ed Project. Follow her on Twitter: @loislshepherd.