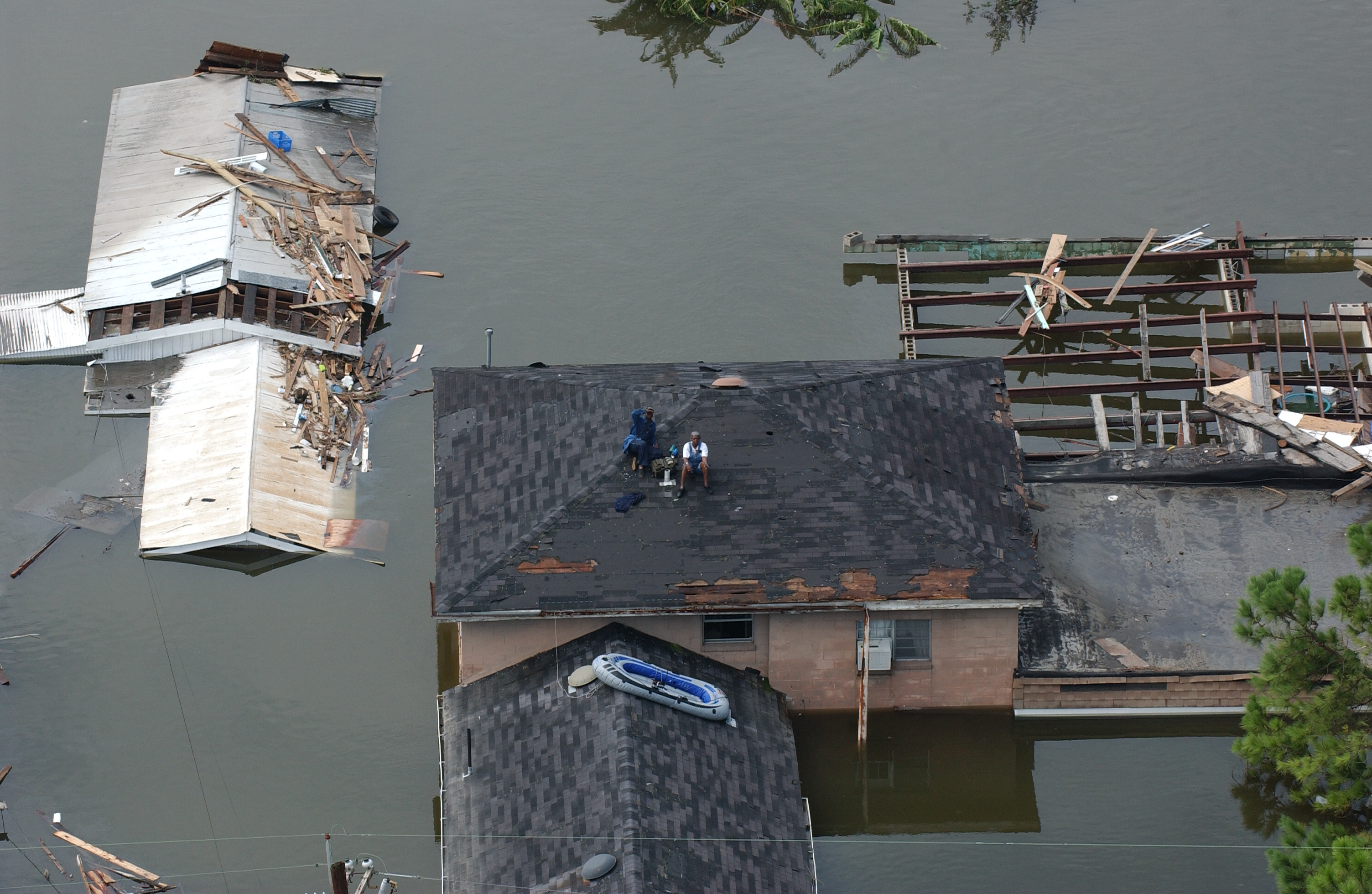 New Orleans, LA--Aerial views of damage caused from Hurricane Katrina the day after the hurricane hit August 30, 2005.Photo by Jocelyn Augustino/FEMA
JURIST Guest Columnist Kevin Govern of Ave Maria School of Law discusses how past should – and should not – be prologue regarding US disaster assistance…

When considering the comments in the wake of Hurricanes Katrina and Rita, with the perspective of thirteen years since their landfall, I’ll paraphrase Mark Twain’s comment about an erroneously pre-mature 1897 obituary: “the reports of [disastrous performance and] death are greatly [but not entirely] exaggerated.” The perspective of time and the restoration of many services to the Hurricane Katrina and Rita-stricken Gulf Coast reveal that matters of government ineptitude and dreadful disaster relief efforts were not quite as they seemed closer to the event, and that even reputable news sources were prone to advancing hyperbolic accounts if not “fake news.”

On September 29, 2005, the front page of the New York Times announced with calm perspective that “fear exceeded crime’s reality” in New Orleans. The reportage from Jim Dwyer and Christopher Drew described how “some, though not all, of the most alarming stories that coursed through the city [of New Orleans] appear to be little more than figments of frightened imaginations, the product of chaotic circumstances that included no reliable communications, and perhaps the residue of the long-standing raw relations between some police officers and members of the public.” New Orleans’ then Police Superintendent, Edwin P. Compass III, reported on September 1, 2005, amongst other things, of “tourists being preyed upon” that now seems exaggerated as the police department has “no official reports ofrapes and murders” and “not one official report of rape or sexual assault.” For that matter, it seems of the 885 dead, only about six or seven deaths appear to be homicides. However unacceptable that toll may have been, it is well within the 5.09 murders per week which New Orleans might have “normally” expected, since its murder rate was an incredible 10 times that of the national average (265 in 2004, which still is lower than 421 in 1994). New Orleans can scarcely boast of a robust police department, especially when several hundred of its force walked off the job during a crisis. In the best of times there were only 3.14 officers per 1,000 citizens – less than half of that of Washington,D.C.

What successes and failures might we now see more clearly, and outline ever-so-briefly – with hind sight corrected to 20/20 – about how local, state, and federal government performed during Hurricane Katrina? Strike up the strident Sergio Leone – Ennio Morricone soundtrack of my favorite 1966 “spaghetti western” movie, but join it with Jazz-Cajun-Zydeco undertones, as we retell a Gumbo Gulf Coastal tale of fear, fate, disorder, and dynamic heroism, with chronology categories of “the Good, the Bad and the Ugly.” (With reliance on chronological materials from the Brookings Institute):

THE GOOD:  On Friday, August 26, at 9:00 am, the White House declared that an impending disaster was about to take place in the Gulf Coast, ordering the Federal Emergency Management Agency (FEMA) and  the Department of Homeland Security into action. The lawful military support to civil authorities would be in accordance with over a century of federal troop deployments and 200-plus years of legal precedent.

THE BAD AND THE UGLY:  Unfortunately, it takes 14 hours for Governor Blanco of Louisiana to declare a state ofemergency, setting the stage for an ugly set of events to follow.

THE GOOD:  On Saturday, August 27, the National Hurricane Center director calls Mayor C. Ray Nagin to advise him to conduct a mandatory evacuation of New Orleans.

THE BAD: Mayor Nagin waits until 5:00 p.m. that day to direct a “voluntary” evacuation of his city, with residents in low-lying areas encouraged, but not mandated, to leave.

THE GOOD:  Rising early to cope with the impending disaster, at 9:30 a.m. Mayor Nagin orders that the Regional Transit Authority buses pick up people to transport them to places of refuge.

THE BAD AND THE UGLY:  Throughout the day of August 28, people fleeing low-lying areas are seeking places elsewhere IN THE CITY OF NEW ORLEANS including the convention center and the Superdome. The latter site fills with 10,000 people ill-prepared to weather out the storm or sustain their own individual needs. The convention center was never on the New Orleans Comprehensive Emergency Management Plan, hence its becoming ill-suited to its desperate “visitors.” Likewise, the famous domed Superdome sports venue becomes infamous with scenes of refugee-camp squalor, guarded by only 150 National Guardsmen. Mayor Nagin finally sees the need for a mandatory evacuation and orders the same at 11:00 a.m. However by noon, highways out of New Orleans are blocked. FEMA sends water, food and supplies (unfortunately not far enough) to Texas and Georgia, but not toAlabama, Mississippi or other closer distribution locations.

THE GOOD, THE BAD AND THE UGLY:  By 11:00 in the morning on Monday, August 29, the FEMA director orders 1,000 employees to the afflicted area. This is, however, five (5) hours after Hurricane Katrina’s landfall, and those 1,000 FEMA workers are given an entire two (2) days to arrive on scene. Furthermore (incredibly), the New Orleans’ fire and police “first responders” are told to only come to the city if there was “proper coordination between the state and local officials.” This begs the question of who would know whether there was proper coordination and how they would know that, and why FEMA would interfere in local disaster relief in the first place.

THE BAD AND THE UGLY:  Not until Tuesday, August 30, does FEMA activate its then-eight-month-old (December 2004) National Response Plan (NRP); incredibly, FEMA stops volunteer fire fighters from coming to the city and asks them to wait for the National Guard instead. The Superdome still is overwhelmed with people, and there is no plan to evacuate it until that morning when Governor Blanco orders the Superdome’s evacuation, but fails to set a timetable or provide for adequate assets to do so. Reports of widespread looting, however factual or exaggerated, led the police to focus on crime-fighting rather than search-and-rescue.

THE GOOD: On August 30, FEMA boosts disaster support later in the day with 29 medical teams and 1,700 trailers, trucks, and military assets to evacuate the seriously wounded and ill. Military support increases to 30,000 troops.

THE BAD AND THE UGLY:  On Thursday, September 1, FEMA suspends water rescue, and the Superdome still is overcrowded with 45,000 displaced citizens. In surrealistic simulcasts of scenes within the Superdome and emergency leaders out of touch with ongoing events, both DHS Secretary Chertoff and FEMA director Brown are interviewed on national television stating that they were unaware of the situation at the Superdome and convention center until a few hours before. Violence (purportedly) escalates throughout New Orleans.

THE GOOD:  On Thursday, September 2, Congress approves $10.5 Billion for immediate rescue and relief efforts. Within 24 hours, President Bush will order another 7,200 active forces to the Gulf Coast and an additional 40,000 National Guardsmen.

THE BAD AND THE UGLY:  Despite the increase in Federal and Louisiana State presence by September 5 with another 4,700 troops deployed, reports are that 200 New Orleans police officers had “walked off the job,” and 2 committed suicide days prior in the midst of the crisis around them. There are still “stragglers”in the Superdome the following day. Despite having declared a state of emergency on August 26, Governor Blanco declares on the 4th of September a state of “public emergency,” and Mayor Nagin’s dire September 6, 2005 claimed observations of “watching hooligans killing people, raping people” is countered with a “police emergency” declaration resulting in doubts in the minds of those who must enforce it as to whether the use of force will be authorized.

EPILOGUE TO THE BAD AND THE UGLY: To be sure, many lessons were learned and re-learned from what went well and what went wrong in the planning, preparation, and execution of emergency services and disaster assistance. This extended to a myriad of other disasters including, but not limited to, Superstorm Sandy. Through collaborative efforts of FEMA and the Louisiana Governor’s Office of Homeland Security and Emergency Preparedness (GOHSEP), more than $19.6 billion in direct and indirect assistance has come over the past thirteen years, providing temporary housing to nearly 85,000 families displaced by Katrina and Rita, with FEMA claiming as of three years ago, all of these survivors had returned to longer-term housing. At the same time, many agencies, including the military, sought the opportunity and resources to “get well” and become “fully equipped and ready to deploy instantly in a crisis.”

As tempting as it may be to suggest scrapping existing state-federal planning and disaster relief execution in favor of a privatized solution, I would suggest that capable corporations and caring charities that aren’t habitually “in the business” of disaster relief can only provide spirited but sporadic, heartfelt but ad hoc, relief efforts. What contract-charity-corporation conglomerate could cover 90,000 square miles of affected area and mobilize the entire Federal, state, and local government to support rescue and recovery as FEMA did (or attempted to do)? Could that conglomeration deploy 72,000 personnel to rescue 33,000 people, directly aid 90,000+ people, or provide billions in disaster assistance to over 600,000 households?

Enlightened leadership at the local, state and federal levels, employing prescient planning, and enhanced organizations, will be able to effectively cope with the next “major disaster” and beyond.

Kevin Govern is a Professor of Law at Ave Maria School of Law. Professor Govern began his legal career as an Army Judge Advocate, serving 20 years at every echelon during peacetime and war in worldwide assignments involving every legal discipline. He has also served as an Assistant Professor of Law at the United States Military Academy and has taught at California University of Pennsylvania and John Jay College. He has published widely and spoken frequently on international and comparative law, national security and homeland security, cyber security and cyber defense, military operations, and professional ethics.