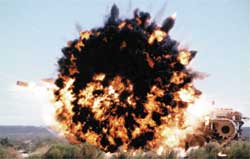 JURIST Guest Columnist Mark A. Summers of Barry University School of Law discusses the legality of choice of weapons in the Syrian war in the context of International Humanitarian Law …

Amnesty International (AI) recently condemned the commission of war crimes and crimes against humanity by the Asad government and rebel forces in Aleppo, Syria. In a lengthy report [PDF], AI found that more than 3,000 civilians have been killed in Aleppo in the last year alone. The death toll is more than 11,000 since 2012. A substantial number of the casualties are attributed to the Asad regime’s use of a weapon called a barrel bomb. In the month before the AI report (March-April 2015), there were 85 barrel bomb attacks that killed 110 civilians. The opposition forces are alleged to have used another improvised weapon called a “hell cannon,” which is said to have caused at least 600 civilian deaths in 2014. This commentary will attempt to ascertain whether the use of barrel bombs or hell cannons is a per se violation of International Humanitarian Law (IHL).

The barrel bomb is described in the report as an improvised weapon dropped from a helicopter that is made from oil tanks, fuel tanks or gas cylinders, filled with “explosives, fuel and metal fragments—such as ball bearings, nails and machine parts.”

“[T]he large number of civilian casualties is likely due to the fact that barrel bombs are so imprecise that the government rarely drops them near the front line, where they might hit their own forces. Instead, barrel bombs have struck apartment buildings and populated areas such as public markets, transportation hubs and mosques.”

Especially hard hit have been hospitals in opposition-controlled areas, many of which have been forced to move underground due to the frequency with which they have been damaged by barrel bombs. The barrel bomb attacks have created an atmosphere of fear among the residents of Aleppo, which caused one of them to describe it as a “circle of hell.”

The “hell cannon” is an Improvised Explosive Device (IED) that features a cannon barrel around 3-ft long attached to wheels. The weapon has a range of 1.5 kilometers and can fire projectiles filled with explosives and shrapnel weighing more than 40 kilograms. Like the barrel bomb, the hell cannon is so imprecise that the attacks have been described as “completely random.” Also like the barrel bomb, the targets damaged or destroyed by the hell cannon have been civilian objects, such as residential neighborhoods, medical centers, schools, mosques and other cultural and historic sites in government-held areas of Aleppo. In addition, in 2014 alone the Syrian Observatory for Human Rights documented 672 civilian deaths due to “indiscriminate shelling in Aleppo city.” The AI report concludes that attacks by both the government and opposition forces amounted to war crimes and/or crimes against humanity.

IHL regulates the means and methods of warfare. This body of law, the jus in bello, applies to the participants in an armed conflict, regardless of the legality of the conflict in the first instance. There are four key interrelated principles that are applied to determine whether a particular means or method of warfare is legal. Those principles are: humanity (means and methods cause the least possible suffering); necessity (means and methods designed to defeat the enemy militarily); distinction (means and methods directed toward military, not civilian, targets); and proportionality (damage caused by means and method justified by anticipated military advantage). [Arts. 51, 52(2) & 57, 1977 Prot. I to Geneva Conventions]

IHL’s basic rules are found in international treaties—the 1899 and 1907 Hague Conventions, i.e., Hague Law and Protocol I (1977) to the 1949 Geneva Conventions [PDF]. In addition, most of these treaty rules are regarded as customary international law that is binding on states whether or not they are parties to the conventions.

There is also a Cluster Munitions Convention that became law on August 1, 2010. It bans, inter alia, the use, development, production or acquisition of cluster munitions, defined as “a conventional munition (including one released from an aircraft) that is designed to disperse or release explosive submunitions each weighing less than 20 kilograms.” An explosive submunition functions “by detonating an explosive charge prior to, on or after impact.”

Both the barrel bombs used by the Syrian government and the hell cannons used by the opposition bear similarities to cluster bombs. It is arguable, however, that barrel bombs and hell cannons do not violate the express terms of the Cluster Munitions Convention because their projectiles, while propelled by an explosive charge, are not themselves explosive. Indeed, the drafters of the Cluster Munitions Convention were especially concerned with the tendency of cluster bombs to leave behind unexploded ordnance, the remnants of which “kill or maim civilians.” The non-explosive projectiles packed in barrel bombs or the shells fired by hell cannons would not appear to present this danger. Nonetheless, an argument could be made that the broader purpose of the convention—protecting civilians and civilian objects from indiscriminate attacks—would be served by reading the terms of the convention broadly to include barrel bombs and hell cannons that “detonate [their] explosive charge[s] … prior to impact.” Even if this interpretation were accepted, however, the Cluster Munitions Convention would not be binding on Syria which is not a party to it. Moreover, there is no consensus that cluster munitions are per se illegal under international law.

Certain weapons, however, are so indiscriminate that they are regarded as per se illegal regardless of the presence of any lawful military targets. Key to this determination is whether the weapons used offer any definite military advantage to the forces employing them. A Trial Chamber of the International Criminal Tribunal for the Former Yugoslavia (ICTY) considered [PDF] the legality of the use of Orkan rockets which were fired by the army of the self-proclaimed Republic of the Serbian Krajina from a distance of 50 kilometers into Zagreb, the capital of Croatia. The Orkan rockets “were equipped with 288 bomblets each of which, on explosion, propels jagged bits of metal and more than 400 small steel spheres in every direction.” The rockets had a lethal range of 10 meters and a lateral error factor of as much as 600 meters from the distance at which they were fired. Accordingly, the court concluded that “[i]n respect of its accuracy and striking force the use of the Orkan rocket in this case was not designed to hit military targets but to terrorize the civilians of Zagreb.” Substitute “barrel bomb” or “hell cannon” for “Orkan” and this language would seem equally applicable to the weapons being used in Syria.

The assessment of the legality of a weapon, however, cannot be based exclusively on its infliction of damage to civilians or civilian objects. International Humanitarian Law tolerates a certain amount of “collateral damage,” so long as it is proportional to the expected military advantage to be achieved by using the weapon. Any assessment of proportionality thus requires consideration of whether the weapons used were aimed at legitimate military targets.

On this point, the AI report documented eight incidents involving the use of barrel bombs by the Syrian government and four incidents of the use of hell cannons or other improvised rockets by opposition groups. In five of the eight barrel bomb attacks, potential military targets were identified at distances ranging from 250 meters to 4 kilometers from the site of the strike. In the other three attacks, no legitimate military targets were identified. In all cases the only casualties were civilians and the only damage was to civilian objects. Of the four attacks attributed to hell cannons or improvised rockets, only one military target, 200 meters from the site of the attack, was identified. As with the government attacks, there were no recorded military victims or damage to military property.

In a recent case [PDF], an ICTY trial chamber found that artillery shells which fell within 200 meters from an identified military target were deliberately aimed at the target, while those that fell outside the 200 meter radius were deliberately aimed at non-military targets. While this finding was overturned [PDF] by the ICTY appellate chamber because there was insufficient evidence to support the trial chamber’s adoption of the 200 meter standard, it does provide some insight into the precision of targeting and the degree of accuracy expected of modern weaponry. And, significantly, in only one of the 13 documented attacks in Aleppo was a potential military target identified which met the 200 meter standard.

It is clear that the weapons used by both government and opposition forces in Aleppo are so inaccurate and so randomly destructive that their use is per se illegal and thus constitutes either the direct or indiscriminate targeting of civilians and civilian objects which is prohibited by IHL. This conclusion is only bolstered by the evidence that both sides launched attacks against civilian areas that were not even remotely proximate to any legitimate military targets. Even if such targets had existed, the use of barrel bombs and hell cannons would still be unlawful because of the disproportionate damage these weapons inflict on civilians and civilian objects.

This article was prepared for publication by Marisa Rodrigues, an Assistant Editor for JURIST Commentary. Please direct any questions or comments to her at
Opinions expressed in JURIST Commentary are the sole responsibility of the author and do not necessarily reflect the views of JURIST's editors, staff, donors or the University of Pittsburgh.
Subscribe to JURIST